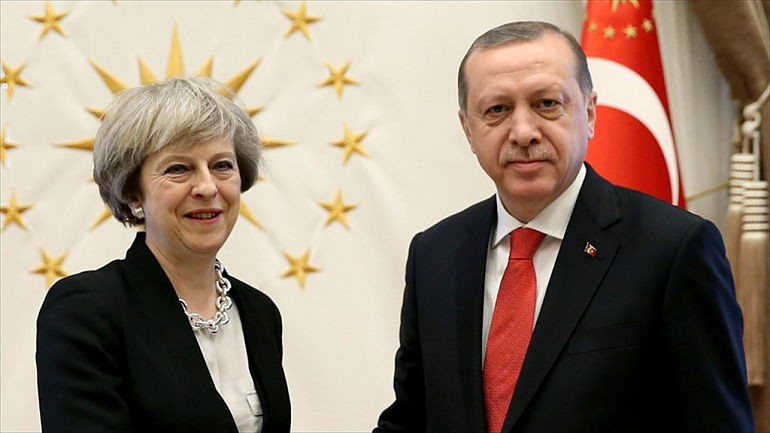 According to reports in the Turkish press, German Chancellor Angela Merkel has suspended arms deliveries to Turkey. This suspension appears to have come in response to the increasingly irrational behaviour of Turkish President Recep Tayyip Erdoğan, who has recently likened the governments of Germany and the Netherlands to the Nazis. Merkel is apparently making it clear that Germany will not tolerate such insults. But fellow NATO ally Theresa May still seems to have no interest in standing up to Turkey.

The UK and Turkey

Theresa May’s government is so preoccupied with Brexit that it appears to have little interest in conflict (or the consequences of conflicts elsewhere). Unless that means selling arms, of course.

Indeed, May was quick off the mark when she flew to Ankara to meet Erdoğan earlier this year. Her mission was to sign a £100m jet fighter deal with Turkey. Also, between July and September 2016, the UK sold Turkey £26m-worth of armoured plate, body armour and helmets. As well as £8.5m-worth of aircraft, helicopters and drones. And almost £4m-worth of licences for missiles, bombs and “counter-measures”.

May could stand up to Turkish provocations and show solidarity European allies which Erdoğan has insulted recently. But given her record so far as Prime Minister, that looks unlikely.

Turkey, the EU, and NATO

In the latter stages of the recent election campaign in the Netherlands, tensions rose between the Dutch and Turkish governments. And hundreds of Twitter accounts were hacked via Twitter Counter by apparent supporters of President Erdoğan. The tweets accused the governments of the Netherlands and Germany of being Nazis. And Turkey’s insults have continued.

Erdoğan has made it clear in recent days that he is considering giving up on the ‘European project’. If that happens, he is likely to turn to Russia for arms and abandon NATO altogether.

Additionally, Turkish Foreign Minister Mevlüt Çavuşoğlu said earlier this month that his government was looking into cancelling the EU-Turkey refugee deal. The deal provided €6bn for Turkey to care for the millions of refugees in the country. It also included an escalation of the process to allow visa-free travel for Turkish nationals within the Schengen area of the EU. If the deal ends, Europe may need to accept more refugees and provide far more support to those fleeing conflict in the Middle East.

Alliances in the Middle East, meanwhile, are also likely to change. Last year, Turkey allegedly made a secret pact with Syria, with Russian support, on how they could manage regional conflicts to their mutual advantage. That pact could become formalised if Turkey leaves NATO. And with Turkey recently blocking training events with NATO members as part of its diplomatic dispute with EU countries, such a separation no longer seems so improbable.

Erdoğan’s insults are particularly ironic given that his own regime has: forged an alliance in recent years with neo-Nazis; organised the destruction of majority-Kurdish cities and towns in Turkey; been frequently accused of supporting and arming Daesh (Isis/Isil) and other jihadi groups in Syria; and cracked down of human rights in Turkey (especially since the post-coup purge in 2016).

Also, the UN recently published a damning report on the massacres of Kurds in Turkey by government forces. The report estimated the number of displaced people as a result of the conflict as between 355,000 to 500,000 (section 47, p14) – who were “mainly citizens of Kurdish origin”.

On 16 April 2017, the Turkish people will vote in a referendum to decide if Erdoğan should be granted extended powers. But Germany’s strong action against Erdoğan’s regime shows that even Turkey’s closest allies are not too happy about the prospect of Erdoğan further cementing his already dominant role in Turkish politics. Theresa May’s relative silence and inaction, meanwhile, strongly suggests that her government values multi-million-pound arms deals much more than human rights.

– Ask the Prime Minister and your MP to urge the Turkish regime to resume peace talks with its Kurdish communities; and to respect freedom of speech and human rights.