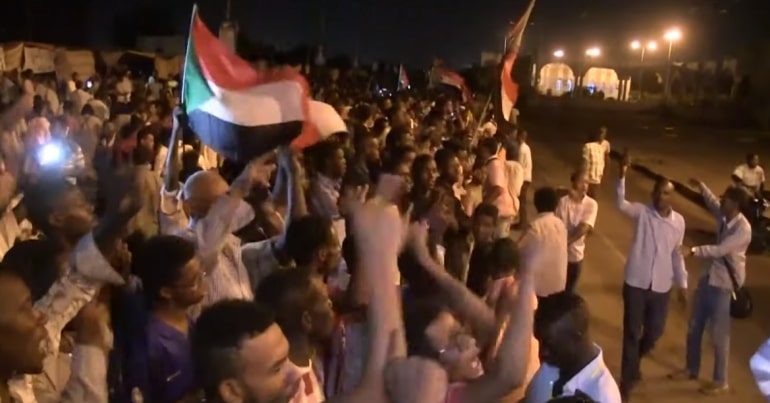 As widespread popular protests continued in Sudan, military forces began a brutal new crackdown on 3 June. The death toll is currently at 100, and is expected to rise.

Sudan has been gripped by mass protests since December 2018. The government had previously implemented a set of austerity measures with the backing of the International Monetary Fund (IMF). Rising food prices and the struggle for free elections have sustained popular unrest.

The protests achieved some success in forcing Sudanese dictator Omar al-Bashir to step aside after nearly three decades in power. The country’s main power structures centring around the military, however, remained. The Sudanese military junta which took power after al-Bashir has promised future elections, but the Sudanese protesters have demanded immediate civilian rule. For weeks, there was a sit-in at the military headquarters to try and pressure the junta.

Trade unions and women have led the protests; 22-year-old student Alaa Salah, for example, has become the face of the ‘revolution’.

Some observers, however, are concerned that the situation could be harnessed and manipulated by external powers – notably the US, Saudi Arabia, and Israel – to install a more friendly authoritarian regime.

Sudan’s Rapid Support Forces (RSF), also known as the Janjaweed militias, are widely feared in the country. They have a legacy of brutal repression: in 2005, they reportedly attacked and terrorised civilians who had already been victims of violence. As Human Rights Watch writes:

there is irrefutable evidence of a Sudanese government policy of systematic support for, coordination of, and impunity from prosecution granted to the “Janjaweed militias,” a policy that continues to this day.

The Sudanese government relied on these militias to undertake its brutal counterinsurgency operations in Darfur.

The latest repression – reportedly by a force of 10,000 of such militiamen – began in Khartoum on 3 June. 40 bodies have reportedly been “pulled from the [river] Nile in Khartoum”, and 100 people have been confirmed dead. This toll, however, is likely much higher. And as the Guardian reported:

Activists estimate 10 people were killed on Tuesday, five in the White Nile state, three in Omdurman and two in Khartoum’s Bahri neighbourhood. The dead included several children, one aged eight.

Ahmed Kaballo is a Sudanese-British journalist and activist. He spoke to The Canary about what’s going on in Sudan, and news from his family there:

100 killed many of them dumped in the river on the last day of Ramadan. The Sudanese massacre indicates three things: the so-called Transitional Military Council [TMC] are determined to stop Sudan transitioning towards a civilian-led democracy; the TMC couldn’t care less about their public image in Sudan or around the world; and finally, the massacre happened after trips to Saudi Arabia, Egypt and the UAE, so many within Sudan feel it was sanctioned by one if not all of these regional powers.

The Janjaweed are occupying Sudan. They are terrorising Khartoum and Omdurman the same way they terrorized Darfur. My two cousins were beaten up on Tuesday outside my Great Aunt’s funeral for breaking their fast on Tuesday (which was Eid for many) instead of Wednesday.

They beat up my uncle on the same day who is in his 70s. All the roads are closed, and anyone caught driving is whipped out of the car and beaten by 30-40 cowards from the RSF.

A female protester on the ground, meanwhile, told The Canary on 3 June:

Barricades now fill the streets. And we will return to the protests in the streets just like in December.

The UK government has provided some arms to Sudan over the past two decades. According to Action on Armed Violence (AOAV), these sales should cause concern given:

there is no sufficient guarantee in place to ensure that these [dual use] items will not be exploited to facilitate human rights violations.