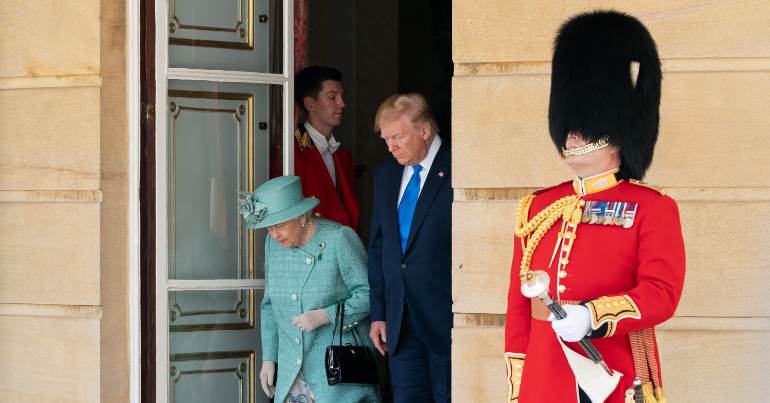 Donald Trump has been celebrating his trip to the UK as a great success. During the official state visit, he attended a banquet and inspected the guard with the queen and other members of the royal family. But now that the visit is over, it’s emerged that Trump has long fabricated stories about the royals to promote his businesses.

On 5 June, a CNN report emerged showing that, between 1981 and 1995, the US press made several claims that members of the royal family were either “looking into or joining one of Trump’s properties”. This included reports in 1983 that then-newlywed Charles and Diana had plans to purchase an apartment in Trump Tower in New York City. About a decade later, Diana was again said to have been interested in buying a property in one of Trump’s building.

Many of the stories first appeared in New York City tabloids but found their way into more respectable outlets such as the Boston Globe and Associated Press. But Buckingham Palace categorically denied all of the claims. And according to four biographies, Trump himself was apparently the source for all of the stories. In other words, he simply made up the claims and leaked them to the New York tabloid press for publicity.

Twitter has been erupting in mockery over the revelations, which once again highlight Trump’s past (and present) as a shameless self-promoter and unscrupulous liar.

Another Twitter user pointed out the irony of how Trump constantly claims (falsely) to be a victim of fake news when he himself created it for decades before becoming president:

Donald Trump didn't invent fake news, but has been a skilled practitioner for a long time. Here's an example: for years he used the royal family to gin up publicity for his properties @CNNPolitics https://t.co/vxVtPGdsHQ

Another person alluded to a radio interview Trump did with infamous ‘shock jock’ Howard Stern, in which he said he would have liked to have dated the then-recently divorced Diana:

Trump's always been a pig (article describes how he'd like to date Princess Di & become King)
How Trump for years used the royal family to gin up publicity for his properties – CNNPolitics https://t.co/c4zYrl5Q6f

The CNN report also points to false claims made by Trump about the Windsors wanting to join his Florida Mar-a-Lago club. Trump even boasted that he “handled the applications myself,” and said that he was ‘excited” about them joining. But a Buckingham Palace spokesperson described the claim as “complete nonsense.” Speaking to the Palm Beach Daily News, a local Florida newspaper, the spokesperson added:

This story was concocted by Mr. Trump to secure publicity for his club. It is a matter of regret that he feels he can use the names of the members of the royal family to do so.

Clearly, throughout his career, there are no depths of dishonesty to which Trump will not stoop in his narcissistic drive for publicity and profits. That the royal family appears to have forgotten it all and, along with the Tory government, rolled out the red carpet for him is a sorry indictment on their lack of standards and integrity. And it speaks volumes that the major figure in British politics that spoke out against Trump was Jeremy Corbyn.

Featured image via The White House/Flickr