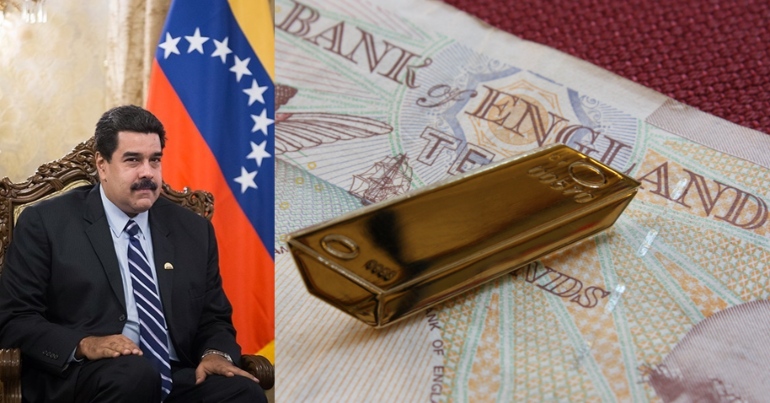 As The Canary has extensively reported, since January 2019 Venezuela has been subjected to a US-backed coup attempt. The putsch began when a previously unknown member of Venezuela’s legislature declared himself ‘interim president’. He was quickly recognized as the oil rich South American country’s legitimate leader by the US and most of its Latin American and Western European allies, including the UK government of then-prime minister Theresa May.

As part of the coup attempt, the Bank of England unilaterally froze assets belonging to Venezuela. But the beleaguered nation will soon have the opportunity to recoup its stolen property in court. And as the case’s hearing approaches, the UK government has made one last desperate move. Evidently, it hopes to salvage whatever’s left of its international credibility by avoiding the likely embarrassment of having to hand it back to its rightful owner.

A sycophantic gesture that backfired bigtime

On 19 July, the UK government issued a statement reconfirming its support for Venezuelan coup attempt leader Juan Guaidó. It appears that the move could be intended to bolster the UK’s position ahead of a legal bid by the Venezuelan Central Bank (BCV in its Spanish initials). Acting on behalf of the democratically-elected government of Nicolás Maduro, the BCV seeks the repatriation of gold held by the Bank of England. Reports differ on the exact value, though estimates usually fall within the range of just below $1bn to $1.8bn. Legal representatives from both sides appeared in court shortly before this report went to press.

About a month after the coup attempt was launched, in the face of growing sanctions and US hostility, the Venezuelan government requested a return of the gold to Venezuela. However, the Bank of England froze the assets on the spurious basis that the Maduro government was no longer the rightful government of Venezuela. The UK government then pressured the Bank of England into instead granting access to the funds to Guaidó. This move was based on its recognition of him as Venezuela’s rightful leader. Experts in international affairs quickly pointed out that the UK’s action flies in the face international norms of behavior.

Moreover, just a few months after the beginning of the coup attempt, it became increasingly clear that Guaidó had failed to overthrow the government. As the months turned into years, Guaidó began to cut an increasingly pathetic figure. And since he never seized the reins of the Venezuelan state, his political faction slowly degenerated into a shadow government with no real power. The BCV, meanwhile, filed a lawsuit against the Bank of England in May 2020. As part of the suit, it requests the return of the roughly 14 tonnes of gold to Venezuela. But so far, the Bank of England has refused to comply, precipitating a protracted court case.

Major victory for the BCV in court of appeal

In October 2020, the BCV won a major victory. A UK court of appeal overturned a decision that had earlier ruled that UK recognition of Guaidó constituted legitimate grounds for not handing the government over to the Maduro government. Now, it looks like the BCV is on the verge of outright victory. And the significance of this cannot be overstated; the gold represents roughly 15% of Venezuela’s entire foreign currency reserves.

As part of its case, BCV’s lawyers argue that the Venezuelan government needs these funds in order to strengthen the country’s response to the  coronavirus (Covid-19) pandemic and increase investment in its health service. This seems perfectly reasonable, not least because Venezuela has struggled with both these goals in the face of crushing US sanctions and an economic crisis that has lasted roughly seven years. In February, as a result of these factors, United Nations rapporteur Alena Douhan, an expert on unilateral coercive measures, called on the UK and other European states to “unfreeze assets of the Venezuela Central Bank”.

The UK’s position with respect to the coup attempt, meanwhile, has become increasingly desperate and isolated. As The Canary reported in January, the European Union (EU) withdrew its recognition of Guaidó as Venezuela’s legitimate head of state. This was because his party had boycotted elections to the National Assembly, Venezuela’s legislature, and therefore he no longer even held a seat in the body.

Guaidó’s claim to the presidency was based on a provision of the Venezuelan constitution that says that the head of the National Assembly assumes the presidency in the case of a breakdown in democracy. Though this claim was itself highly dubious in the first place, the EU at least had the decency to follow the logic to its natural conclusion. And so, because Guaidó was no longer even a member of the National Assembly, let alone its leader, it concluded that it could no longer support his claim to the presidency.

This latest saga exposes how the UK’s position on Venezuela has become an increasing embarrassment. Clearly, a return of the gold to its rightful owner would be a major victory for national sovereignty and international norms of behavior, as well as another nail in the coffin of the Tory government’s credibility when it comes to international affairs.