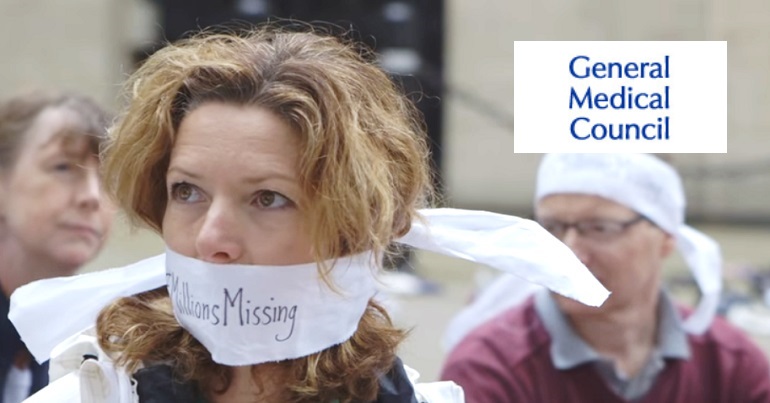 A response from the General Medical Council (GMC) to hundreds of complaints has effectively abandoned 250,000 disabled people. It also demonstrates the GMC’s contempt for the patients it’s supposed to protect. Moreover, in dismissing patient’s concerns, it’s whitewashed what one MP believes could be the “biggest medical scandal of the 21st century”.

The GMC and ME

The GMC is responsible for the conduct of medical professionals registered with it. It states its aim is to “work to protect patient safety”. But after hundreds of people wrote to it as part of a coordinated complaint, these words appear completely hollow.

Myalgic encephalomyelitis, or ME, is a chronic systemic neuroimmune disease. For decades (and often still to this day), the medical profession has not properly recognised it. People living with ME have been disbelieved, stigmatised, given incorrect treatment, or told it’s ‘all in their heads’.

I witnessed it first hand just last week. A somewhat renowned neurologist told my chronically ill, disabled girlfriend that ME had psychological causes; “somatisation” as it’s known in the medical world. They said that psychotherapy was the best form of treatment. Their words were like a train hitting my girlfriend, who was still in floods of tears days later.

This neurologist’s thinking may well have been derived from the notorious PACE Trial.

In the UK, CBT and GET are still the NHS’s approved treatment under guidelines from the National Institute for Health and Care Excellence (NICE). But NICE is undertaking a review of this. And on 21 August, over 100 academics and 10 MPs published an open letter calling for the PACE Trial to be reviewed.

So, why would some of the UK medical profession still push a trial that was fundamentally flawed?

In some people’s opinions, including mine, the PACE Trial was, in part, a cover to deny medical treatment and financial support to people living with ME. This is because of the funding from the DWP, and some of the authors’ conflicts of interest with the insurance industry.

Essentially, if people living with ME try CBT or GET, and they don’t work, the DWP and insurance companies can pin the blame for this onto patients. This is because the official clinical trial shows that ‘Hurrah! CBT and GET are effective!’. Therefore, this leads back to the psychosomatic allegations against patients; either they are ‘not trying hard enough’, or their symptoms are ‘all in their heads’. Ultimately, this enables the DWP to deny people benefits (as it can claim ME isn’t ‘real’). It also means insurance companies can deny people cover, or not pay out for other treatments.

Many in the medical profession, consciously or not, are complicit in pushing this damaging, noxious agenda.

So, it was the PACE trial that people were complaining to the GMC about. But the GMC has refused to take action against the PACE trial authors who are registered with it. And it’s hard to overstate how irresponsible this is.

You can read the GMC letter below. In short, it claimed it was not willing to act over the PACE Trial because:

these concerns are part of an ongoing academic and scientific debate, rather than matters which would raise concerns about an individual doctor’s fitness to practice; from the information provided, we haven’t identified anything which demonstrates that doctors have acted dishonestly or with intent to be misleading.

Although it’s hard to know where to begin with why this is such unfettered bullshit, I’ll give it a try.

Two PACE Trial authors are registered with the GMC:

It’s unclear if the other authors are registered with the GMC. But Maurice Murphy and David Wilks are both Fellows of the Royal College of Physicians, and there are matching names on the GMC register. And Simon Wessely, a somewhat notorious psychiatrist in all of this, was a “centre leader” where the trials were carried out. His GMC number is 2724740.

Contrary to what the GMC says, I believe the doctors registered with it all acted either “dishonestly” or “with intent to be misleading” during the trial. And they have been ever since.

A catalogue of disgrace

Firstly, the authors moved the goal posts of the trial midway through to make the results look better. As I previously wrote, a reanalysis this year based on the trial’s original criteria shows the results had been drastically over-inflated to look like people were improving with CBT and GET. In fact, most people don’t – and many report a worsening of symptoms. Essentially, the authors, including GMC-registered Sharpe and Angus, exaggerated the results. This, in my opinion, was to make them fit in with what they wanted to see.

Then there’s the conflict of interest. Sharpe specifically declared that he had:

Does working for the same people who want your clinical trial to fit their financially-driven desires ring true with the GMC’s ethics? I don’t think so.

There’s also an issue around the trial’s authors allegedly not telling the patient participants of their links to the insurance industry. This raises ethical issues around ‘informed consent’.

In the interests of balance, you can read a response to criticism from the PACE Trial authors here. But this just adds fuel to the fire in my opinion, as they are still denying to this day that they did anything wrong.

The real-world effects of a trial

There’s one more disgraceful thing that the GMC has whitewashed in its flaccid response. That’s the harm the trial, and its GMC-registered authors, have caused.

The real world effects of the PACE Trial on people are horrific. And its authors should answer for this.

For people living with ME and other chronic illnesses, they’ve been here too many times before. Abused by the state, the medical profession, and the media, theirs is a long and torturous path to tread. But when you’ve been beaten down so many times you often find a resolve that becomes unflappable. Even in the face of the most horrendous adversity.

So, fuck the GMC. The “Millions Missing” have fought on this far without it. Their strength lies within themselves, their loved ones, and their community. And their battle will continue, regardless.

– Find out more about the Millions Missing campaign and donate to its crowdfunder.

Featured image via the GMC – screengrab and ME Action Network – YouTube