Why the government acts like it’s doing amazingly - The Canary 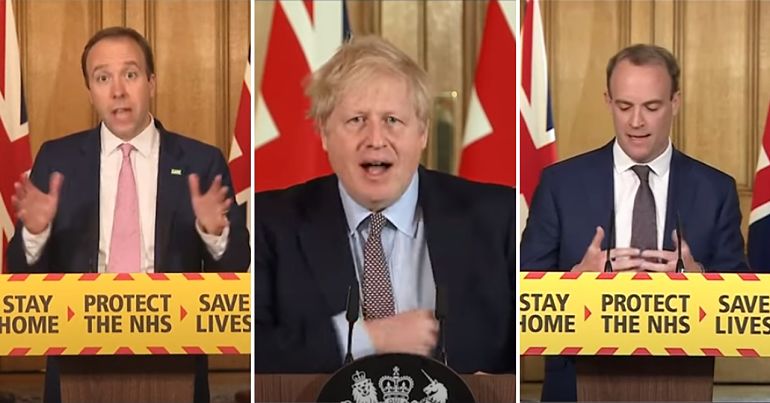 A few days ago, a friend made the following observation:

I can’t fucking stand seeing the government tweet shit like this. They’ve completely shit the bed and are still pretending like everything’s going great. What is wrong with these fucking goons?

The tweet came from Matt Hancock, who plays Tigger down in the Hundred Acre Shithole that is the Westminster Village. The political equivalent of Paul Whitehouse’s “Brilliant!” character from The Fast Show, Hancock embodies the Johnson government’s embrace of enthusiasm over ability.

But what’s really behind this constant pretence from ministers that the government is doing amazingly?

I think it’s a combination of things:

To be fair, you wouldn’t expect ministers to turn around and say: ‘You’re right. We’ve made a total Horlicks of the whole thing and we think we should be fired immediately.’ That, in some ways, would be even more worrying. Much of our adversarial political system is not necessarily about doing a good job but about giving the impression that you’re doing better than the other lot would do. So, often, rather more effort goes into creating that impression than focusing on the job.

Misdirection and propaganda are two of the most effective tools of the spinner’s trade. And Hancock is a dab hand at both. He spends so much time wittering absolute bollocks that it becomes difficult to tell if what he’s saying is important, relevant or even true. And he has a willing sidekick in the establishment media. So whether he’s blaming sunbathers for the failure of government policies or gushing over the Daily Mail doing something that should be standard 9 to 5 stuff for the state, the result is the same. He avoids talking about what he himself should be doing. With no details to get in the way, Hancock is free to imagine a world in which he’s a first-class health secretary.

His guru, of course, is Boris Johnson. Everything about Johnson is designed to distract. The state of his hair, the fit of his suits, his pompous turn of phrase. And that’s just Johnson on easy mode. Recently, world events have required him to level up. So he’s become the living embodiment of the phrase ‘life comes at you fast’. In a short space of time, Johnson has started a new job, moved house(s), hired and fired any number of staff, got a divorce approved, got engaged (those last two within moments), announced he’s expecting a child, had a serious illness, and become a dad (again). If he carries on working his way through the list of major life events, by the end of the year he’ll have suffered a bereavement, won the lottery, discovered a long-lost relative, run a personal best marathon, completed either a course of therapy or a major decluttering exercise, and become a grandparent. Now many of these, both real and predicted, could be well beyond his control. But they seem to get in the way of us – and, crucially, him – remembering that he’s supposed to be running the country.

And that’s ‘running the country’, not just ‘being the leader’. Johnson has always been strong on description but light on detail. His announcements, like those of his friend-over-the-water, have a tendency to disappear under tsunamis of adjectives. Everything is ‘marvellous’, but we’re not quite sure exactly what it is. And so it was that Johnson’s leadership scaled new heights of inexplicable popularity when he was doing nothing at all. When coronavirus (Covid-19) put him on his back and confined him to intensive care, Johnson somehow became the crisis figurehead the nation needed. The propaganda machine cranked into overdrive and we went into full ‘dear leader’ territory. To think that similar sections of society had derided Corbynism as a personality cult. Anyway, Johnson’s doing ‘amazingly’ and the government is doing ‘amazingly’. That was the message.

A world in which Dominic Raab can become acting prime minister is a world in which dreams really can come true. Raab seems like he’d be under-qualified to own a TV licence, let alone be an MP, a cabinet minister, or foreign secretary for fuck’s sake. This bloke – with his limited knowledge of Dover’s role as a port and what country, or indeed continent, Lima is in – is our man for global affairs. How? Well, obviously as part of a government in which a woman sacked for behaviour that bordered on the treasonous is now in charge of law and order. Clearly, being gallopingly unsuitable is now the best qualification for high office.

In these circumstances, ministers must wake up every morning and leap out of bed shouting: ‘I’m the king of the world!’. They must feel amazing. Because they’re obviously doing amazingly. Everyone more than a country away can see that the UK (particularly England) is making a tragic, scandalous, disastrous hash of dealing with the pandemic. Yet in the heart of government, there’s such a culture of ineptitude that failure becomes unrecognisable. With no exacting standards to meet, spin can take over and ministers can spend their days going on about how well their colleagues are doing.

Total insulation from the negative effects of all their incompetence means ministers wouldn’t realise if they weren’t doing amazingly.

All this government shithousery has prompted calls for some sort of inquiry into what’s gone wrong and what could have been done better. The inquiry could complete its work in 5 seconds by writing out the band name Everything Everything. But we know that, in reality, even if an inquiry ever happens – if we ever reach a time when it’s not ‘too political’ – it’ll probably be an exercise in can-kicking. And experience also tells us that the consequences will be increasingly minor the further up the chain of command we go.

So at a functional level, among mid-ranking scientists or NHS managers, careers may be ruined and reputations trashed. But of the supposed decision-makers in government, even those who have to fall on their swords in order to show that ‘lessons have been learned’ will be recycled, either as future ministers or as members of the House of Lords. Or they’ll fall into the comforting embrace of company directorships and lucrative committee roles. They won’t emerge from the pandemic facing ruin, unemployment, homelessness.

And unlike some in the country, they aren’t facing those things now. The chaotic and unevenly applied lockdown hasn’t put them out of work. It hasn’t left them wondering how, or if, they’ll be able to get food. It hasn’t driven them from their homes. Yes, trying to get Zoom to work is a fiddle and you might be able to hear someone’s daughter’s clarinet practice during a meeting. But that’s all fun and games and so relatable and doesn’t matter one fucking jot.

And, of course, they just got tagged in a tweet from Matt Hancock telling them they’re doing amazingly. Brilliant!