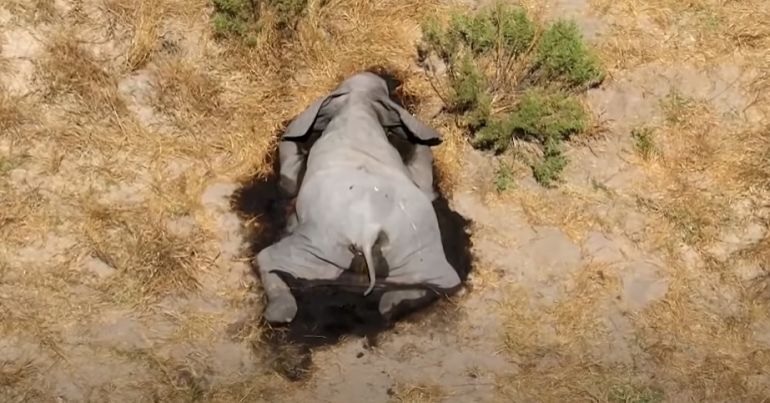 Hundreds of elephants in Botswana are dropping dead, literally it seems. Heart-wrenching images of elephants lying face down in the dirt, as if they just suddenly keeled over, have circulated. So far, the reported death toll stands at over 350. And no-one knows what on earth is causing the mass casualties.

Despite the mystery surrounding the elephants’ deaths, however, the tragedy has made one thing about Botswana’s recent political – and ecological – trajectory crystal clear. But this crucial context is largely missing from the media’s reporting on the deaths.

Wildlife authorities announced the mysterious dying off of the country’s elephants in May, although the deaths appear to have started in March. The reported numbers began at 22, then went to 56, and rose to 110 by the beginning of June. At the time, Wildlife officer Dikamatso Ntshebe said:

We are still experiencing elephants dying in the Okavango Panhandle. We also see elephants that show that they are sick and are on the verge of dying.

Now the death toll stands at over 350 – up to 400 by some counts. The authorities said initial tests ruled out the disease anthrax and poisoning. As conservationist Vicky Boult also recently pointed out:

in the event of poisoning, we would expect to see other species dying as well, either because they drank from the same poisoned water source or because they fed on the poisoned carcass of the elephant, and this has not been reported.

The Botswana authorities claim poaching isn’t the cause due to the elephants still having their tusks. In early June, the government said it had arranged for further tests to be carried out by South Africa. But now the government says it has only “identified” laboratories in Canada, Zimbabwe, and South Africa “to process the samples” it’s collected from dead elephants.

The delay has caused consternation. Boult says “it’s vital that investigations are expedited so that the cause of death can be determined and suitable action taken”. Dr Niall McCann is the director of the charity National Park Rescue, which is based in the UK. He likened Botswana’s elephants to the diamonds which are its most lucrative asset in monetary terms, and commented:

It’s a conservation disaster – it speaks of a country that is failing to protect its most valuable resource.

Until fairly recently, Botswana had a reputation for being a safe haven for elephants. That’s because the country banned trophy hunting in 2014 and armed its anti-poaching units. Its sanctuary-status wasn’t lost on the elephants themselves either, with around a third of Africa’s remaining populations limiting their roaming to the country.

But another president came along in 2018 and undid these protections. Ian Khama’s successor Mokgweetsi Masisi disarmed the anti-poaching units quickly, without explanation. The effect was felt near instantly. Elephants Without Borders found the carcasses of 87 elephants in the country while carrying out a census. Masisi’s government denied these deaths were all a result of poaching despite the conservation group finding all of them with “their skulls chopped to remove their tusks”.

Lifting the trophy hunting ban took more time. 2020 was due to be the first season, after holding hunting auctions earlier this year. The coronavirus pandemic forced a surprise delay on the hunters’ expected killing spree. But Botswana’s government offered the industry an effective bailout by announcing an extension to the hunting season in April.

Masisi and his government have laid the blame for their decisions on the elephants themselves. As independent wildlife economist Ross Harvey wrote in the Revelator:

The president and other cabinet members have repeatedly peddled the view that there are “too many” elephants and that they are responsible for environmental damage and increased human-elephant conflict.

In an open letter to the president, a group of conservationists noted that, while they were in “full agreement” that “equitable solutions must be found” to any conflict occurring between humans and elephants:

we are concerned that much of the rhetoric is giving the impression that conflict is both unavoidable and unresolvable.

In short, the narrative ‘peddled’ by Masisi’s government was that peaceful co-existence between humans and other animals was only possible by eliminating a hefty number of those animals of one side of the conflict – and monetising those killings in the process.

Careful what you wish for

Is it any surprise then that Botswana’s government is presiding over a “conservation disaster”? Masisi and his government’s actions and rhetoric have set the stage for such a disaster, should the cause of the elephants’ deaths turn out to be poisoning by poachers or communities.

Disease is another possible culprit. Of course, the whole world has recently awakened to the catastrophic threat that emerging diseases pose, including ones that transfer between humans and other animals. But such an outcome would not put Masisi’s leadership in any better light. Because he inherited a country that, as already mentioned, around a third of the world’s remaining wild elephants called home. He took on that responsibility amid a global climate and biodiversity crisis. Within these crises, as Mongabay puts it, elephants “no longer have room to maneuver: they are trapped between climate change, habitat destruction and poaching”.

But what did Masisi choose to do in that situation? What ‘answers’ did he have? He advocated – and drew up policies – to kill elephants. He instantly opted for the wholly unoriginal and highly contested strategy of ‘killing to conserve’.

We’re now at a point where the climate crisis or a deadly disease could trigger a collapse in the remaining populations of elephants and, indeed, many of the world’s threatened species. We need visionary leadership on a global scale, leaders who recognise that we – meaning all the world’s animals and the natural world at large  – get through this together or we don’t get through it at all. Clearly Masisi, and the vast majority of current world leaders, are completely lacking in such imagination or insight.