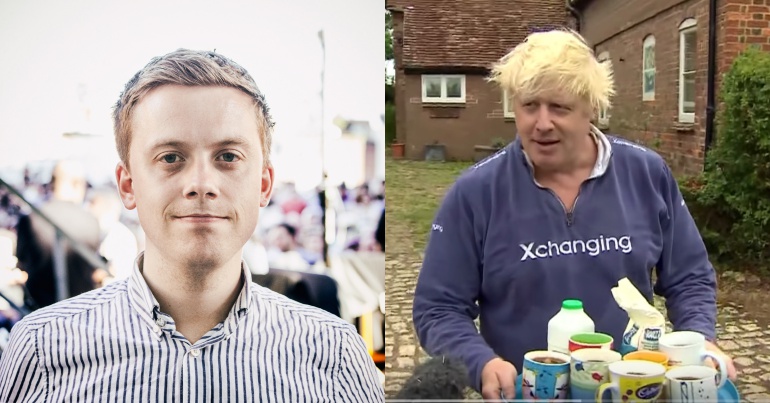 Campaigner and journalist Owen Jones called the UK media an “utter disgrace” after a clip of Boris Johnson offering journalists tea went viral. His takedown of Johnson is just perfect, because Johnson still hasn’t apologised for his Islamophobic comments about Muslim women.

Some Conservatives – including PM Theresa May and Baroness Sayeeda Warsi – called on Johnson to apologise. An internal party investigation will examine the Islamophobic content of his remarks, which one Conservative MP says could cause “open warfare” among Tories.

But Jacob Ress-Mogg defended him. So too [paywall] did his father and sister. Fascist Steve Bannon also waded in to support Johnson. The former Breitbart editor used a Times interview to praise both Johnson and far-right ‘leader’ Stephen Yaxley-Lennon (aka Tommy Robinson). He further claimed the Tory MP would make “a great prime minister”.

But Johnson has not apologised. So when broadcasters sent a video of him serving tea viral, Jones called them out:

What an utter disgrace the British media is. A super privileged bloke whips up bigotry against Muslim women, his brother and sister have columns defending him, he’s then rewarded with a viral clip of “journalists” going weak at the knees at his contrived patter. Pathetic. https://t.co/rfR8Q4v6ty

Letting Johnson off the hook

Journalists who were present failed to get any comment from Johnson. But the clip of him refusing to say much beyond “would you like a cup of tea?” went viral. And Jones was spot on – too many people seemed “charmed”:

You just provided Boris Johnson with a viral video, free of charge, featuring the British press being charmed by a bigoted charlatan offering cups of tea. And if only you were as good at scrutinising the frontrunner to be next Tory leader as you are my grammar. https://t.co/1MoIgwc6Pw

It really did get Johnson “off the hook”:

It quite literally did get him off the hook, everyone can watch the video with their own eyes, and it features "journalists" let Boris Johnson get away with answering no questions and instead getting goo-eyed over cups of tea. https://t.co/xMx54XWxA1

Others turned to journalistic moments from the past to highlight quite how ludicrous Johnson’s tea stunt was:

Frost: Would you say that there are certain situations where the president can decide that it's in the best interests of the nation, and do something illegal?

Nixon: Have a cup of tea.

Frost: Thank you very much. pic.twitter.com/PzA5orCXfk

And as Labour MP for Tottenham David Lammy pointed out, Johnson’s words seem to have had a chilling impact. Abusive acts and racist comments towards Muslim women have spiked:

Whilst boris plays the posh bumbling oaf bringing tea to reporters and refusing to acknowledge the impact of what he has done, Muslim women face yet more abuse from racists feeling legitimised and empowered by his comments. https://t.co/dOVJmEUp6q

Johnson doesn’t make ‘gaffes’; he insults thousands of people. He’s not a likeable ‘buffoon‘. Calling him ‘Boris’ or ‘BoJo’ only plays further into this constructed act. Because Johnson is a calculating Tory politician who is currently gathering support from the far right.

So Jones is spot on with his analysis of Johnson as a “bigoted charlatan”. His ‘tea party’ was a distracting stunt, and all journalists should call it out as such.

There was, as a Financial Times journalist pointed out, no reason for journalists to tweet out this video:

If you’re going to take tea from a politician you’re meant to be questioning, don’t video it

If you’re going to video it, don’t tweet out the video

If you’re going to tweet out the video, don’t praise the guy for playing you!https://t.co/vI5cWz8oVw

The press has the power to choose what becomes a story. So Johnson’s ‘tea party’ coverage says as much about the current state of the media in the UK as it does his racist comments, privilege, and refusal to answer direct questions. Because, right now, Johnson has a lot of serious questions he needs to answer.

– Support TellMAMA who are working to challenge anti-Muslim attacks.