The Tories tried to use the new Scottish economy figures to bash independence. It didn't end well for them. - The Canary 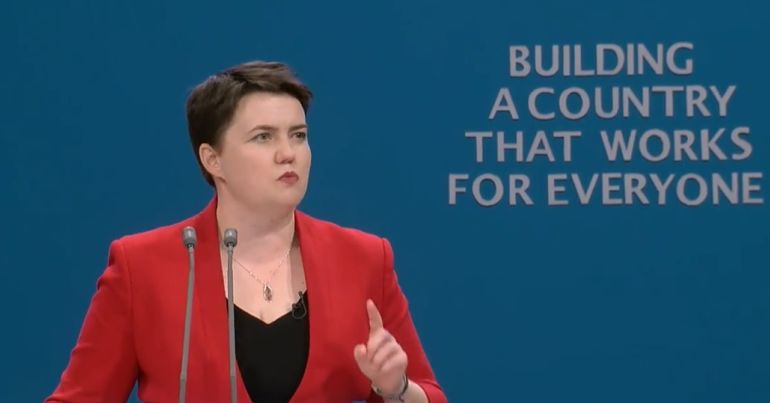 The GERS report can’t be used to understand the finances of an independent Scotland, because it reflects the economic and financial realities of Scotland within the United Kingdom. But that didn’t stop the Scottish Conservatives starting an old Scottish constitution debate on Twitter.

It didn’t end well for the Tories.

The Scottish economy and GERS

SNP strategist Ross Colquhoun took to Twitter to announce the key ‘take-aways’ from the GERS report:

🏴󠁧󠁢󠁳󠁣󠁴󠁿 Latest economic data points to an improving picture in Scotland. Our economy is growing twice as fast as the UK, unemployment remains close to its record low and confidence is returning to the oil sector. #GERS

📦 Scottish exports of goods increased 12% over the past year – the fastest rate of growth of any nation in the UK.#GERS

However, Scottish Conservative and Unionist Party leader Ruth Davidson did not delay in denouncing the idea of Scottish independence:

Today's #GERS figures – straight from the Scottish Government – confirm the benefits of union. £1576 more spend per head than rest of UK. https://t.co/KmtYe7SAWw

And SNP MP Peter Grant snapped back to inform Davidson that GERS doesn’t reflect the reality of an independent Scotland:

Actually #GERS figures tell us nothing about what would happen if Scotland’s economy was run in the way best suited to Scotland rather than as a branch of London but hey-ho, when did the Tories ever worry about the truth? https://t.co/VtasvRpGSe

It appears Davidson was jumping the gun, as nobody was even talking about Scottish independence.

SNP MSP Paul Wheelhouse also demanded an apology over the coverage of GERS by BBC News:

This is disgraceful @BBCNews – Your presenter clearly states that GERS says “…the Scottish Government last year spent nearly £13.5Bn more than it raised…”. This is a really serious factual error & I expect to see a equally prominent/high profile apology to @DerekMackaySNP! pic.twitter.com/GbAgpSw5vV

What #GERS shows us is the cost of the Union & its no cheap.

Voters also challenged the Scottish Conservatives on the way their compliance with Brexit put the economy at risk:

Ahhh. I see what you're saying. You think we need a much bigger economy. You're right of course but the only way to achieve that is through independence. Staying in the UK will make the economy much weaker,.. Why? Brexit of course.

I have yet to see your post brexit strategies for Scotland.
Could you tell us when they will be published?
Thanks.

And they questioned the economy continuing under the status quo:

The figures will only tell you the future if Scotland was run the same way as the UK right now surely? I'd hope Scotland would run things much better, have you seen the amount of cash the Tories have spent? Borrowed more money in 8 years than the govt did in the previous 100!

Others pointed out that Scotland is a country that is committed to equality and social justice:

Are you going to go in the huff. With Independence Scotland can move in the direction it favours, one more committed to equality and social justice. Many more resources than most successful small independent countries and more capable gov't than the debacle that is Westminstrer.

The Scottish Conservatives are using the GERS report for petty political advantage. The Tories continue to criticise economic performance in Scotland, yet are happy to go along with Brexit. For Scotland, the potential implications of Brexit could cancel out the progress made in its economy over the past 12 months.

So perhaps the Scottish Conservatives should stop obsessing about independence and get on with the day job.