Johnson ran away. And even Kuenssberg's excuses couldn't defend him. - Canary 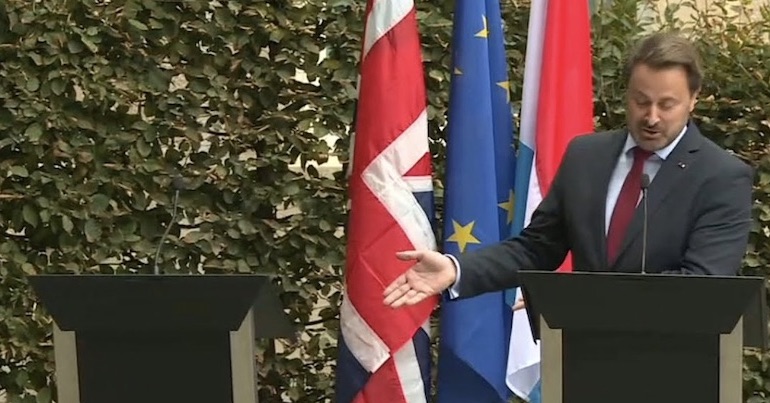 Boris Johnson dodged a press conference in Luxemburg. The BBC‘s, allegedly impartial, political editor Laura Kuenssberg tried to defend him. But even that wasn’t enough to save his bacon.

On 16 September, Johnson was due to give a press conference with Luxembourg’s prime minister Xavier Bettel. But Johnson failed to show up. He claimed the no-show was because:

there was clearly going to be a lot of noise and our points would have been drowned out.

Reportedly, a crowd had gathered shouting and booing the UK prime minister. Earlier in the day, Johnson was also jeered following a meeting with EU president Jean-Claude Juncker.

But Kuenssberg stepped in to defend Johnson:

Whatever side you are on, having been outside the presser that never happened, it would have been total pandemonium if it had gone ahead – protesters were shouting and chanting as loudly as they could within metres of the podiums

He could have led laura.

He could have listened laura.

He could by strength of personality quietened the crowd.

You could have filtered the audio.

He could be brave.

When a leader can't meet the led through fear of rejection you are no longer leading.#WilloPeople#FBPE pic.twitter.com/Jny4j6AJtN

Yet the right-wing press wasn’t far behind in defending Johnson:

The state of these.

How can anything be an "ambush" if the alleged victim has already run away before anything happened?#ChickenJohnson @lbc #Newsnight #r4today #PoliticsLive pic.twitter.com/IvgaqtYe4u

And as another BBC journalist noted, protests didn’t stop other Conservative prime ministers:

Boris Johnson skips a press conference because of a demo. I once watched Margaret Thatcher land in Zambia, charge down the aircraft steps in the dark into the middle of a hostile crowd & give an impromptu presser even though she'd been told people might throw acid at her.

Elsewhere, people’s response to Johnson’s no-show has been quite simply delicious. In his short time in office, the PM’s set himself up for some perfect takedowns.

In July, crowds in Scotland shouted “wanker” as Johnson met SNP leader Nicola Sturgeon. Instead of facing them again, he snuck out of Bute House via the back door. In a recent interview with the Mail on Sunday, Johnson referred to himself as the ‘Incredible Hulk‘. Meanwhile, right-wing papers labelled Labour leader Jeremy Corbyn a “chicken“.

From ‘The Incredible Hulk’ to ‘The Invisible Man’ . . . Boris Johnson hiding from reality yet again!
pic.twitter.com/JFB6OEl8h5
More like where is #Sulk
Regardless he can't take the heat
Remember Bute House
Don't forget the #BackDoorBoris Stunt

You can see it in their eyes.

You can hear it in their voices.

You and read it in their tone.

They are embarrassed too.

Brave Sir Boris ran away
Bravely ran away away
Protestors shouted for his head
He bravely turned his tail and fled
Yes Brave Sir Boris turned about
And gallantly he chickened out
Swiftly taking to his feet
He beat a very brave retreat
Bravest of the Brave Sir Boris #BackDoorBoris pic.twitter.com/wxpqbMwUQR

As some noted, Johnson also failed to show up to debates during the Conservative leadership contest:

Are you proud Conservative Party members? You were warned.

Others, meanwhile, took aim at his Conservative cronies:

Johnson’s behaviour creates perfect fodder for satire and full-scale piss-taking. But behind this, let’s not forget that he’s appointed a terrifyingly right-wing government, closed parliament at a crucial time and is marching the UK ever closer to a disastrous no-deal Brexit. So when the supposedly impartial Kuenssberg steps up to defend Johnson’s inability to attend a simple press conference, perhaps we shouldn’t be surprised. Because it simply reflects the state we’re in.