An Observer editor just tried to gloss over Boris Johnson's record. But the public set him straight. - Canary 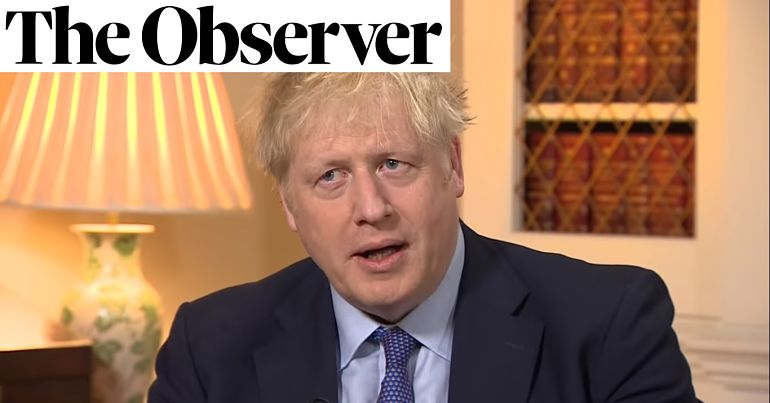 In the Observer on 19 January, political editor Toby Helm asked if the “real Boris Johnson” was “liberal, nuanced, cautious”. Helm’s article implied he was, and it also argued against Labour’s claim that Johnson would be “pro-Trump” or “the most rightwing prime minister the country had ever had”.

It was difficult to see where Helm was going given Johnson’s record. But he attempted to cleverly manipulate recent moves by Johnson’s government to present him as some kind of a ‘liberal saviour’. Needless to say, it got quite a reaction online, and people were keen to set the record straight.

Just a couple of things to begin with…

Helm claimed the rescue package for the airline Flybe was “oddly un-Tory”. The airline secured “a £10m tax holiday and confirmed ongoing negotiations over a state loan”. But this decision came in the wake of the bush fires in Australia and rising rail fares in the UK. So it flies in the face of the vital work needed to tackle the climate crisis. And such a move doesn’t really put much distance between Johnson‘s government and that of Donald Trump, who has previously dismissed climate change as a “hoax”. With this in mind, Labour may not be so “wide of the mark” in characterising Johnson as “pro-Trump”.

And while, as Helm stated, Johnson has legislated for extra spending in the NHS, billionaire Conservative Party donors continue to benefit from NHS trust contracts. Experts also believe Johnson’s spending is still insufficient.

Following the assassination of Iranian general Qassem Soleimani, meanwhile, Trump called the Iranian commander “a monster”; whereas, according to Helm, Johnson’s approach “was far more nuanced and closer to that of the rest of the EU”. Helm claims this may be tactical, as Johnson might want to “dial down the anti-EU talk” as Brexit approaches. But as Johnson is expected to open trade talks with the US in order to show “we mean business and we’re not messing around”, it doesn’t seem like he’s trying to create a cordial atmosphere with the EU. And when questions were put to Johnson about the assassination during PMQs, he couldn’t answer whether he opposed or supported any further retaliation.

The public get involved

Thankfully, plenty of people took to social media to remind us just how ridiculous the notion of a ‘liberal’ Johnson is. Labour MP Zarah Sultana reminded us of Johnson’s terrible record of highly offensive words:

Johnson is reactionary – his only real interest is getting power for himself and his class. https://t.co/IwV92OxDdA

Another person detailed Johnson’s shameful record so far on other crucial topics and policies:

No. He is none of those. Let's have a quick recap on what he's done with his month in power:

💥 trying to ban transport strikes.
💥Refused to release Russia report.
💥Let JHunt promise to bring back fox hunting.
💥Given peerages to his mates, including one notable racist.>>

💥Put a guy who writes for Spiked in charge of their internal islamophobia investigation.
💥Plans to axe the department delivering Britain’s foreign aid.

Another reminded the Observer editor of a few more Johnson home truths:

And others just showed their disgust for the newspaper for writing such an article:

It’s clear from Johnson’s record that his “rightwing poses” are not just about ‘advancing himself in the Tory party’. They are unfortunately real, as is his incredibly hard-right cabinet. His rhetoric may have toned down now that he’s in Number 10; but his policies have a real impact on British people’s lives and their environment. No amount of opinionated writing can gloss over that.