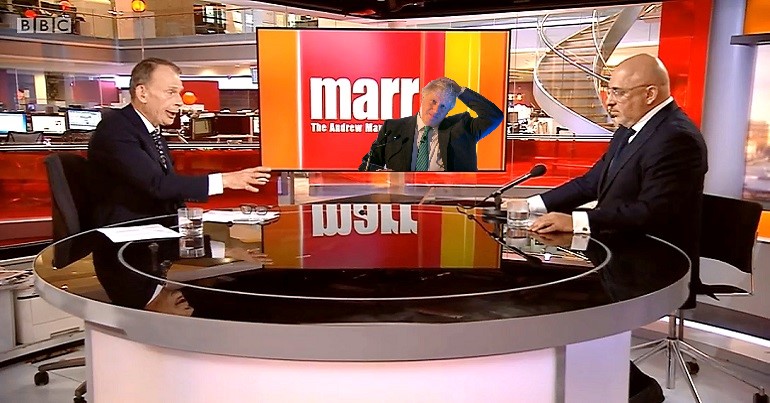 Millions of people have seen Boris Johnson lie. ITV‘s flagship breakfast show even allowed a debate about it. So, you may have been hoping the Andrew Marr Show was going to tackle the issue. But if you were – prepare to be disappointed.

A viral video on GMB

Peter Stefanovic is a campaigning lawyer. He’s been vocal on issues surrounding the NHS, disability rights, and others. Recently, a video he produced about Boris Johnson’s lies to parliament has gone viral. As of 12pm on Sunday 11 July, it’s had nearly 26 million views on Twitter alone:

Working TOGETHER we have sent a powerful message to UK News shows if they won’t hold this Prime Minister to account for his rampant lying in Parliament we will do it ourselves!

How long can you ignore it now @BBCNews @BBCBreakfast ?
pic.twitter.com/PlvEkEij1V

Until 7 July, the corporate TV media had not reported on Stefanovic’s video – nor Johnson’s lies. But then, Good Morning Britain (GMB) did. The show had Stefanovic on. He said:

So, would Marr follow GMB‘s lead and allow Johnson to be called a liar? Not likely.

Marr had vaccine minister Nadhim Zahawi on the show. First, the host showed a clip of the government’s chief scientific advisor Patrick Vallance. Vallance said that the vaccine “weakened” the link between cases and hospitalisations. But he noted it wasn’t a completely “broken” link. Zahawi said he agreed with Vallance, but he also knew where Marr was going with this.

Because the show then cut to Johnson during Prime Minister’s Questions (PMQs). The PM said that the vaccine had:

severed the link between infection and serious disease and death.

Marr put it to Zahawi that what the PM said was “wrong”. Of course, the vaccine minister defended Johnson. Then, Marr asked him if the PM had ‘misled’ parliament by saying this. Zahawi disagreed. But throughout this bit, Marr couldn’t bring himself to say the word ‘lie’:

Clearly, thinking the BBC‘s flagship Sunday political programme would call out the PM as a liar (or even allow a debate on whether he is or not) was too much to ask. It’s a damning indictment when the non-publicly funded ITV is holding our corrupt politicians to account more than the public service broadcaster is.