Could this happen to Corbyn if he wins the next election? - Canary 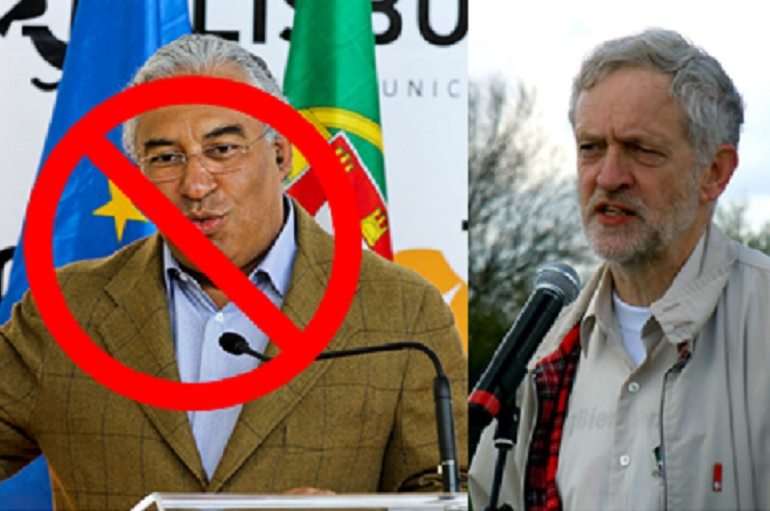 Portuguese elections on 4 October saw left-wingers win control of parliament. However, progressive ministers have not been allowed to govern. Would it be possible for the UK establishment to stop the labour movement of Jeremy Corbyn in the same way?

Unlike Syriza who were swept to power in Greece back in January, the Portuguese left have been prevented from forming a governing coalition by Portugal’s conservative president, who has instead given the incumbent right-wing prime minister control of a minority government.

The question for the left in Britain is: if our own head of state would dare to do something similar if progressives win a majority in 2020? The possibility alone suggests that we should work on joint electoral tactics sooner rather than later.

The rise and fall of anti-austerity politics in Greece

Earlier this year, we saw how Syriza effectively surrendered to what blogger Alex Andreou called a “Union of Bullies” (i.e. the economic and political elites of Europe), in spite of an overwhelming referendum in July which saw Greek voters reject the EU and IMF bailout plans. Greek prime minister Alexis Tsipras said former finance minister, Yanis Varoufakis, had made a big mistake by going against the people’s will.

Greece’s anti-austerity forces had lost their momentum, and Syriza’s win in September attracted little enthusiasm, with 45 percent of the electorate abstaining. For Kouvelakis, the EU was officially “at war against the Greek people”, and was using the country as:

a guinea pig to demonstrate what fate is prepared for all those peoples who mount the slightest resistance against neoliberalism.

According to sociologist Theodoros Karyotis, Greece’s experience had shown more than ever the urgent need for grassroots mobilisation.

The anti-austerity revolt in Portugal

For The Telegraph’s Ambrose Evans-Pritchard, the October victory of the Portuguese left was proof that:

The rickety scaffolding of fiscal discipline and economic surveillance imposed on southern Europe by Germany is falling apart on its most vulnerable front.

With debt levels high, unemployment stuck at 11 percent, and “the credibility of eurozone leadership … in tatters”, Evans-Pritchard asserts, the immense damage caused by official austerity policies was creating “a combustible atmosphere”. Without any improvement on the horizon, he insists, “powerful populist forces” looked set to gain power in Spain, Italy, and France. For him:

Political chickens are coming home to roost, and economic time is running out.

As The Canary has reported this week, the ramping up of government repression from Spain to the UK is fostering growing opposition from anti-austerity forces. And in Britain, Jeremy Corbyn’s victory in the Labour leadership contest was yet another clear sign of just how unpopular the economic status quo is.

In Portugal, though, the main party on the left was not as progressive as movements elsewhere in Europe. Essentially the Portuguese New Labour, Antonio Costa’s Socialist Party was unable to attract overwhelming support for its ‘austerity lite’ plans. Together with the Left Bloc and the Unitary Democratic Coalition (an alliance of communists and ecologists), however, they won a total of 122 of the 230 seats available in parliament. And for this reason, Costa has asserted that President Aníbal Cavaco Silva’s decision to reappoint pro-austerity prime minister Pedro Passos Coelho was a “waste of time”, as the left would simply unite to vote down Coelho’s programme anyway.

As a result of the surprisingly strong results for left-wing parties, says David Ferreira at Novara Media:

all three left parties expressed a cautious willingness to negotiate an alternative government.

For Ferreira, the Socialist Party would effectively have faced the same fate as Greece’s social democrats (Pasok) if it had chosen to support the conservative prime minister’s austerity policies rather than uniting with the smaller left-wing groupings. In other words, their own survival instincts meant they had little choice but to negotiate with the parties to their left.

Via a televised speech, President Cavaco attacked the smaller left-wing parties, disregarding the million people who had voted for them and saying it was his duty to ensure that the “wrong signals” were not sent to international financial institutions. According to Ferreira, this “anti-left crusade” threatened to both derail Portuguese democracy and polarise the country even more.

The president also criticised the smaller left-wing parties for questioning the EU’s fiscal policies and opposing Portugal’s membership of NATO, saying a government containing such ideas could not guarantee the country “stability, durability and credibility”.

The big problem, says Patricia Kowsmann at The Wall Street Journal, is that Coelho himself has “made it easier for companies to fire and hire workers” whilst raising taxes, cutting spending on the public sector, and failing to tackle unemployment. In doing so, the prime minister has shattered his own credibility in the eyes of many Portuguese citizens, the majority of whom voted against his government in this month’s elections.

In fact, even right-wing politician José Pacheco Pereira has asserted that Cavaco’s decision will do more harm than good. Essentially, he says, the president has “declared war” on almost three million citizens by choosing to appoint a minority government – a decision he says is “on the edge of legality”. It is particularly worrying, he suggests, that:

a significant section of Portuguese [citizens] cannot access political power… [because their] parties don’t have the same rights as others.

Could Corbyn face the same fate as the Portuguese left?

Both Harold Wilson and John Major led minority governments for very short periods in 1974 and 1996-97 respectively, but this system is very uncommon in the UK. Therefore, it would require a controversial decision from the Queen to give us such a government again. However, if the anti-Corbyn scaremongering continues (which it seems likely to), Britain’s head of state may well find herself with the choice to side with the country’s economic and political elites or to side with the people (which would be a strange choice for an unelected monarch).

Unity on the British left was necessary before the 2015 election, but Labour’s continued commitment to ‘austerity lite’ policies made that very difficult. Corbyn’s leadership, however, seems to be backed by a significant grassroots mobilisation against austerity. So there could well be hope for a united left-wing campaign in 2020. And such an electoral alliance will be the best chance progressives in Britain have to avoid the apparent fate of the Portuguese left while kicking the Conservatives and their corrupt economic doctrine out of power once and for all.