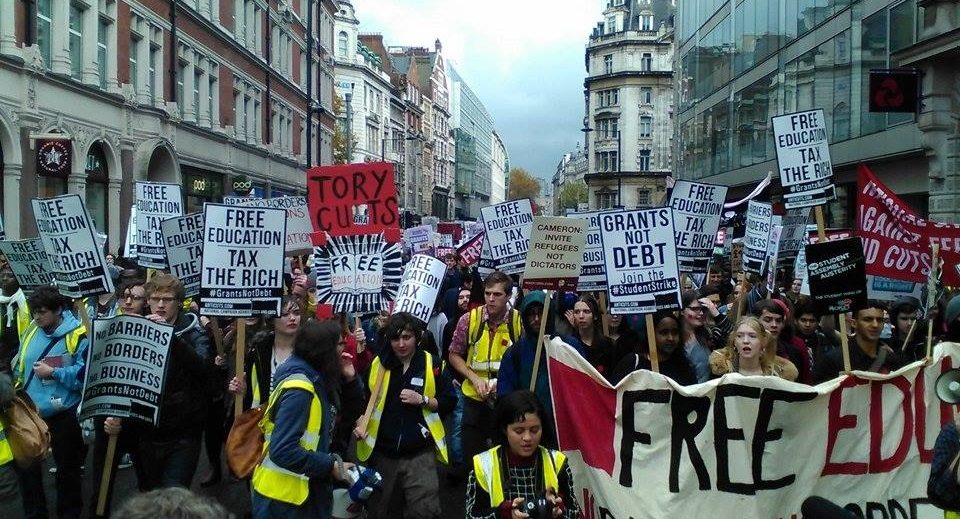 On Wednesday, students put foot to tarmac once more in protest against cuts that will make going to university much more difficult for the most underprivileged young people.

The ‘vibrant, loud and colourful’ march made its way peacefully to Parliament Square and then to the Department of Business, Innovation & Skills where a confrontation between police and masked activists took place. The heavy-handed police response after this point was called ‘excessive’, and ‘disgusting’ by members of the public who witnessed it.

The shredding of maintenance grants for poor students, announced in Osborne’s eye-widening summer budget, was a major cause of the rally, which may have attracted as many as 10,000 supporters. They want a return to the grant-based free education that their parents, and many of those now in power, once enjoyed.

Labour leader Jeremy Corbyn released a statement ahead of the rally in which he gave support and encouragement to the students:

There are no student fees in Scotland, Germany and twelve other European countries. I want to bring all UK students into line with that sensible approach. We all benefit from education, collectively as a society, not just as individuals. Keep protesting, keep campaigning for justice. Education is a right, not a privilege.

This was read out in full at the start of the rally in Bloomsbury Square. Shadow chancellor, John McDonnell, also made a speech in which he said:

This government is betraying you and future generations and I’m here in solidarity for education. Let me say this: your voice needs to be heard. This will be a peaceful demonstration, and safe, but make sure the Tories know that we are not going to stand for this any more.

It has been widely reported that 12 demonstrators were arrested on the day, while most activist sources quote 18, and this tweet from the organisers suggests 16:

(1/2) 11 people released with 2 more to come out shortly and 3 more to be released later – none charged for now, but all bailed to the..

Later the National Campaign Against Fees and Cuts (NCAFC) issued a statement condemning the police violence and said:

We will build a movement that can win – and we will not be deterred, either by the violence of the police, or the myth that protest doesn’t work. Because from history and from student movements all over the world, we know that it does.

Almost 5 years ago to the day, thousands of student protestors invaded and vandalised the Conservative party HQ in Millbank. This was a show of anger over the tripling of tuition fees by the Tory/LibDem Coalition, despite ardent promises from LibDem leader Nick Clegg that they would not go up.

Ed Miliband refused to support students or promise a return to free education, further alienating them. 2011 became a year of constant protest, rioting, and direct action and since then the level of unrest has fallen and risen, with a new generation of student activists standing in solidarity with those who have come before them and will come after them.

The proximate causes of each wave of student protest bleed into one another. In 2010 it was student fees going up along with the scrapping of EMA for A level students. In 2013, the protests were around the marketisation of higher education and a range of illiberal crackdowns from the university managements.

This year, the students are not only protesting about the scrapping of maintenance grants and the unfair treatment of international students, but they’ve also got all the built-up outrage of this recent history of cuts and crackdowns. Then there’s the overall bleak outlook of debt, lack of graduate jobs, unaffordable housing, and an economic and political system which seems to have shut them out.

Each year a new set of eager students turns up for freshers’ week, and each year a new insult is delivered from the government.  The old resentments and injustices do not fade, and the problems remain unsolved  – poisoning the lives of a generation.

Read more about this subject in Jackie Cannon’s analysis of education department spin in relation to the student protests.