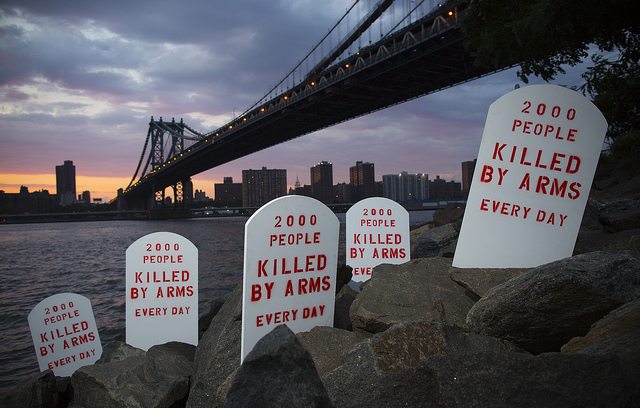 There are no excuses for appalling indiscriminate attacks on civilians’ lives, and we must condemn these atrocities wherever and whenever they occur.

However, whilst the rhetoric turns to intelligence gathering failures, repressive legislation, and racism, it is vital we move the debate to include condemnation of those who make money out of conflict and terrorism. One important beneficiary is the arms trade.

In the days following 9/11, the stock market crashed, and share prices fell as the New York Stock Exchange remained closed until 17 September. However, in the aftermath, shares in arms companies rose, with companies like British Aerospace Systems (BAE) seeing a marked increase in share value.

BAE are unashamedly blatant about exploiting the situation in the Middle East, with an annual report last year stating:

For decades, Western arms companies have been fueling wars. US and UK companies armed Saddam Hussein, even after he gassed and killed 5,000 people in the Kurdish town of Halabja. According to a report in the Independent, in 2013, the UK made £12 billion from arms sales to repressive regimes. The majority of these were in the Middle East and Africa.

These figures led Jeremy Corbyn to call the arms trade a “contributory factor” to the rise of Isis. Speaking on Question Time earlier in the year, he said:

It’s not just the US and the UK. Whilst the US, Russia and China have the highest level of arms exports, other European countries in the top ten include France, Italy and Germany.

France, in fact, has a burgeoning arms trade. Figures released in April show France had already made €15 billion (£10.6 billion) in the year to date, including selling 24 fighter jets to Quatar in a €6.5 billion (£4.6 billion) contract. Even seven months ago, France had surpassed their previous year’s arms sales of €8.06 billion (£5.7 billion). And, President Hollande has been courting Saudi Arabia’s repressive and human rights abusing regime, hoping to build on the contract, secured in November 2014, for €2.7 billion (£1.91 billion).

Andrew Smith, from Campaign Against Arms Trade, stated in a press release about UK arms sales to Saudi Arabia, but which could equally apply to any government:

The Saudi authorities are lashing and executing opponents, locking up bloggers, and bombing civilians in Yemen. Their human rights situation is dire and the UK government has repeatedly failed to say or do anything about it.

There must be an immediate embargo on all arms sales to the regime, and an end to the uncritical support they are given. How many people have to be tortured and killed before the UK government finally says enough is enough?

We should all mourn the dead, whether they be in Paris, Beirut, or Ankara. However, if we have even the slightest chance of ending this cycle of violence, we have to look at the companies profiting from conflict, and we have to take action against them.

In the words of the anti arms campaign group, Smash Edo:

Every bomb that is dropped, every bullet that is fired, has to be made somewhere. And wherever that is, it can be resisted.

If we want to act in solidarity with those killed and injured in these attacks, it is vital we look beyond platitudes and turn this grief into positive action.  Arms companies should not be allowed to capitalise on instability and suffering, and should not be arming repressive regimes. It is time to say ‘no more’ to the big multinationals making billions out of war and death, and to all of our governments that support them.