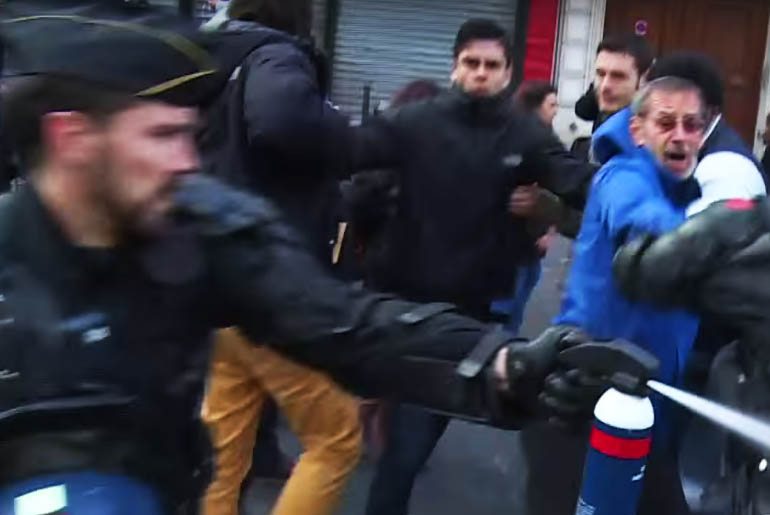 On Sunday, the Migrants Bienvenue (Migrants Welcome) demonstration defied the protest ban in Paris, marching past icons of the French Revolution to show solidarity with refugees. Despite threats from the authorities that they could receive prison sentences of up to six months, the turnout was substantial – with between 500 and 2,000 people hitting the streets. After attempting to intimidate and dissuade the protesters from continuing, the French police attacked them with batons, pepper spray, and teargas, leaving several protesters with minor injuries.

Undeterred by the violence, the protesters marched from the Place de Bastille, the iconic square where crowds stormed the prison fortress in the revolution of 1789, to the Place de Republique, named after the new form of government that replaced the former tyranny. While the police formed lines to prevent them entering the square, the crowds eventually broke through.

The choice of the start and end points for the march were not accidental; these icons say “this is Paris, the birthplace of modern democracy and everything that it entails.”

Annie Pourre, of French activist group Droit Au Logement (Right to Housing), called it a “demonstration for the right to demonstrate”. But according to other French sources, the march was planned months ago after a joint statement from various activist groups was signed, declaring their support and solidarity for refugees arriving from Syria and around the world.

When the state of emergency banning gatherings and demonstrations was declared, some groups pulled out of the event. But many people may have attended precisely to show that they will not allow the democratic process to be shut down at the dictate of the government.

If the first chants focused on the reception of refugees, very quickly, due to the confrontation with the police, and aided by the vapors of tear gas, the watchwords hardened. “Solidarity with the refugees” turned into a “state of emergency, police state! It will not remove our right to demonstrate. “

A flyer for the march posted on twitter reads ‘Migrants Welcome’: 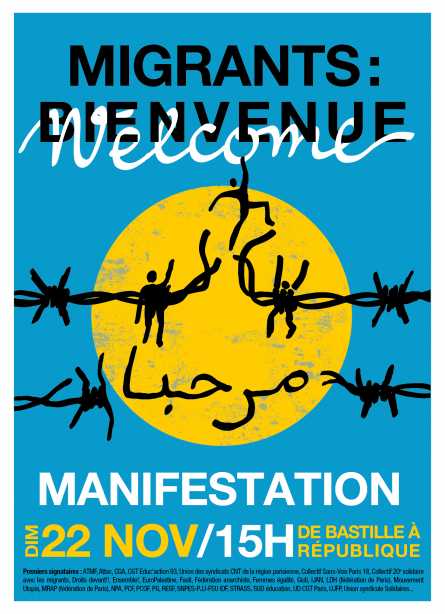 The state of emergency declared in Pairs after the 13 November attacks gives the government carte blanche to shut down websites, make searches, and place suspects under house arrest without warrant. Some of this is justified, some of it is not.

The bans on public gatherings and protests are meant to keep Parisians safe and prevent further attacks from Daesh (Isis), but the only people who were hurt in Sunday’s protest were victims of police batons and teargas. While the desire to put security measures in place is understandable, human rights groups are concerned that the attacks are being used to justify abuses of state power and that the 3-month ‘state of emergency’ will be extended. And with large protests due to go ahead as planned in the wake of the COP21 climate summit next week, it looks like defiance of the ban will continue.

Our civil liberties are being eroded. State surveillance is increasing. We’ve witnessed Muslims detained in Guantánamo Bay with no charges against them. Torture and undercover policing have become the new norm. But we appear to be no safer. Where then is the justification for putting democracy on hold while the threat ‘blows over’? It won’t. It hasn’t. And it simply cannot until western governments substantially change their attitudes and policies regarding the Middle East.

This is precisely what protests like that of Migrants Bienvenue set out to achieve: a change of attitude, a change of policy, and an end to this amnesia and cycle of violence where we are repeatedly making the same mistakes with the same consequences.