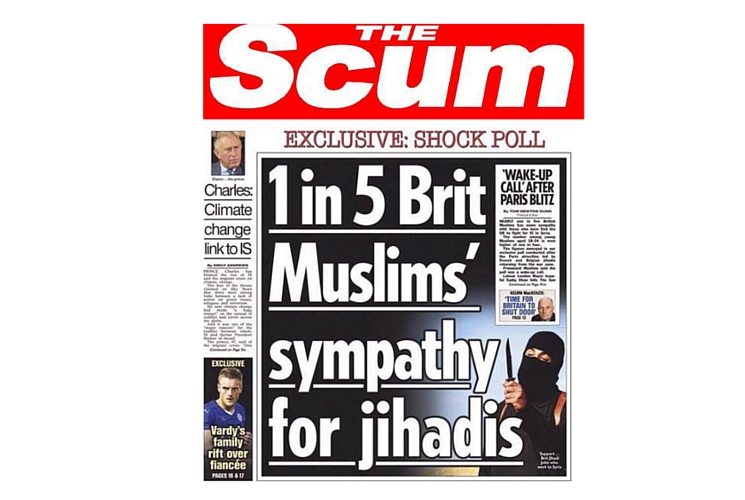 The outrageous front page in The Sun, which claimed that one in five British Muslims support jihadis in Syria, has attracted the highest number of complaints the Independent Press Standards Organisation (IPSO) has ever received. The paper has also been mocked on Twitter as people have seen through its malicious lies.

The Independent Press Standards Organisation (IPSO) was set up in September 2014 in order to “uphold the highest standards of journalism”. The Sun’s front page on Monday could not have been further from these standards. There was no mention of “jihadis” in the survey the headline was based on, the questions asked were ambiguous and there was an almost identical level of sympathy shown by non-Muslim people. This gutter journalism has led to 450 complaints being sent to the IPSO, the largest in its short history.

The Independent, The Guardian, BuzzFeed and The Mirror have all debunked The Sun’s immensely misleading article by highlighting the ambiguous nature of the survey. Meanwhile, the satirical website The Daily Mash ridiculed certain tabloids by saying:

People on Twitter have also been quick to mock the bigoted paper using the #1in5Muslims hashtag:

#1in5muslims think Ross and Rachel were on a break

The Sun’s front page, published at a time when attacks on Muslim people are massively increasing, was dangerous and divisive. But just as people have been standing up to bigots on public transport and showing solidarity with Muslims, they have also been deriding and mocking The Sun for its ludicrous claims – in the greatest way possible.

A petition has also been launched calling on the Attorney General to charge the paper with incitement to racial hatred.

If you wish to make a complaint to the IPSO, please follow this link.