Osborne just bought a big gift for his friends, and handed the bill to the taxpayer - Canary 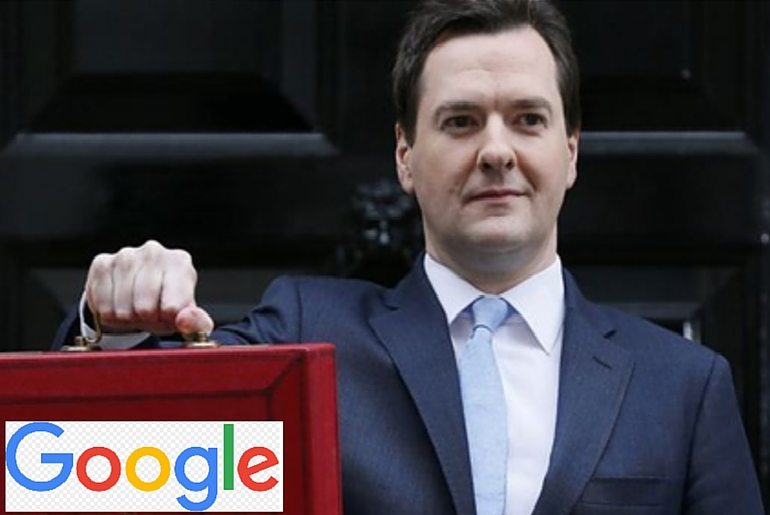 Google has a financial structure which means that its cash generated in the UK is directed into accounts in Ireland and Amsterdam and then into a tax haven in Bermuda.

It is estimated that Google has avoided around £1.6bn over 10 years, even though it has generated 10% of its revenues in the UK. Osborne has got Google to pay back £130m, but this means that the search engine has paid only £200m in tax since 2005, despite its UK profits being more than £7bn. This is the equivalent of paying less than 3% corporation tax, despite the corporation tax rate being 20%.

But Osborne asserted that it was a “really positive step”:

While Osborne proudly trumpeted getting a company to do a small amount of what it should be doing all the time anyway, tax expert, Richard Murphy expressed outrage at the deal, which allows Google to get away with paying only a small fraction of the tax due:

I can’t understand why the deal with Google is so cheap. I’m worried if they are going to repeat that with other companies. What was agreed is far removed from what is required for sustainable corporation tax in future. They are undermining the new international tax consensus which David Cameron and George Osborne have worked for, supposedly.

Though Brittin seems to miss the point that Google is not paying the corporation tax it should be paying.

The Labour shadow chancellor, John McDonnell, said that it was “unacceptable when most people in this country pay much more”.

It appears the government’s view is that something is better than nothing, but it sets a dangerous precedent for other corporations to request equally favourable deals. This could lead to rich corporations having a smaller tax rate- as low as 3%- while small businesses have to pay a much higher rate of 20%. This, as Osborne has said, is “a real vindication of this government’s approach”… to inequality. Google paying its 20% share of tax could transform the lives of those that have been hit by austerity measures:

– Welfare cuts have been linked to people to killing themselves

– Pensioners are being charged for falling over

– Students are facing cuts to grants, meaning they cannot afford housing and many are suffering mental health issues due to financial stress

Despite the fact ordinary people are struggling, large corporations operating within the UK are allowed to contribute as little as possible to the treasury. The fact the government sees this as a “victory” really shows where their loyalty lies.

Support the Canary so we can keep exposing this government.

Write to your MP to let them know how you feel about the government’s over-friendly relationship with big business.

Support UK Uncut or get involved with other organisations campaigning against our current system of socialism for the rich and capitalism for the poor.