HSBC to stay in London, after Osborne bows to all their demands - The Canary 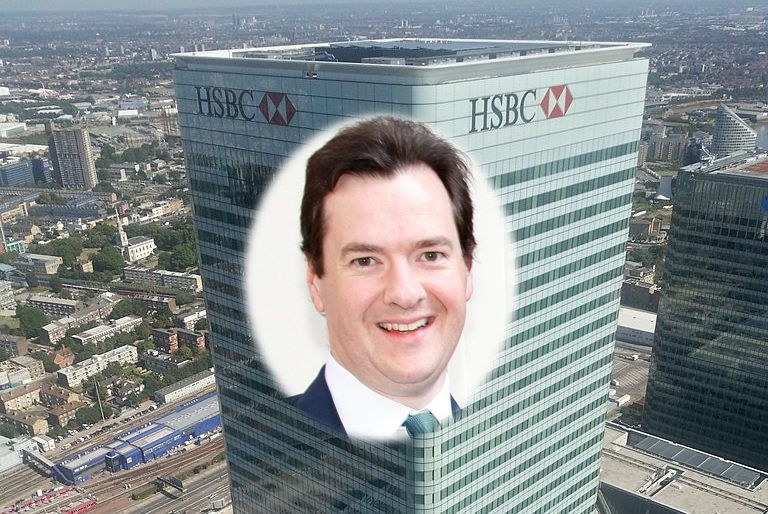 On Sunday 14 February, banking giant HSBC announced that its headquarters would remain in London, after previously considering a move elsewhere. But this was not an independent decision. It was influenced heavily by Chancellor George Osborne’s increased pandering to the financial sector.

The positive aspect of HSBC’s decision is that, for now, around 1,000 jobs at the bank’s HQ are safe. But the negative aspect is that this announcement comes as a result of Osborne’s intensified efforts to deregulate the banking sector.

HSBC claimed that stricter regulations, like the Bank Levy introduced in 2010 to tax banks’ global earnings, had pushed it to consider changing the location of its headquarters. But Osborne didn’t placate HSBC immediately, perhaps feeling he couldn’t act until after the 2015 elections because of the immense public anger over the most recent economic crisis caused by the financial sector. Two months after the Conservative win in 2015, however, Osborne quickly changed the Levy, applying it only to banks’ UK operations.

Some quick facts about HSBC

HSBC is one of the largest financial institutions in the world. It has long helped the world’s economic elites to avoid and evade tax – as data obtained by a former HSBC IT expert began to reveal from 2008 onwards. In 2015, it admitted these “failings” publicly.

At the same time, the bank has been involved in scamming British citizens out of around £1bn.

The bank also has a “track record of money laundering on behalf of illegal entities”, according to Elizabeth Matsangou at World Finance. In fact, one drug lord once called it “the place to launder money”. And this reality came under scrutiny in 2012, when the institution paid $1.9bn to settle a criminal investigation into claims it had laundered around $881m on behalf of Mexican drug cartels.

In February 2016, yet another lawsuit was launched into these activities.

Osborne in the pockets of the financial sector

HSBC’s history of money laundering, tax avoidance and tax evasion does not necessarily mean that Osborne sympathises with such activities himself. But what is clear is that he has used the bank’s threat of moving its HQ abroad as an opportunity to relax banking regulation.

The Institute for Fiscal Studies insists that Osborne’s reductions to the Bank Levy are a “significant giveaway” (pdf) to HSBC. But the Treasury claims the bank’s decision to stay in London was a “vote of confidence” in its plans. And indeed, how could a bank not be confident when its profits are guaranteed and topped up by a government bending over backwards to keep it happy?

After a 10-month review considering moving abroad, HSBC Chairman Douglas Flint insisted that Osborne and co had given the bank “very firm commitments”. During this period, the Chancellor called for a “new settlement” to end the previous years of “banker bashing”. Essentially, he hoped British citizens had forgotten about how they had bailed out banks to the tune of tens of billions of pounds just a few years earlier, whilst suffering the consequences of Britain’s deepest recession since World War II.

Apart from diluting the Bank Levy, Osborne’s plans included limiting the large fines that could be handed out to financial institutions and reducing regulatory oversight. He has achieved this in part by ousting the head of the Financial Conduct Authority, Martin Wheatley, whose time in charge saw some of the largest banking fines ever. The Chancellor has also revealed plans to sell government stakes in the Royal Bank of Scotland Group Plc.

HSBC says it hasn’t forced Osborne to do all of this, with Douglas Flint insisting “no pressure” was put on the government during the bank’s process of reflection.

But that may actually be even worse. The Chancellor has effectively decided, of his own free will, to give the financial sector more of a free ride. And he seems not to care at all about the damage that the current system has done to British citizens.

the chancellor is happy to take his orders from the banks. But we simply can’t afford this light touch approach to the financial sector at such a sensitive time in the global economy, as it could be seen as a green light for a return to 2008.

Echoing McDonnell’s words, one Twitter user theorised about the real reason for HSBC’s decision to stay in London:

Spokesperson says 'We'd miss popping in to see our friends in Westminster too much.' pic.twitter.com/lopDieCc1E

Osborne is in cahoots with the financial sector. That’s where his real interests lie. And that’s just one more reason why the current Conservative government is a danger to ordinary British citizens.

Visit Move Your Money and show unethical banks like HSBC that they don’t deserve your business.

Featured image via Danesman1 and DFID