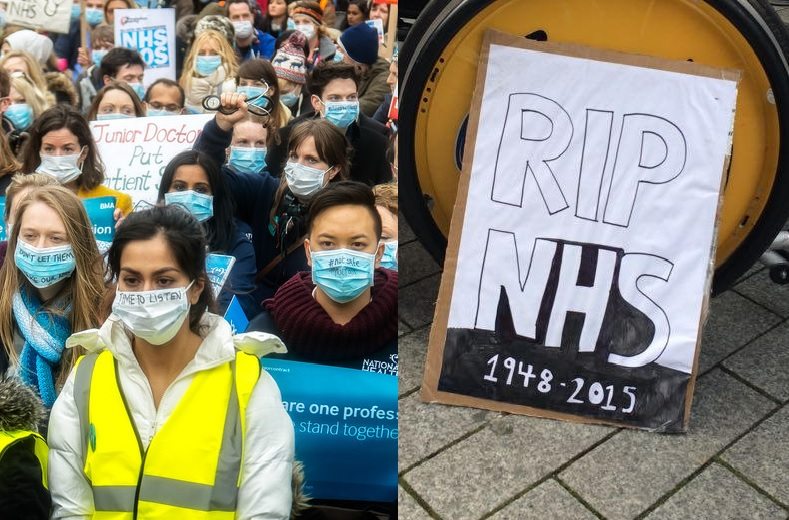 The imposition of new junior doctors’ contracts is being callously exploited by the Conservative government to make further cuts to the NHS.

There is, of course, the potential reduction in spending on junior doctors wages. This may be achieved through the contracts’ extension of ‘normal’ hours, to 9 pm weekdays, and the inclusion of Saturdays. Consequently, less money will be spent on overtime rates for these previously unsociable hours.

But the UK government has now determined another way of using the contracts to defund the treasured NHS – by cutting funding to hospitals refusing to impose these contracts on junior doctors.

Following Jeremy Hunt’s controversial decision to force the widely condemned contracts on junior doctors from 1 August, it has become apparent that he actually has no power to do so. As Caroline Walker, deputy chief executive of the Peterborough and Stamford Hospitals NHS Foundation Trust, explains:

So, despite Hunt’s bluster, the 152 foundation trust hospitals in England, who would implement the contracts, are not legally bound to do so. And some trusts are weighing up their options.

This whiff of autonomy has not sat well with the Tories, despite their decentralisation mantra. Health Education England (HEE), the Department of Health body that coordinates education and training, has sent a warning letter to all NHS trusts, stating:

We are not prepared to see a system where a competition based on a local employer’s ability to offer different terms is part of the recruitment process…Therefore implementation of the national contract will be a key criterion for HEE in making its decisions on our investment in training posts.

The Department of Health is essentially threatening to withhold training budgets for medics from any NHS trust that refuses to impose the contract. Seemingly, the government doesn’t believe in competition when it comes to recruitment, even though the health service itself has been completely opened up to competition under the Conservatives.

HEE controls around half the training budget for junior doctors, so cuts in this funding would severely reduce the amount of junior doctors able to train in these NHS trusts.

Alternatively, those trusts which bow to the government’s demand, are also likely to see a massive reduction in junior doctors opting to train. On the day Hunt announced the imposition of the contract, applications by medics for work overseas increased by over 1,000 per cent.

The NHS is trapped in a catch-22 and, as one junior doctor points out, it’s only going to get worse:

After the junior doctors the same terms will go to the consultants, the GPs, the nurses and the other health professionals.

The contract terms now being imposed on junior doctors, if allowed, could be rolled out across the entire NHS service. And this doctor is clear about the purpose of these changes:

This is the real reason the government want this contract to happen – it will make the system much more attractive to private companies.

If staffing costs are lowered, private companies are more likely to bid for contracts within the health service. Since the implementation of the Health and Social Care Act, which came into force in April 2013, more than a third of healthcare contracts are already going to private firms. This graphic, from the NHS Support Federation, shows the rapid increase of private interests in our public health service over the last couple of years: 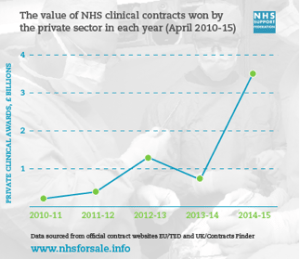 This is no accident, it’s Tory policy. The Health and Social Care Act has purposefully marketised healthcare, and every choice the UK government make in this area drives a profit motive nail further into the coffin of our beloved NHS. That’s why David Cameron refuses to support the exemption of the NHS from the Transatlantic Trade and Investment Partnership (TTIP), currently being negotiated with the US. Only an exemption would protect the NHS from US companies forcing the UK government to slice up the service, and handing it to them.

Obviously, Cameron doesn’t believe healthcare is a right, he believes it’s another vehicle for profit. His actions prove that. This is also true of Jeremy Hunt, who even helped write a book on the benefits of a privatised health service. They are systematically chipping away at every element of the NHS, to ensure that it becomes unworkable.

The junior doctors know that and are fighting to save it. We all should join them – before it’s too late.