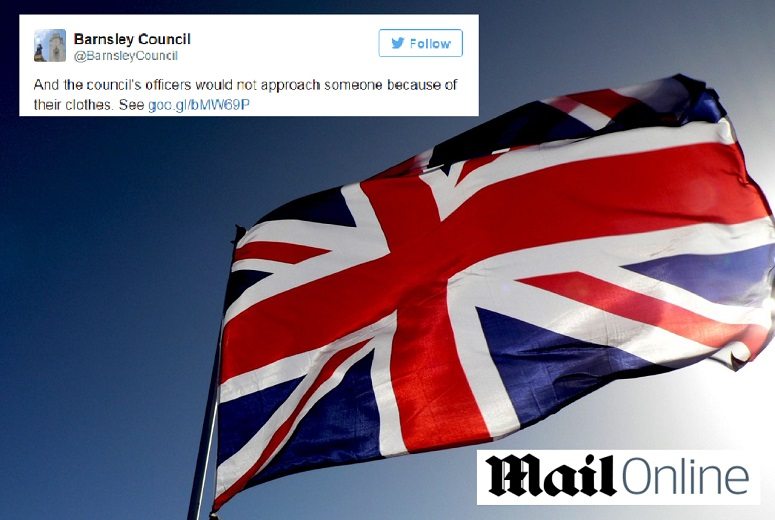 A controversial Daily Mail story about a pub landlord who was told to remove his Union Jack jacket because it might ‘offend somebody’ has been debunked.

Last week, pub landlord Jason Mawer told The Daily Mail he was asked twice to remove his cherished Union Jack jacket by ‘officials who appeared to be council enforcement officers’.

The unnamed female official, supposedly from Barnsley Council, allegedly warned him: ‘Would you mind removing your coat it might offend somebody?’

The quote was not attributed to a council employee and, according to Jason, the anonymous female official’s only defining feature was her ‘high visibility’ jacket.

He says the mysterious woman stopped him in the street before requesting that he remove the Mod-style Barbour jacket – designed in homage to British rock band The Who.

A different officer, of which there’s no description, allegedly collared him again on Saturday afternoon with a similar request, he says.

To be honest I was in a hurry and I was walking along as she asked me to take it off. In the end I just said, “No I’m not taking it off,” and carried on.

I thought it was ridiculous to be honest. What’s offensive about the Union Jack? I only had a T-shirt on underneath and it was raining so I would have got really wet.

It was an insult to be asked to take it off. It is my pride and joy. I’m a big fan of The Who and the Mod era and have all the gear.

The questionable story, first published by the Mail Online, went viral; subsequently appearing in The Sun, The Mirror and The Huffington Post.

It seemed political correctness had genuinely gone mad this time, and the tabloid press and mainstream media were only too happy to open a can of nationalistic worms. They had a field day.

However, Barnsley Council was quick to refute the landlord’s claims, taking to Twitter to announce that no such incident had been recorded by any of the council’s enforcement teams.

In a follow-up tweet, they said: “the council’s officers would not approach someone because of their clothes.”

No such incident has been recorded by any of the council's enforcement teams. See https://t.co/vhOK2izlPl

And the council's officers would not approach someone because of their clothes. See https://t.co/vhOK2izlPl

Nice try, Daily Mail, but pull the other one next time – it’s got bells on.

Become a member of Hacked Off, a campaign for a free and accountable press

Watch this documentary on corruption and political economy in the media The Fourth Estate.