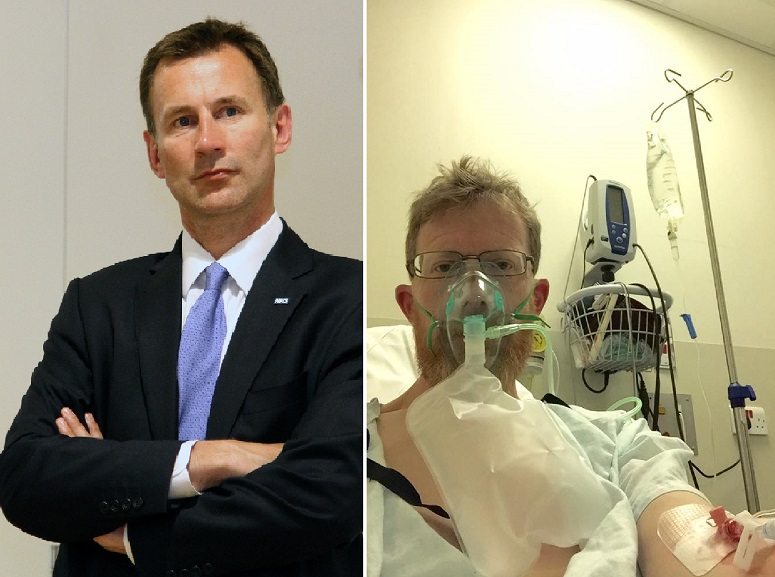 A man has taken to Facebook to attack ‘utter bulls***’ claims that the NHS is only a ‘five day a week’ service after having his appendix removed – at the weekend.

Richard Grayshon spoke of the “completely dedicated, professional and friendly way” NHS weekend staff worked to treat him after he was struck with appendicitis on a Saturday night.

Under fire Health Secretary Jeremy Hunt said that in only 10% of hospitals are patients seen by a senior doctor within 14 hours at weekends, bolstering his case for introducing a seven-day NHS.

But Richard Grayshon blasted the claims, praising the NHS weekend staff who diagnosed, treated and removed his appendix in a life-saving operation within 15 hours.

Richard admitted himself to Calderdale Royal Infirmary’s A&E in Halifax after he was struck with bad pains across the middle and bottom of his stomach.

He says he was reluctant to “waste the NHS’s time”, but contacted the 111 helpline service to discuss his symptoms with an adviser who suggested he visit A&E for further tests.

Upon arrival, he says the staff were “working in a completely dedicated, professional and friendly way” while they gave him blood tests, x-rays, antibiotics and fixed him up to a drip.

He was then taken to Huddersfield Royal Hospital to have his appendix removed, where he received “the same incredible level of care” – despite the uncertainly over the future of the hospital.

In January, a report revealed the West Yorkshire hospital could be demolished in a move to save the NHS £31m.

Richard posted a selfie wearing an oxygen mask in hospital on Facebook and wrote:

I’m sensing that the ‘five day a week’ thing may be complete and utter bullshit perpetuated by a government that is determined to fundamentally and fatally damage the NHS and replace it with a private cash cow (that they’re milking the udders of!)

The picture is of me getting oxygen via a mask, with a cannula in my arm and well on the way to being made better. The whole treatment – from admission last night to completion of the operation – was a bit less than 15 hours and was FREE OF CHARGE (of course, I’m aware that’s what our taxes contribute toward).

If you’ve read this far, you’ll be able to tell that I’m a huge fan of the NHS. If you aren’t, then you bloody well should be. There is nothing that comes even close.

THINK: if your life was on the line, who would you trust to save it – a Junior Doctor or Jeremy Hunt??!!
The NHS is irreplaceable – once it’s gone, it’s gone and that would be a national shame for us all.

But from over-the-phone diagnosis to completion of the operation, Richard was on the road to recovery within 15 hours – thanks to the dedication of NHS’s weekend staff.

The inspiring post has been shared more than 29,000 times, with many Facebook users full of praise for the NHS and its weekend staff.

Well said!! – Britain’s NHS is an envy of the world. SUPPORT IT and prevent this great system turning into an American privatized system. It is not as good. Glad you are doing well!

Well said. The NHS is a fantastic service, run for peanuts compared even to public health care in the US (never mind private) because it treats according to need not wallet.

Sign the petition calling for a vote of no confidence in Health Secretary Jeremy Hunt to be debated in parliament.