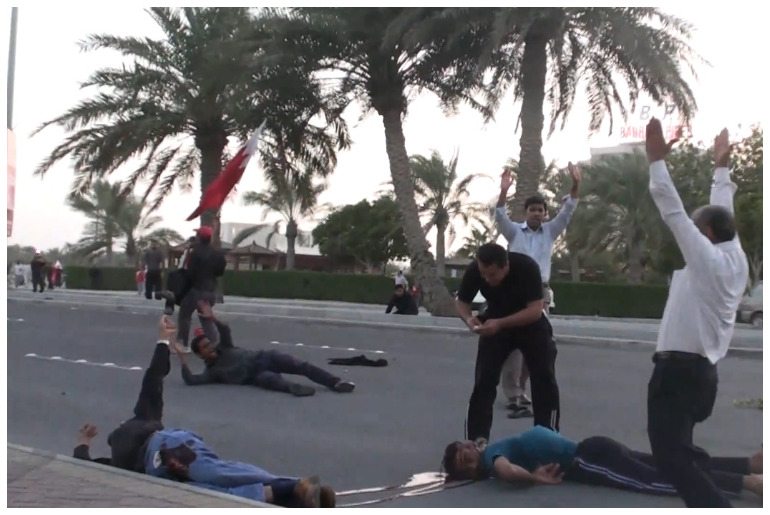 The UK successfully lobbied the UN Human Rights Council (UNHRC) to protect Bahrain from harsh international criticism over its human rights record. Bahrain has been censured for a heavy-handed response to protests since the Arab Spring of 2011. Britain, with the help of Saudi Arabia, managed to “significantly weaken” the contents of the report which was released last September.

The initial draft of the document “contained many more condemnatory elements than the final outcome,” diplomatic sources told the Observer. Whilst an early draft read:

(W)e are concerned by reports of excessive use of force by the riot police forces,

British and Saudi public relations efforts had this changed to:

(W)e are concerned that there is insufficient accountability for human rights violations.

In a later draft;

We are concerned about reports of torture and ill-treatment in detention including reprisals against victims reporting human rights abuses,

was rewritten to read;

We are concerned about reports of reprisals against victims reporting human rights abuses.

(You can read the final release here [PDF])

Bahraini authorities have engaged in a widespread crackdown on activists, demonstrators and political opposition since 2011. When the Arab Spring spread to Bahrain, their Saudi neighbours were quick to offer their services in repression. As a convoy of Saudi military vehicles crossed the bridge into Bahrain, the chances of successful protests dwindled. Since the Saudi’s were quick to mobilise their military to assist an ally and neighbour, we should not be too surprised that they were also willing to mobilise their public relations department.

According to Nicolas Agostini, a representative of the UN at the International Federation for Human Rights,

At the same time as the UK was engaging in this PR exercise on behalf of the Bahraini government, Saudi Arabia was mobilising its foreign service to bully states so that they would not support the statement on Bahrain, which is very sensitive to international pressure and cares about its image

Saudi Arabia, who sit on the UNHHRC themselves as a result of a secret deal with British representatives, did not sign the final declaration. As a result of Saudi efforts, no other Middle Eastern states were signatories.

Since initial Saudi assistance repressed the protests, Bahraini authorities have been condemned by many human rights organisations – including Human Rights Watch (HRW). Reports suggest a climate of political oppression. Peaceful dissenters and demonstrators are detained and convicted. Accusations of torture and mistreatment are widespread. Security forces regularly use disproportionate force against protesters, whilst activists and political opposition face arrest – some even have their citizenship stripped.

Freedom of speech is also seriously restricted on the island Kingdom. These restrictions are not just reserved for Bahraini nationals. Four US journalists were arrested, charged and flown out of the country after attempting to cover the anniversary of the 2011 uprising. In the wake of the uprising and repression which followed, the British government has allowed £45 million of arms sales to Bahrain.

While the British government continues to lobby on behalf of, and arm, nations whose human rights records leave much to be desired, others are trying to raise awareness of these human rights violations. Labour MEP Julie Ward, for example, has been working with various NGOs to bring the persecution of Bahraini activists and opposition movements, to the attention of the EU. This work resulted in the adoption of an EU resolution calling on Bahrain to release one young activist, Mohammed Ramadan, earlier this month. Ramadan has been the victim of torture at the hands of security forces and is sentenced to death.

In addition to this effort, a group of 28 human rights advocates, including Amnesty and Human Rights Watch, sent an open letter to the King of Bahrain in January. The letter raised the case of Nabeel Rajab who, amongst other positions, is President of the Bahrain Centre for Human Rights. Although Rajab, accused of ‘publicly insulting official institutions’ in July 2015, was released from detention, a travel ban was imposed upon him on the day of his pardon. The ban restricts his ability to help his wife, who requires treatment unavailable in Bahrain. The actions against Nabeel Rajab are a result of social media posts criticising Saudi airstrikes on Yemen – another area in which Britain is involved.

In the case of Rajab, both the UK and EU Parliaments have called on Bahraini authorities to drop charges against him and lift the travel ban. So, whilst parliament urges our ally to make improvements in human rights protections, government representatives actively work to undermine such efforts in the international sphere of the UN. Hypocrisy doesn’t begin to cover it.

Keep up with developments in Bahrain, here.