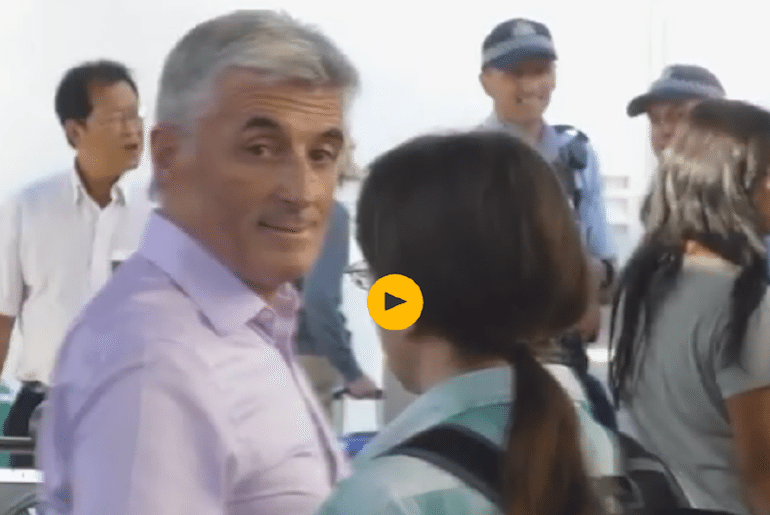 Legendary justice campaigner Helen Steel was one of the women deceived into a long-term relationship with a police officer when he infiltrated the activist group she belonged to. The Guardian reports that she flew halfway around the world to confront her former partner John Dines at Sydney’s Kingsford Smith airport on Sunday, having spent a quarter of a century piecing together his real identity.

In an interview with the newspaper 24 years to the day after Dines disappeared, Steel remarks that having relationships was incredibly difficult for her after the deception. Dines had told Steel that he wanted to spend the rest of his life with her, and they discussed having children. He posed as John Barker – an identity given to him by his superiors that in fact belonged to an eight-year-old leukaemia victim who had died in 1968.

The UK government went to incredible lengths to help Dines hide from Steel, eventually relocating him to Australia, where he has been a director of training courses for police officers for the last five years. Steel says she was “very concerned” to find out that the courses at the Charles Sturt police college where Dines works included ‘left-wing extremism’, and that he may, in fact, be training police officers in the tactics he used against Steel.

Steel was one of the activists in the McLibel case; a ten-year long court case, the longest in British history, which saw her and her activist partner-in-supposed-crime Dave Morris sued by McDonalds for libel, for distributing a home-made leaflet about the corporation’s many damaging business practices.

The two activists became relatively well known after appearing in Franny Armstrong’s documentary on the case, McLibel. The film depicts their journey throughout, showing how their lives were transformed when they had to work around the clock to mount a legal defence without professional help. Armstrong followed them through a partial success in the first case (in which they were ordered to pay McDonalds £40,000 in damages, though it was never collected), to winning a case at the European Court of Human Rights, in which it was ruled that the two had not received a fair trial and should have been allowed their freedom of expression in the first place.

The scope of the undercover police abuses of their activist victims is huge – some fathered children with their victims, several were married while carrying out these ultimately non-consensual relationships while undercover. In 2014, the Crown Prosecution Service (CPS) announced that they would not charge the officers in question, even though they had been considering charges of “rape, indecent assault, procuring a woman to have sexual intercourse by false pretences, misconduct in public office and breaches of the Official Secrets Act”.

Steel and other victims describe the decision as “institutional sexism” and a “cover-up”. After a four-year legal battle, eight women forced the police in November to apologise unreservedly for the “abusive and manipulative” relationships that caused them emotional and psychological trauma.

Since this particular corruption by the Metropolitan police has come to light, the tactics have been widely reported, discredited and considered human rights abuses. The Pitchford Inquiry into rights abuses by undercover police operations was spurred by victims like Steel. It currently has an open call for evidence. It remains to be seen as to whether the public inquiry will uncover the truth about these undercover police tactics once and for all, or if the police will continue to try and evade justice.

Write to your MP about the case.

Support the women’s Police Spies Out of Lives campaign and the Campaign Opposing Police Surveillance.

Support The Canary in continuing to report on injustices by those in power.