Cameron's boasts backfire at PMQs, as Corbyn busts the myth of his "strong economy" - The Canary 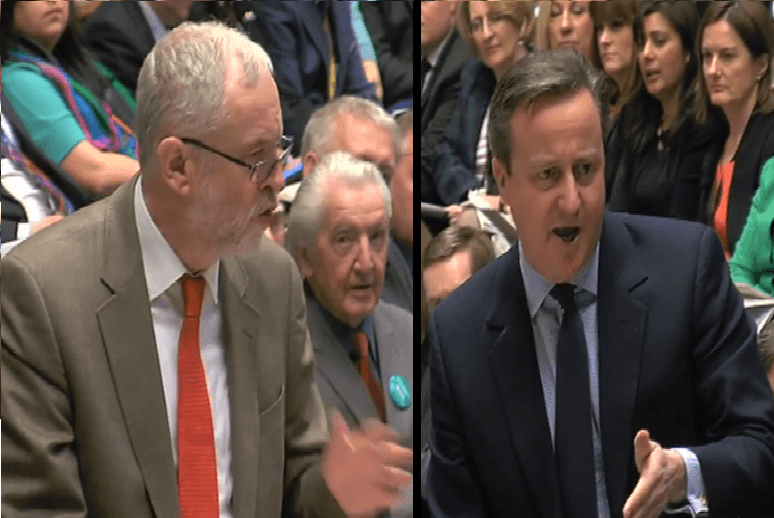 David Cameron’s weekly boasts about his “strong economy” took a worrying turn for the Prime Minister at Prime Minister’s Questions (PMQs) on 9 March. In his first question of the day, Corbyn quipped:

Last week the PM told the house that we have a strong economy with a sound plan. If the economy is so strong, then why this week has he forced through a £30 per week cut hitting some of the poorest disabled people in the country?

Here we see the crisis at the heart of Cameron’s rhetoric. At PMQs last week, Cameron responded to 4 out of the 6 questions Corbyn asked him with generalities about his “strong economy”.

Yet if our economy is really that strong, we wouldn’t have to cut Employment and Support Allowance (ESA) by £30 per week. These cuts will affect people who are too sick and disabled to work at present, through no fault of their own. A coalition of 60 charities – the Disability Benefits Consortium – condemned the cuts. They also surveyed disabled people and found that 69% believed the cuts would mean their health would suffer.

Cameron is stuck at a crossroads here. His argument must take one of two routes:

1) The economy isn’t actually very strong, and we therefore need to cut support for the most vulnerable people.

2) The economy is strong, and the cuts are just ideological.

This was the Prime Minister’s answer:

He asked about the strength of the economy. We do face an uncertain international environment. And all the experts are warning about the dangers we face. But as we speak today, we have inflation at 0%, we have unemployment at 5%, our economy is growing, wages are growing, and we’re cutting the taxes that people are paying. That combined with reforming welfare- and we are reforming welfare, is the way to get our deficit down, continue with growth and help deliver for working people in Britain.

Here Cameron tries to step both ways. He claims we still need cuts for deficit reduction but, after six years of cuts, the deficit has increased dramatically under Tory rule. In fact, the current Conservative regime has piled on more debt than every post-war Labour government combined.

Austerity clearly isn’t working. And with the Tories spending more on bureaucracy (carrying out Work Capability Assessments) than they are saving in welfare expenditure, one can see exactly how the debt is piling up.

The cuts, or “reforms”, must therefore be ideological. As they’re costing the taxpayer even more than they save, it makes absolutely no sense to carry them out to reduce the deficit.

Do we really have a strong economy?

Well the deficit has risen to over 80% of GDP. So on the Tories’ own terms, they’re failing on what constitutes a “strong economy”.

How about inflation? In his answer, Cameron pretends having inflation at 0% is a good thing, but really a healthy economy has an inflation level of 2%. This is to avoid ‘deflation’, which can be catastrophic for the economy.

How about wage rises? Well the Conservatives imposed a “miserly” 1% pay rise on public sector workers this week, while over the last year MPs have enjoyed a whopping 11.3% wage increase. And under the Tories, we’ve seen the biggest fall in living standards since the second world war. This means wages have dragged way behind inflation.

How about preventing another financial crash? Cameron tries to shift the blame to external “dangers we face”. But it’s the Tories who learned nothing from the 2008 crash. They just exploited the crisis for political capital by blaming the Labour government. Osborne attacked Labour on the BBC in 2012, saying Labour rule had seen:

a complete failure to regulate those banks that led to the crisis.

This is true. But this was all supported by the Conservative Party at the time, and exacerbated by them since.

There was endless anti-regulatory rhetoric from Osborne when Labour were in power, such as this:

I fear that much of this regulation has been burdensome, complex and makes cross-border market penetration more difficult.

The Conservatives now blame “an uncertain international environment” because they’re the ones in government. But the truth is that Osborne has simply failed to reign in the financial sector. In fact, it appears he isn’t even trying:

The Tories have maintained the same laissez-faire landscape that was the precursor to the 2008 financial crash. They have also failed to get down the deficit on their own terms. To top it off, wages have fallen way behind inflation, leading to a drastic fall in living standards.

These are bullet holes in Cameron’s “strong economy”.

But an economy in tatters is not a mandate for more austerity. Not when austerity has abjectly failed to get the nation’s finances in order for the past six years. We’re thus left with the conclusion that Cameron has not only overseen a terrible economic recovery, but that his austerity cuts are ideological and counterproductive.

You can watch PMQs in full here:

– If that’s not enough, you can pledge to take direct action.