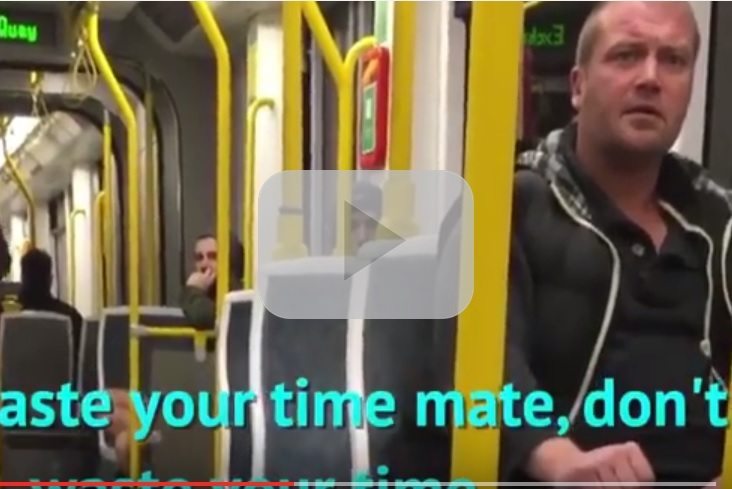 In early March 2016, video footage from a tram in Manchester showed a bigoted passenger being challenged for his abusive language.

The video was recorded by Manchester resident José, who moved from Peru to the UK three years ago to do a master’s at the University of Manchester.

According to José, there was a couple on the tram speaking Spanish, and an abusive passenger kept telling them to “speak English”. When they ignored his aggressive request, he said “go back to your own country”.

he thought I would be on his side because I am British. But I told him exactly what I thought… I would like to think anyone would have done the same… it’s a shame that we even have to deal with behaviour like that in this day and age.

The bigot answered Niall’s challenge by asking about his own ethnicity and sexual orientation. And just as Niall said he was gay and asked why that was relevant to the discussion, another man stepped in to back him up.

The new challenger told the racist he’d just call the police if the man continued behaving as he was. He insisted very simply:

This is the exchange that shut the bigot up for the rest of the journey:

You would only get a reaction like that in England.

In other words, while it’s great that people stand up against bigots, racism in the UK has not yet died the death it deserves.

But Niall has faith that, upon seeing interventions like the one he was involved in, the opposition to bigotry will continue to grow and the voices of racists will become silent. He insists: