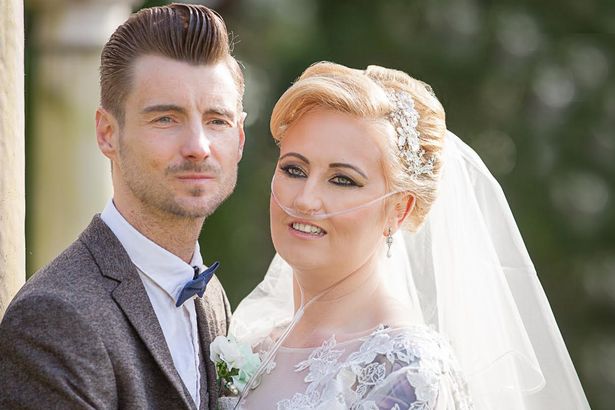 A newly-wed woman dying of a terminal illness returned home from honeymoon to a sickening ‘gift’ from the Conservative government. It was a letter informing her they are stripping her of the motability vehicle which she describes as her ‘legs.’

Marie Piles, who had fulfilled her “dying wish” by marrying partner Sean after friends rallied round to pay for their big day, told WalesOnline she fears being left housebound without the vehicle.

The 34-year-old said she was terrified of losing her independence after the Department for Work and Pensions (DWP) told her she was not entitled to her mobility car – despite having a terminal lung disease.

Despite being diagnosed with Pulmonary Fibrosis and Polymyositis which leave her dependent on oxygen tanks to breathe, and a mobility scooter to walk, Marie Piles has been declared too fit for the motability car. This effectively leaves her housebound, stripping away another part of her independence, just when she needed it the most. As her husband Sean says:

“I can’t quite get over what’s going on. What really angers me is the fact she has little independence left and what she’s got left they’re going to take away. She doesn’t like asking for help off me or anyone.

“They’re taken the independence she has left and ripping it away from her. She’s going to be housebound. It was a massive shock and it has sent her back to square one.”

What makes this situation worse, is that Marie Piles is not the exception, but the rule.

The Motability scheme was put in place to support around 650,000 sick and disabled people to live more independent lives. The government, through the Department of Work and Pension (DWP) provides an allowance which members of the scheme can use to lease a new car, scooter or powered wheelchair – together with additional funds to cover the cost of adaptations such as a hoist or hand controls.

However, as part of a raft of ongoing cuts to services which support sick and disabled people in Britain, the Conservative government has forced Motability users to reapply for the scheme under much harsher rules. More than 14,000 disabled people were stripped of their vehicles, 14,000 people like Marie Piles. It is likely that the end figure will be as high as 100,000.

The DWP grant which funds 59.6% of the Motability Scheme’s running costs amounts to just £19.5m a year, to serve well over half a million sick and disabled people. Meanwhile, parliamentary expenses cost over £100m a year, to serve just over 600 MPs. If there were cuts which needed to be made, perhaps there was a better place for the axe to fall?