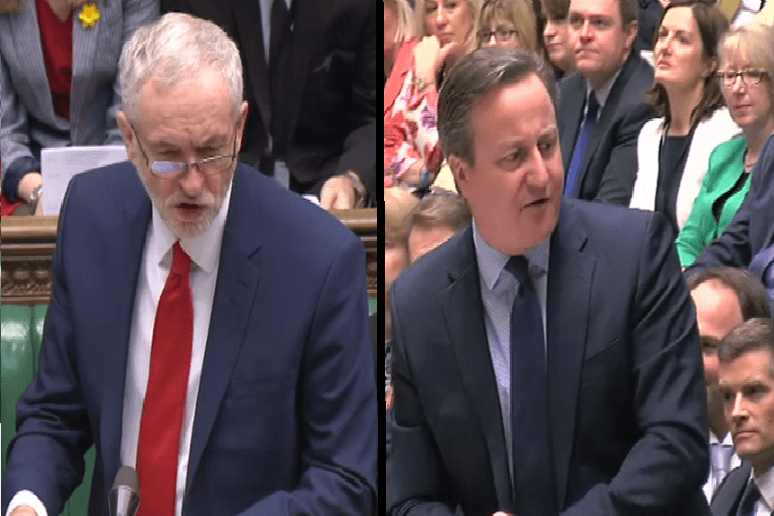 Jeremy Corbyn skewered David Cameron on the deaths that will be caused by Tory environmental policies at Prime Minister’s Questions (PMQs) on Wednesday.

For his first question, Corbyn asked:

Could the Prime Minister tell the house how many people will die from respiratory disease as a result of air pollution before this country meets its legal obligations on air quality by 2025?

David Cameron did not know the answer:

I don’t have the figures to hand. But what I do know is that we need to make progress on air quality. And that’s why we have the new regulations on diesel engines, which is helping. That is why we have the steady decarbonisation of our power sector, which will help. And that is why we do have very strong legislation already, in terms of making sure we do have clean air, particularly in our cities.

These piecemeal policies from Cameron sugarcoat a Conservative agenda that will drastically accelerate climate change and pollution levels. The Tories recently put our Green Investment Bank on the market and sold off our shares in Greencoat UK Wind, which were both designed to encourage investment in renewable energy. At the same time, they are scrapping support for onshore wind farms, axing solar subsidies, killing the flagship green homes scheme, abandoning zero carbon homes and fracking in our prized national nature sites.

Meanwhile, they are doling out tax breaks to the tune of £1.7bn by 2020 (according to government figures) for North Sea oil. This leaves the austerity argument for selling off our renewable energy assets and abandoning green policies in tatters.

Corbyn helped him out with the mortality figures caused by Tory facilitated air pollution:

The vast deaths from pollution happening now amount to an imperative that we act on emissions, even if you deny the 97% consensus from active scientists that impending, drastic climate change is a man-made reality. This line of attack from Corbyn surpass debating the level of calamity we’ll see in the future to focus on the living, breathing catastrophes of the present.

Despite this, the government has made it its legal duty to accelerate fossil fuel emissions, looking to “maximise economic recovery” through oil and gas. The Conservatives are putting blue rocket boosters behind climate change and are directly responsible for these increasing mortality rates.

On Wednesday, George Osborne delivered his budget speech, announcing a further volley of policies that will exacerbate climate change and pollution. He made oil and gas more profitable:

I am today cutting in half the Supplementary Charge on oil and gas from 20% to 10%.

And he abolished the Carbon Tax and Petroleum Revenue Tax:

Instead I have decided to abolish it (the Carbon Tax) altogether.

With many of the disastrous impacts of climate change yet to come, this opening line from Osborne amounts to a sick joke:

We will not burden our children and grandchildren. This is a Budget for the next generation.

With massive divestment in renewables only matched by tax breaks for fossil fuel companies, this Conservative government’s record on the environment is rock bottom. They are sailing their ship (which we happen to be on) past melting icecaps and rising sea levels, towards total environmental oblivion. At PMQs on Wednesday, Corbyn’s environmental questions grew teeth and sunk deep into the Tory leadership.

You can watch the full version of PMQs here:

-Write to your MP to express any malcontent.

-Support The Canary so we can continue to hold the powerful to account.