Tory ‘Remain’ camp hits a new low, the hypocrisy of these two MPs will leave you speechless - Canary 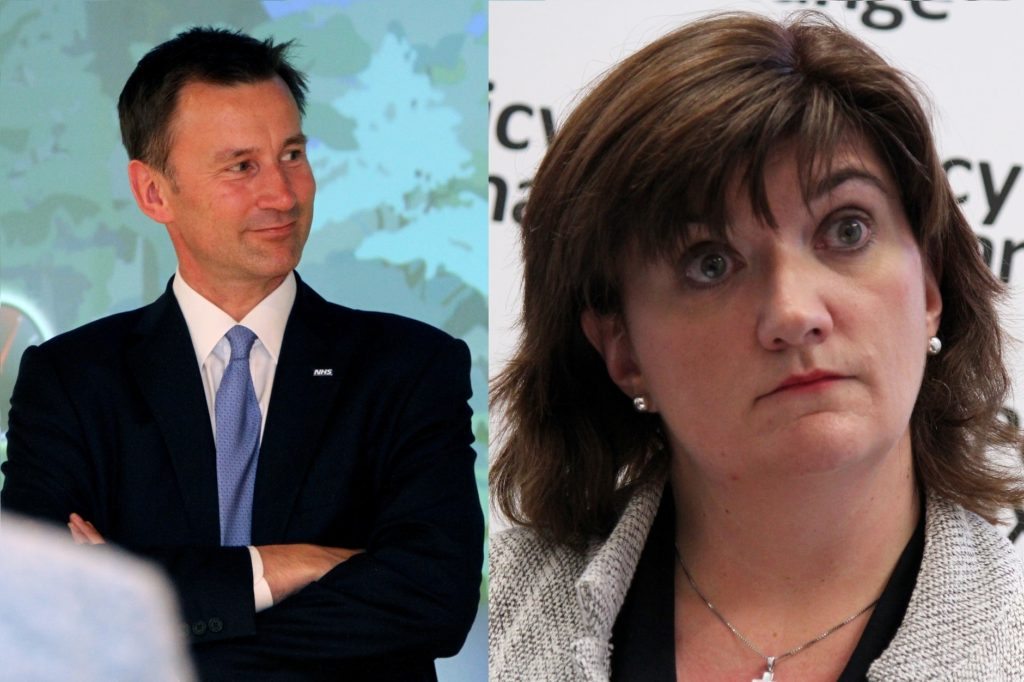 Two of David Cameron’s most senior allies within the Tory ‘Remain’ camp have joined in the EU referendum fearmongering. With no hint of shame, Health Secretary Jeremy Hunt claims that leaving the EU would put the NHS at risk. And Education Secretary Nicky Morgan has the cheek to say that it would be devastating for Britain’s young people.

Ironically, it is the policies of these two cabinet ministers that are the real threat to the NHS and young people. So while both sides of the EU debate have been tarnished by using fear tactics, the hypocrisy from the Tory ‘Remain’ camp here is breathtaking.

Jeremy Hunt is the real risk to the NHS

Since succeeding Andrew Lansley as Health Secretary in 2012, Hunt has dutifully continued the Tory mission to destroy the NHS and hand it over to the private sector.

Hunt’s ‘7-day NHS’ buzzwords are a gambit to further cripple the NHS so it can then be ‘saved’ by private companies. In other words, they attempt to conceal the Conservatives’ privatisation agenda through packaging it as patient-centred.

If it were truly about patient safety, there would not be unsustainable funding holes within the NHS. Yet Hunt argues that it is leaving the EU that will “truly undermine the public finances”.

The real threat to our NHS is Hunt and the Conservatives:

A fully public NHS was built when public debt was at 225% of our national income (GDP). It is currently at 89.4% of GDP, up 11% under this Conservative government. It is not a matter of fiscal necessity that we starve the NHS of funding. It is a political choice to privatise our health service.

Hunt and the Tories are the real risk to the NHS. And Hunt’s most recent ‘Remain’ argument amounts to flabbergasting hypocrisy.

Nicky Morgan is the real risk to young people

Nicky Morgan is now presiding over the forced academisation of all schools in England. This is an ideological move which is at odds with the evidence. While funded by the central government, this academisation amounts to the nationwide privatisation of our schools, with deeds to the land and institutions being handed over to the private sector for peppercorn rent.

Morgan and the Conservatives are the real risk to our young people:

Both Hunt and Morgan have set our their ‘Remain’ stalls, and they are as audacious as they are hypocritical.

Hunt himself is educing fear for the NHS in the British public by defunding it, and is now using this fear for his own political gain. Meanwhile, Morgan has decided that nationwide academisation is the ticket for our young people, despite there being no evidence for this, and vehement opposition from the teachers themselves. Then she manipulatively uses ‘young people’ to try and tug our heart strings towards her own personal political choice.

Getting these two monumental hypocrites on board is a brilliant idea, but only if the objective is to do as much damage to the ‘remain’ campaign as possible.

– If you’re sleeping at the wheel and haven’t done it yet, SIGN the petition against academisation.

– Support The Canary so we can continue to bring you the stories that matter.

– Write to your MP, and tell them what you think about the government’s wholesale move to academise schools and privatise the NHS.