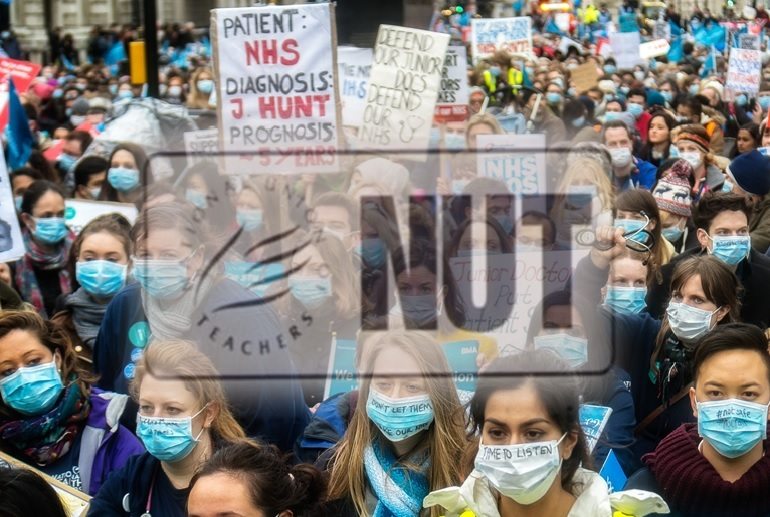 The Conservative government may have a long summer ahead, as healthcare and teaching professionals promise a united front against unpopular policies. With junior doctors still striking against the government’s imposition of a new contract, teachers are now considering their own strikes in opposition to plans to force all schools to become academies. And the largest teaching union, the National Union of Teachers (NUT), has now expressed its desire to “take action with junior doctors”.

At the end of the recent NUT conference, the union’s General Secretary Christine Blower spoke about how she had received a letter from the British Medical Association (BMA). This was a statement in solidarity with the NUT’s decision to ballot members over strike action against forced academisation – which the union fears would see the abolition of national pay scales and conditions.

If there is scope to take action with junior doctors, you can be sure we will… We will, of course, continue to offer solidarity on each of their forthcoming strike days

She explained the reason for this support, saying:

The attacks on junior doctors are largely the same as the attacks on teachers. The BMA is clear that the contract the Government is seeking to impose will make the health service less safe. The attacks in the ‘wrong priorities’ White Paper will destroy our education service. Teachers and doctors are central to ensuring that we have decent public health and education services. We have common interests. We should indeed unite our fights.

The united action between doctors and teachers could include rallies or demonstrations. And while a joint strike would be illegal, they could arrange separate actions for the same day.

The government remains stubborn in the face of a storm

Responding to Blower’s comments, a Department for Education spokesperson said:

This sort of determination to go on strike – over entirely unrelated issues – is especially disappointing.

But the reality is that the government’s disputes with doctors and teachers are not “entirely unrelated”. They are both cases of the government ignoring the voices of professionals and trying to impose unpopular policies in spite of strong opposition.

Health Secretary Jeremy Hunt handled the junior doctor dispute horrifically, making industrial action inevitable. And Education Secretary Nicky Morgan is now doing the same to teachers. Speaking at the conference of The National Association of Schoolmasters Union of Women Teachers (NASUWT), Morgan spoke about her reluctance to make a U-turn on forced academisation (video below):

I want to be clear there will be no pulling back from that vision, there is no reverse gear when it comes to our education reforms

This attitude ignored the immense opposition in the teaching profession towards the government plans. It also led NASUWT General Secretary Chris Keates to criticise Morgan for pushing “negative buttons” in her speech. Keates warned Morgan not to take such a stubborn stance, saying:

Don’t allow yourself to become the next Iain Duncan Smith: listen to the concerns being raised.

Morgan was heckled during her speech as she insisted education has improved under the Conservative government and asked the union to be more positive:

Labour leader Jeremy Corbyn, meanwhile, showed what can be achieved when politicians listen to professionals. Speaking at the NUT conference, he received standing ovations for opposing forced academisation and insisting that he will stand alongside teachers:

And Corbyn was not the only person to support teachers’ plans to resist the government’s academisation plans. Many took to Twitter to share their views on the prospect of joint action between teachers and junior doctors:

Dear Tories, when both the teachers and the doctors are on strike, you really need to wake up and realise it's YOU!

When doctors and teachers start going on strike that's usually a good indication your country has a rubbish Government!

Teachers& junior doctors plan to strike back together against cuts to education& the NHS. Fantastic-100% behind you pic.twitter.com/jQBriO2Rab

The junior doctors’ strike is no longer a one off. It now seems the government is making a habit of alienating public sector professionals. And the further it walks down this path, the more it chips away at its own credibility with the British public.