Icelanders just made history, and are calling on Brits to follow their lead (TWEETS) (VIDEO) - The Canary 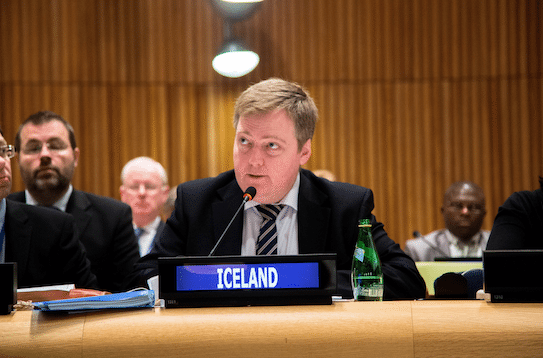 As of Thursday 7th April, Iceland has a new Prime Minister. In what the UK media are expectantly calling ‘the first‘ political casualty of the Panama Papers scandal, the island saw Sigmundur Davíð Gunnlaugsson step down after 10% of Icelanders turned up outside their Parliament, outraged by the revelation that the Prime Minister and his wife had ties to tax havens and Iceland’s collapsed banks.

The similarities to revelations about David Cameron are striking. Huge family wealth and ethically questionable financial interests are tied up in shares that we are reminded over and over are ‘perfectly legal‘. Officially, Gunnlaugsson has only stepped down for an “unspecified amount of time” while his deputy, and Agriculture and Fisheries minister, Sigurður Ingi Johannesson takes his place.

However, protesters in Iceland continue to demand further action. And with much encouragement from the Icelanders, protesters in the UK are following (quite literally) in their footsteps by gearing up for their own public assembly on Saturday afternoon.

Icelanders are steadfast, maintaining that it’s not enough for ministers of the ruling party to simply swap places and assume they’ve appeased public dissatisfaction. And this dissatisfaction is shown clearly by the considerable rise in the polls of the opposition: the ‘Pirate Party’.

Iceland: Pirate Party way up in the polls pic.twitter.com/RNCuOX2x0h

Robert Mackey at The Intercept has commented on the outpouring of political conviction and mutinous celebration online:

The chaotic handling of the affair baffled and infuriated many in Iceland, who vented their anger online using the hashtag #cashljós, which is a pun based on the name of the television program that aired the prime minister’s disastrous interview, Kastljós — the Icelandic word for “spotlight.”

Brits have joined them, by using a combination of the creative #CurseDavidCameron and the far more formal and straightforward #resignCameron.

People take to Twitter to #CurseDavidCameron in the most British way possible. pic.twitter.com/LphaWRCX4u

Working alongside each other the Icelandic public, their increasingly popular Pirate Party, and other opposition parties are now calling for a vote of no confidence and immediate re-elections. This motion will be tabled on Monday. Meanwhile, the new Prime Minister ‘insists‘ that he and his party have “the necessary support to keep running the country despite the protests”.

Leader of the Pirate Party Birgitta Jónsdóttir, a free speech and digital rights activist who worked on the infamous WikiLeaks video “Collateral Murder”, says Jóhannsson has “rejected demands to stand down immediately and call snap elections” and instead has “agreed to bring forward polls due in spring 2017 to this autumn.”

Her party, whose campaigning focus is human, digital and democratic rights, have been criticised by the former Prime Minister and others in power as ‘dangerous’ and ‘rubbish’.

That guy behind me called my party "rubbish he is also going to continue as finance minister #panamapapers #iceland pic.twitter.com/lCVzK7lv6M

Icelanders speaking to AJ+ have some suggestions for the rest of the world, while continuing to lead by example:

Iceland has a New Prime Minister“I believe, when people come together they can achieve huge political change.” – A message from Icelanders to Americans.

Their confidence in their ability to participate immediately, directly and effectively in their democratic process has been proven successful once already. If they continue to hold fast, they may be able to seize and create an unprecedented historical moment.

The question for the UK, US and countries all around the globe is will we follow their lead? And will we come together, globally, using the limited but widespread tools we now have to interrupt patterns of corrupt power and inequality?

A protest has been hastily arranged this week to sit outside Parliament until Cameron too is ousted. Already, 50,000 people are invited and thousands of those have said they are either attending or ‘interested’ (plenty of us, especially young people driving these movements, are required to work weekends of course.)

Political movements toward equality continue. Icelanders have not only shown, but challenged us to act on a very real opportunity to intervene in a shake-up of a long-standing toxic culture of entitlement in politics.

Join the protest in London on Saturday 9th April

Write to your MP demanding action be taken in Parliament

Learn about our tax system at Tax Research UK.