The UK's own 'Serial' podcast is lifting the lid on corruption, and going viral - Canary 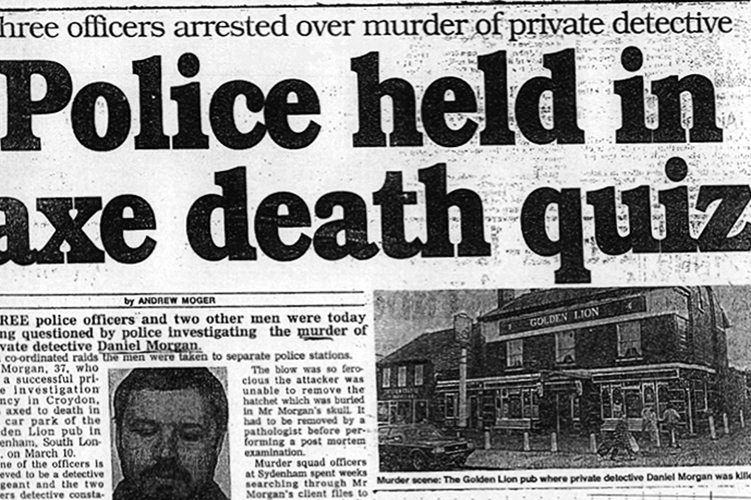 A UK podcast about “the most investigated murder in British history” has been sitting around the top of the iTunes chart in the six weeks since it began. Untold: The Daniel Morgan Murder is a story of police brutality, corruption, and media deception, in a case that has seen 5 murder inquiries, a coroner’s inquest and an ongoing panel inquiry.

And considering that amount of activity, the podcast has the perfect tagline: if you haven’t heard this story, ask yourself – why?

The Untold podcast has so far revealed the first half of the story of Alastair Morgan, brother of private investigator Daniel Morgan. On 10 March 1987, Daniel was brutally axed to death in the car park of a pub in south-east London – just days after telling friends he was about to sell a story on police corruption to Murdoch’s then-best-selling News of the World. Almost immediately, Alastair began to unearth evidence that his brother’s murder was an assassination – uncovering links to Daniel’s colleagues, the police, and the media. But even after Alastair’s suspicions were corroborated by an inquest, nothing was done. Legal action was prevented at every turn.

Through the story of Daniel’s murder – and Alastair’s torturous quest for justice – we get an insight into the dark corridors of power in UK policing and the media.

If we accept that human beings with power will always be potentially corruptible, that there will never be a world without violence, and/or mistakes, then we accept that no police force will ever be perfect. But the many levels of collusion and corruption at play in police forces on both sides of the Atlantic, show that culture is clearly in crisis.

Speaking to The Canary, the podcast’s producer Peter Jukes claims that, by its very nature, the police force is an authoritarian body. He has worked with the force many times for research – he is a screenwriter whose IMDb page lists numerous cop shows. He describes the police as generally “very nice”, but notes that London’s Metropolitan Police (the Met) in particular has had a “problem with authority”, having only come under the oversight of a police authority, to maintain scrutiny and accountability, in 2000.

Ultimately, it is the job of the press to serve as the watchmen. However, after witnessing the fallout of the phone hacking scandal in 2011, and the resulting Leveson Inquiry into the culture, practice and ethics of the press, the old Latin phrase revamped and popularised by a graphic novel rings ever more true: who watches the watchmen?

The results of the first part of the Leveson Inquiry have not permeated the public sphere enough to translate into action – and in fact, Untold reveals an angle to this unfinished story of press and police corruption that not a lot of people know about – Leveson was never completed.

To answer the tagline’s question, the reason people haven’t heard about this story is that it’s received little media attention. Jukes says that “senior media figures” have been involved with the suspects – to be discussed in the upcoming episodes, no doubt.

A particular journalist implicated in the murder inquiry was also implicated in the phone hacking scandal – out of which came not only the closure of the News of the World, but also the Leveson Inquiry itself. Jukes has extensive knowledge of the subject, having successfully crowdfunded his effort to live-tweet the inquiry.

Jukes says that people learning about the extent of police and media corruption in this country have found it “…pretty shocking. Disturbing”, as he himself has. Listeners have expressed hope that it can ‘open doors‘ in the way the US true crime podcast Serial has recently.

Jukes claims his intention was not to put pressure on the current panel inquiry necessarily. He is hopeful, however, that it will renew interest in the second part of the Leveson Inquiry (Leveson 2) which has fallen by the wayside. Indeed, many people aren’t even aware it was ever supposed to take place.

If you look at Leveson 1, a lot of the underlying material was about this – was about the dark arts around Southern Investigations [Daniel Morgan’s private investigations company]. And phone hacking was the benign tip of that really nasty iceberg, which they pioneered.

Jukes notes that “the police blocked a lot of stuff”, for example, by arresting key witnesses before the first part of the Leveson Inquiry, and that Alastair Morgan only agreed to the current panel inquiry – which has no power to subpoena or compel witnesses – on the basis there would be a second part to the inquiry. There are reports that Leveson 2, an examination of the collusion between the Metropolitan Police and journalists, has been permanently shelved.

There is no immediate way to change the culture of police brutality or corruption, but it has to be taken seriously and adjudicated by an independent body which is transparent, diverse and accountable to the public. It’s clear that the police force does not fully serve its purpose around the world and, in many instances, is actively working against it.

Listen to the podcast directly from the page, or on iTunes.

Support The Canary in bringing you independent journalism.