The UK has the blood of 10,000 Yemeni children on its hands - The Canary 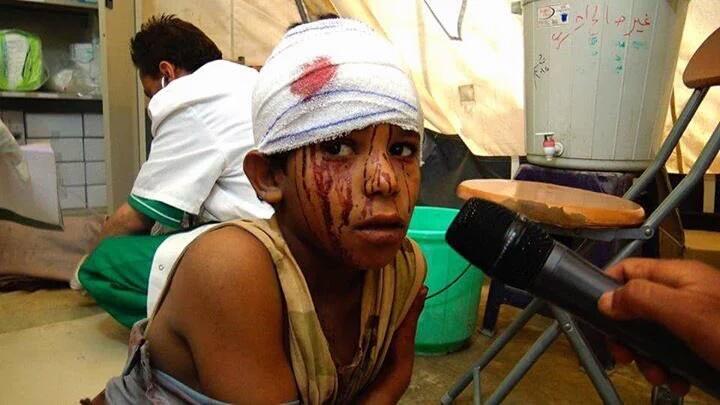 The conflict in Yemen has raged for over 511 days, unabated. All sides are entrenched in their positions after peace talks broke down on 7 August. On 13 August, 10 children were killed when a school was bombed. Two days later, at least 11 people died when a Médecins Sans Frontières (MSF) hospital was attacked. And since March 2015, nearly 4,000 civilians have been killed.

Since the conflict began, the UK has sold nearly £3bn of arms to Saudi Arabia – one of the main protagonists in the Yemeni war. And 10,000 children under the age of five have died due to the destruction of Yemen’s healthcare systems.

Yemen? What about Syria?

The conflict is portrayed in Western media as otherworldly. Something so complex that it’s best left for experts to discuss and for governments to worry about. For this reason, the UK’s “brilliant” arms sales to Saudi Arabia are all considered to be above board, and not to be questioned.

The reality is very different. Yemen’s problems are part of a manufactured context that has existed for decades in the Middle East. Two branches of Islam, Sunni and Shia, set against each other by self-interested regional powers. And Western governments try to maintain influence while companies mercilessly focus on their profit margins – all of them drunk on oil and gas.

The Syrian conflict is easy to sell to the public. The West needs to protect its citizens from the threat of terrorism. Daesh (Isis/Isil) is a danger to the very fabric of our democracy. And Bashar al-Assad is a brutal dictator who needs to be dealt with. In reality, it’s about exactly the same things as all other Middle Eastern conflicts. Money, power, oil and gas. But the public don’t need to know that. Because Syria’s got terrorism with an international reach.

Yemen’s war. A financial one?

The media fail to mention the UK’s financial ties with the Saudi Kingdom. Beyond billions of pounds in arms sales. Like the £7bn of exports they buy from us, every year. The 6,000 UK businesses which rely on our trading relationship with them. Or the £11bn worth of investment the UK government has in Saudi Arabia. Not forgetting King Salman’s £26m London property portfolio.

All these details are far too important to be ignored, because they’re key for understanding why the UK supports this horrific war (which has so far closed 3,600 schools).

Western governments can’t openly admit their concerns about the Bab al-Mandab Strait. One of the most important waterways in the Middle East. A global highway for oil shipments. One that would be compromised (for them) if it fell into the hands of Yemen’s Shia-led Houthi rebels. They mustn’t explain this is one of the reasons they support Saudi Arabia’s bombing of Yemen. Bombing which has left 1.2 million children displaced.

The influence of multinational arms corporations can’t be discussed either. Companies like Lockheed Martin, Raytheon and BAE Systems, which all sponsor the Royal United Services Institute (RUSI). A think tank which gives military and strategic advice to the UK government. And a think tank overly supportive of the Saudi-led coalition’s bombing campaign. A campaign which has left 21.2 million people in need of humanitarian aid. With almost half of those being children.

No one wants to mention the huge profits arms companies are making, either. Like BAE Systems. A company which saw a 25% increase in profits last year. BAE, whose value is $22.4bn. The UK company which manufacturers the fighter jets used by Saudi Arabia. Jets which bombed 49 schools and hospitals in Yemen last year. Jets whose bombs killed 510 children.

The UK politicians benefiting from arms companies are never spoken of, either. But take the fact that over 15% of the members of the House of Lords are shareholders or directors of arms companies. Like Viscount Eccles. Lord Glendonbrook. Lord Lupton and Lord Sassoon. All shareholders in BAE Systems. Or Lord Powell of Bayswater, who sits on the government’s Joint Committee for National Security Strategy. A man who works for BAE Systems and then advises the government on defence spending. Spending which has paid for British troops to advise Saudi Arabia on their bombing campaign in Yemen.

And the revolving door between government and arms companies is never brought up. Politicians who make decisions about war and then profit from those decisions. Like William Hague, the former Foreign Secretary and now Chairman of RUSI. Or John Hutton, Defence Secretary under Gordon Brown and now a consultant for Lockheed Martin. Politicians who take the decision to kill people, and end up earning money from it.

Children? Dying in Yemen? Who cares?

There is silence surrounding all of the above. A silence so deafening it should drown out everything else. But it’s quietly brushed aside. The evidence is ignored. Screams from Amnesty International fall on deaf ears. Legitimate cries surrounding war crimes are muted. All, tragically, because there is too much money to be made. Profit before people. The side in war that always wins.

It’s time the UK admitted its complicity in Yemen. Owned up to its involvement. Ended arms sales to Saudi Arabia. And exerted the strongest influence possible over the peace process. Because we have helped to leave 320,000 children severely malnourished, 10.2 million without safe drinking water, 2.2 million in need of urgent aid, and 10,000 dead. All because of our support for Saudi Arabia’s war.

In short, the UK has the blood of 10,000 Yemeni children on its hands. And it won’t be easily washed away.