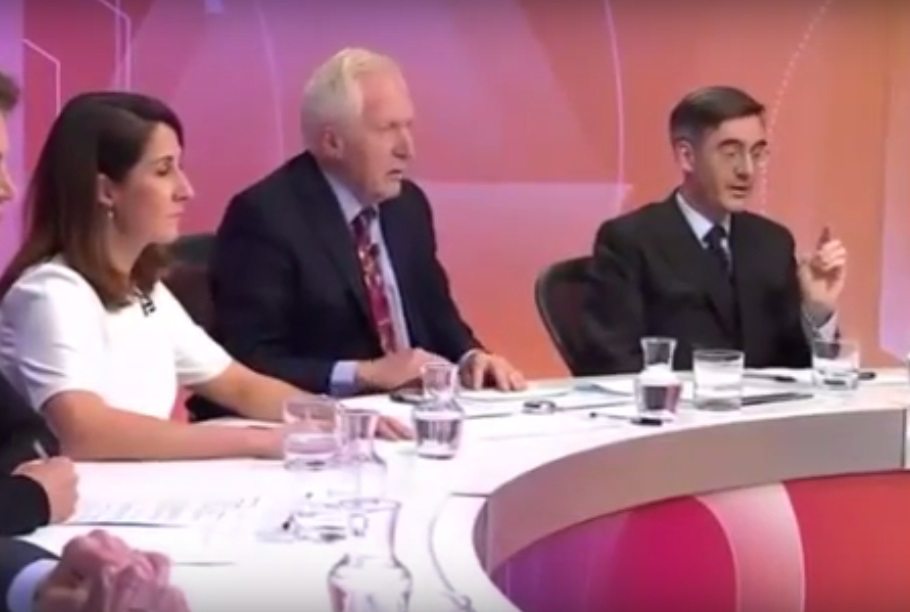 Award-winning film director Ken Loach recently claimed that bias in the BBC and other mainstream media outlets is evident in the way “they put stories together”. And on BBC Question Time on 22 September, there were perfect examples of this when smears aimed at Labour Party leader Jeremy Corbyn were left unchallenged by moderator David Dimbleby.

According to the Cambridge Dictionary, smearing means “to publicly accuse someone of something unpleasant, unreasonable, or unlikely to be true in order to harm their reputation.” Below are some of the apparent smears which Dimbleby failed to question.

“Unlikely to be true”

The debate about the Labour leadership battle began with the following question from an audience member, which received great applause:

If Jeremy Corbyn wins this weekend, is it time that the MPs who oppose him either sign up to his programme or move aside?

Liz Kendall MP, who lies on the right wing of the Labour Party, responded first, saying:

I don’t think that you get unity by telling people, you know, they have to support you. You get it by showing that you can… set credible policies that are right for this century not the last…

With proper scrutiny, Dimbleby might have asked Kendall when Corbyn was supposed to have ‘told people they had to support him’ – a comment seemingly aimed at making Corbyn seem authoritarian. Intervention would have been justified because, judging by the Labour leader’s decision to allow a free vote on both bombing Syria and renewing the Trident nuclear programme, it would seem he is in fact open to debate and disagreement within the party.

Dimbleby might also have asked why Kendall thought Corbyn’s policies were not ‘right for this century’, which seems to be a matter of opinion rather than a fact.

Julia Hartley-Brewer, a presenter from talkRADIO who called MPs like Liz Kendall “very good, hard-working, [and] sensible”, then bulldozed into the debate, saying:

…the Labour Party needs to make a decision right now whether it wants to be a serious alternative government in waiting, or a Friday night Marxist book club.

Dimbleby might have asked Hartley-Brewer here to justify why Corbyn was not a “serious alternative” for her and, more to the point, what she meant when she suggested he was a “Marxist”. In reality, Corbyn hasn’t called himself a Marxist and, when he was questioned in 2015 about the influence Karl Marx had played on his politics, he insisted that the Labour Party “certainly isn’t revolutionary”, and that he wasn’t planning to make it such.

With all of the connotations viewers may have had of the word ‘Marxist’, it could well be seen as unreasonable for the radio presenter to suggest Corbyn was a Marxist. But Dimbleby let this comment stand without any scrutiny.

Liberal Democrat MP Norman Lamb also weighed in to the debate surrounding Corbyn, criticising “the atmosphere around in the Labour Party with the abuse of particularly female members”. And Dimbleby again failed to ask for further explanation.

Lamb’s suggestion here was that women in the Labour Party felt unsafe because of Corbyn’s leadership. But in reality, Corbyn has long opposed all forms of discrimination and abuse, and was responsible for creating the first shadow cabinet with more women than men in parliamentary history. His record as a politician would therefore suggest that he would not condone any of the abuse which some female Labour MPs have faced (particularly since the murder of Jo Cox MP). Indeed, in the hostile political environment of post-referendum Britain, it might also have been worth mentioning that there are opponents of Corbyn who have openly talked about killing and assassinating him.

And to top off the barrage of smears, Tory MP Jacob Rees-Mogg said:

What [Corbyn] thinks is both dangerous and unelectable… It would be dangerous for our national security.

Here, Dimbleby might have questioned how a committed peace activist like Corbyn was apparently more “dangerous” than pro-war politicians who have sanctioned international destruction and the murder of civilians in Afghanistan, Iraq, Libya, and Syria. But he didn’t.

As a citizen-funded media outlet, the BBC is expected to present information in an impartial manner. But as we’ve documented at The Canary, this is not always the case, especially where Jeremy Corbyn is concerned.

And as is the very definition of a smear, BBC Question Time panellists on 22 September were allowed (with no moderation) to publicly accuse Jeremy Corbyn of things that were unpleasant, unreasonable, and unlikely to be true – undoubtedly harming his reputation in the process. Whether citizens like Corbyn’s politics or not, they may well agree that this is not appropriate behaviour from a supposedly impartial public broadcaster.

Press campaign group the Media Reform Coalition (MRC) is now considering taking legal action against the BBC, to push it to uphold its duty of impartiality. Readers can contribute to these efforts by making an official complaint to the BBC about its apparent bias.

– You may like to make an official complaint about BBC Question Time’s failure to hold its panellists’ comments to an appropriate level of scrutiny.

– Learn more about the work of the Media Reform Coalition.

– Watch the full The Media, the Movements, and Jeremy Corbyn event here.

– Support The Canary if you want us to keep holding the mainstream media to account.