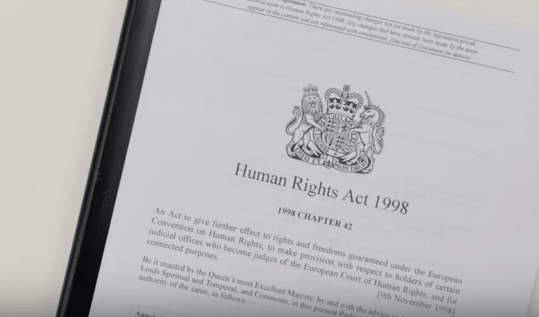 The UK, like all other countries, must submit a Universal Periodic Review (UPR) every four years to the UN, to show how it is meeting its human rights obligations. The Equality and Human Rights Commission requested the British Institute for Human Rights (BIHR) to conduct the report in association with a number of civil society organisations. It was launched in parliament on the evening of 22 September, in an event chaired by Harriet Harman MP.

.@HarrietHarman: A legal right which can't be enforced is not worth the paper it is written on and is not a legal right. #HumanRightsCheck pic.twitter.com/ZokdyAADbi

The opening of the report itself, in fact, does not inspire much confidence:

the Government often proclaims the virtues of human rights on the international stage. However, this report raises some serious concerns from CSOs about the negative direction of travel for our domestic human rights protections.

Here are some of those concerns.

Most worrying, civil society organisations said, was the scrapping of the Human Rights Act (HRA). What the government seems to have a problem with is having to apply it across the board, to everyone – including asylum seekers, prisoners and marginalised groups. It also doesn’t like having to honour human rights when they’re inconvenient or when they’re called to account.

Overwhelmingly, civil society organisations and UK, Scottish and European committees have opposed getting rid of the Act.

This disregard for rights legislation has placed the UK on a worrying trajectory, which has meant less freedom and less protection.

A civil society under control

The report found that civil society organisations have been subject to tighter controls, affecting their ability to lobby. As have trade unions, which must overcome “new legal hurdles” in order to take industrial action.

More it seems can also be done for women’s rights and the rights of children. In particular, 15,000 children from Syria have still yet to be united with their families.

The treatment of young people in prison also needs improvement. It seems the overall number of children in custody has fallen, but there has been an increase in the use of restraint, something which is encouraged to be used sparingly. The government also failed to take action against Medway Young Offenders Institute, where abuse accusations have emerged.

Austerity and government policies have impacted poverty in the UK. Welfare cuts over the four years have had a disproportionate effect on people with disabilities, single parents, children and ethnic minority groups. Correlating with this is the unprecedented rise in food banks and the unrelenting housing crisis, including these stark numbers:

The report also slammed policies and legislation that promoted divisiveness. These include discriminatory counter-terrorism powers, stop and search policies and even Brexit. And hate crimes rose dramatically the day after the EU referendum polls:

Reports show that since the Government’s policy of creating a ‘hostile environment’ for irregular migrants, BME individuals have been discriminated against even though they have the right to be in the UK.

Furthermore, the prison system remains under threat from overcrowding, increasing assaults, rising death rates and segregation affecting the physical and mental health of prisoners. Access to justice was also deemed to be moving further out of the reach of those who cannot afford legal fees without legal aid, as laws relating to legal aid have changed.

Immigration and asylum policies predictably raise concerns, but in particular, the use of detention procedures.

The UK is still the only European country without a time limit on detention. Despite UK Government assurances that detainees are only held for the minimum period necessary, some are held for up to four years.

While concerns are expressed across the whole of the UK, the devolved nations appear to have a better track record than England.

The bottom line is that the general spirit of human rights is respected inside the country. But the spirit level is tipping downwards now, and the government has implemented policies that have affected the already vulnerable.

It has also placed itself in a hypocritical position by failing to adhere to the same human rights standards it holds others to. The decline in rights-based approaches has not gone unnoticed by the UN. 132 recommendations were put forward in 2012, in contrast to the 28 put forward in 2008.

The UK plays a major part in the international community, and is a permanent member of the Security Council. UN recommendations must therefore be taken seriously and implemented if the UK is to remain a free and equal place for everyone.

Get Involved!
– Read the full report here.
– Support BIHR and the work they do.
– Write to your MP if you share any of these concerns.
– Add your voice and save the Human Rights Act.
– Read more Canary articles on human rights.
– Support The Canary if you appreciate the work we do.
Featured image via video grab
Support us and go ad-free