Brexiteer tries to encourage a boycott against Walkers and Gary Lineker, but it backfires spectacularly [TWEETS] - The Canary 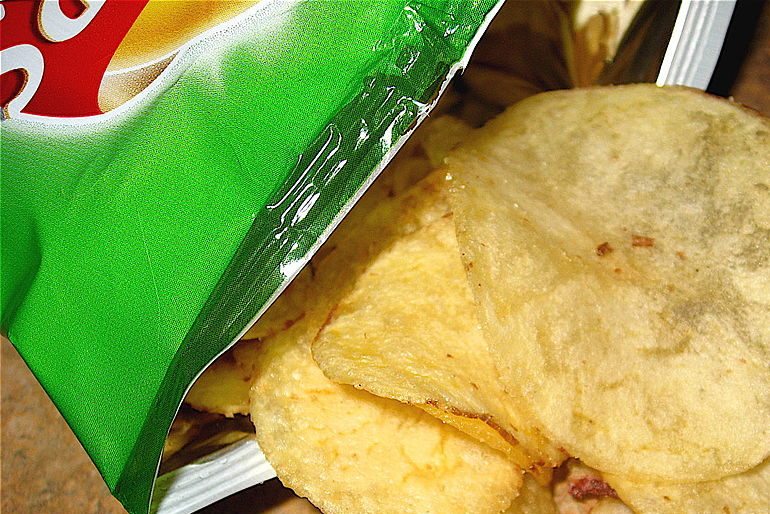 Gary Lineker is usually popular with Brits for being an England international football player and hosting Match of the Day. But being vocal on Twitter about Brexit and the refugee children currently being transported to the UK from Calais has made some people angry – one so angry, in fact, that he tried to launch a boycott of Walkers crisps, which Lineker has been the face of for years: 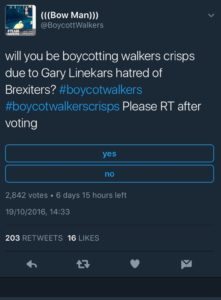 The poll was created on 19 October to ask if people would be boycotting Walkers crisps “due to Gary Linekars [sic] hatred of Brexiters”. After the EU referendum vote, Lineker tweeted that he felt “ashamed” by the result, and that “we’ve let down our children and their children”:

Feel ashamed of my generation. We've let down our children and their children.

Lineker has now tweeted his dismay at the treatment of the child refugees from Calais, being allowed asylum in the UK. There is currently speculation as to whether these children are ‘really’ children, and calls for them to be forced to have dental checks to help verify their age.

The treatment by some towards these young refugees is hideously racist and utterly heartless. What's happening to our country?

I'll say what I want on my twitter feed, thanks. However old they are they're bloody human beings, like you….well sort of. https://t.co/j3bq24k7Ox

Wonder what makes some people feel, by sheer good fortune of place of birth, superior to others. I need a lie down.

His opinions were seen as so outrageous that they made the front page of The Daily Star on 20 October:

It naturally follows that a boycott of Walkers is next. Unfortunately for @BoycottWalkers, the account that created the poll, it doesn’t appear to have gone to plan: 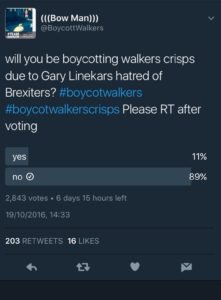 In fact, in eight hours, the poll had over 2,800 responses – with a vast majority voting that no, they would not be boycotting the crisp company. The poll was swiftly deleted and replaced with a new one requesting that only those who voted Brexit respond:

But of course, Twitter being Twitter, 92% of the 1,089 people who have voted have made it clear that they would not boycott Walkers.

This campaign may not have hit the ground running, but it’s okay – there’s always Match of the Day to boycott next.

– Donate to Save the Children.

– Sign the Scottish National Party’s petition against airstrikes in Syria.