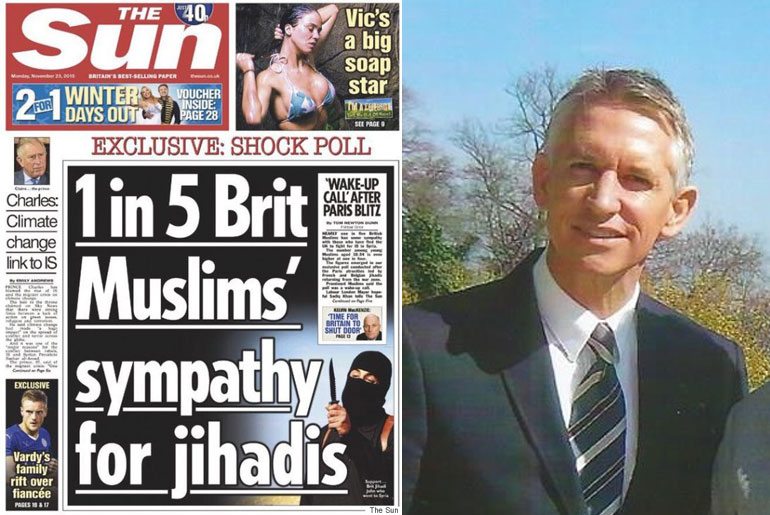 A journalist from The Sun who has been calling for Gary Lineker to be sacked from his job at the BBC is one of the journalists implicated in corruption among journalists, police and public officials.

Nick Parker, The Sun‘s Chief Foreign Correspondent, wrote on 20 October 2016 about calls for Lineker to be sacked for his “migrant lies”. Lineker has been outspoken in his support for the child refugees who have been coming to Britain from Calais in the last few weeks:

The treatment by some towards these young refugees is hideously racist and utterly heartless. What's happening to our country?

This angered some so much that they called for a boycott of Walkers crisps, which Lineker has been the face of for years. The Sun rode the wave of this mood with a front page that read:

OUT ON HIS EARS: Calls for BBC to fire Lineker as he peddles migrant lies.

According to Parker, the BBC was “under pressure to fire Gary Lineker” after he had retweeted a suggestion by the fostering charity TACT that a picture printed in The Sun questioning the appearance of one of the child refugees was in fact an image of an adult interpreter.

The claim was later proven inaccurate by the Home Office, and despite Lineker never actually stating it as fact himself, he had apparently stepped too far nonetheless. Tory MP David Davies said:

I question if the BBC should be employing him when he seems to be using his fame to push out his rather emotive and controversial views.

Davies’ fellow Tory MP Alec Shelbrooke echoed this view, stating that Lineker “can’t be both” a political activist and a BBC sports journalist.

The BBC has made it clear it disagrees, insisting that Lineker is a freelance broadcaster and his Twitter account is personal. And as blogger Tom Pride has pointed out, The Sun‘s calls are coming from a journalist who was convicted of handling stolen property.

Parker was found guilty in December 2014 of possessing a mobile phone stolen from MP Siobhain McDonagh in 2010. The Old Bailey heard how Parker had accessed McDonagh’s private texts. His defence was that he was just doing his job.

Regardless of his criminal record, the paper “welcomed” Parker back in 2015.

It’s easy to see why, considering his article on Lineker.

It starts by talking about the refugee whose age was allegedly 38. This number originated from The Daily Mail, which used facial recognition software developed by Microsoft called how-old.net.

Microsoft itself has stressed that this was meant to be a “fun app” and is “not intended to be used as a definitive assessment of age”.

Parker also claims that Lineker branded “anyone questioning the age of dubious child refugees ‘hideously racist'”. In fact, Lineker described “the treatment of some” towards the young refugees as “hideously racist and utterly heartless”. And a quick search of Twitter suggests this statement is absolutely true.

Parker also uses Lineker’s appearance as a stick to beat him with. The height of professionalism, of course.

If a conviction for handling stolen property in order to read through the private texts of a politician is not an offence worth losing a job over, it seems hard to believe that having strong opinions in favour of refugees should be.

But in light of numerous controversies, including its Hillsborough coverage, it would be naive to expect any form of moral consistency from The Sun.