Jonathan Pie slams Theresa May over the NHS, and this time she needs to 'f*cking listen' [VIDEO] - Canary 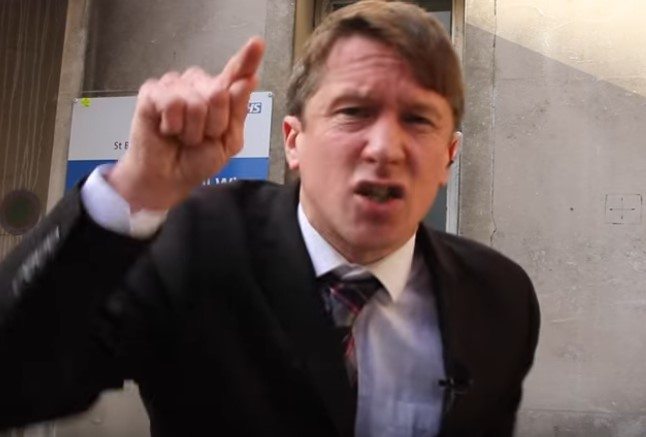 ‘Jonathan Pie’  has slammed Theresa May over the NHS in a new video regarding the cap on nurses’ pay. Actor Tom Walker, who created the fictional news reporter Jonathan Pie, has lent his support to the ‘Scrap the Cap’ campaign. This aims to highlight the shocking working conditions in the NHS, due to the years of 1% pay caps imposed by the Conservative government.

Pie has slammed May over the NHS before. But this time he’s highlighting the situation for many nurses, which is dire:

@pauljmcgann A RT of this video we made to highlight nurses' poor working conditions would be greatly appreciated #scrapthecap #SaveOurNHS pic.twitter.com/MFVDsOHres

Since 2010, nurses have seen a wage drop of around 14% in real terms. This has led many to rely on food banks and payday loans. As The Mirror reported, one payday loan company has seen applications from nurses nearly double since 2013. And since then, student nurses have received almost £5.2m from universities in hardship grants. They have helped around 6,500 student nurses who struggle to make ends meet.

But with the scrapping of the nurses’ bursary, the situation may only get worse. The funding is going to be cut in September 2017, and is worth around £6,200 a year. Unions and campaigners claim this will leave student nurses with over £50,000 of debt. The government argues this will save the taxpayer around £826m a year and help it create an additional 10,000 training places in five years. Campaigners against this move say it is saddling students with debt they cannot afford and will impair recruitment and retention by putting people off joining the profession.

An NHS housing and recruitment crisis

Nurses are also struggling with housing costs, especially in London. The Royal College of Nursing (RCN) conducted a survey [paywall]. The research found that two fifths of nurses will be forced to leave London in the next five years, due to housing costs. Also:

The NHS is also facing a nurse recruitment crisis. There were 23,443 nursing vacancies in England, Wales and Northern Ireland in June 2016. This was equal to 9% of the workforce. The Royal College of Nursing (RCN) says that the 1% pay cap is unsustainable, as it’s making nursing an increasingly unattractive profession. Also, with an ageing workforce, the cap makes it difficult to persuade current nurses to continue working.

The RCN and 12 other unions have called on the government to scrap the cap. They say that, unless things change, nurses will be earning less than the minimum wage in five years. And RCN Chief Executive and General Secretary Janet Davies says that, if pay for nursing staff continues to fall in real terms, patient care could be at risk.

A petition that demands an end to the pay cap already has over 32,000 signatures. Parliament will consider a debate if it reaches 100,000. Danielle Tiplady, one of the organisers of the Scrap the Cap campaign, told The Canary:

The pay cap is incredibly damaging on the purse as well as on morale, consequently many nurses are sadly leaving or thinking of doing so. Staff are struggling to make enough to pay their bills, rent and get by and feel undervalued and disrespected. This is why we demand an end to the pay restraint immediately. 1% is not sustainable. We have money for war, money for Trident, money for runways, money for MP’s pay rises, yet we cannot give NHS workers the pay rise they deserve, it does not make any sense.

The NHS is now in a constant state of crisis. The dispute over the junior doctor’s contract is still not settled; Tory pledges on funding have been exposed as false; and privatisation is rapidly creeping into the system. Nurses must be paid a living wage, as they are part of the backbone of the health system. Otherwise, the NHS will suffer even more than it is already. And so will its nurses.

– Read more articles on the NHS from The Canary.