Oxford Dictionaries just summed up 2016 in a single word - Canary 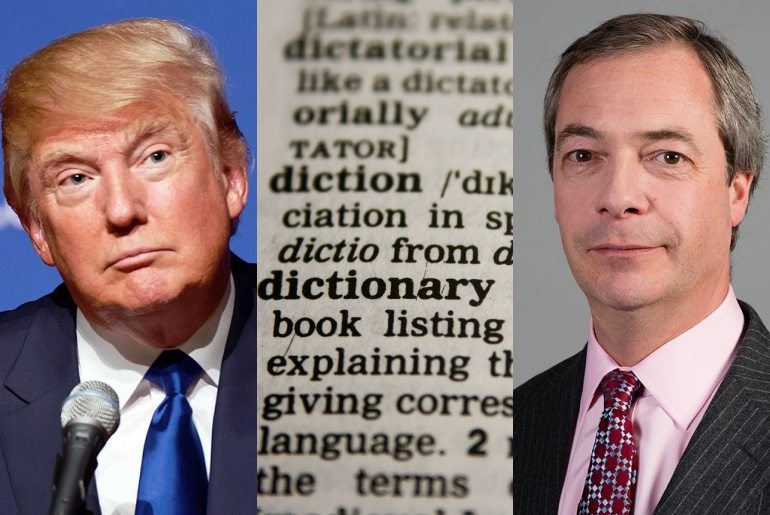 Oxford Dictionaries have announced their word of the year. And it pretty much sums up the political situation at the end of 2016: “post-truth”.

It has been defined as an adjective:

relating to or denoting circumstances in which objective facts are less influential in shaping public opinion than appeals to emotion and personal belief.

According to Oxford Dictionaries, while the word has been around for some time, its usage spiked in 2016 especially around the time of the EU Referendum and the US election.

It’s not surprising that our choice reflects a year dominated by highly-charged political and social discourse. Fuelled by the rise of social media as a news source and a growing distrust of facts offered up by the establishment, post-truth as a concept has been finding its linguistic footing for some time.

Many election campaigns are filled with false promises and manipulations. David Cameron, for example, famously promised there would be no changes to tax credits in the run up to the 2015 election.

But the campaigns this year were different. Instead of backtracking on previous promises, falsehoods were portrayed as facts. The £350 million figure the UK sends to Europe was widely debunked, but that didn’t stop the Leave campaign using it repeatedly. And, it only took hours after the referendum result for Nigel Farage to say that claiming that money would be used to fund hospitals was “a mistake”.

Meanwhile, in the US election, Trump ran a campaign with a very dubious relationship to the truth. He claimed to be an “environmentalist” despite having previously tweeted that ” the concept of global warming was created by and for the Chinese in order to make U.S. manufacturing non-competitive”.

And, his claims on immigration were widely debunked. He warned that:

When you’re working for Hillary, she wants to let people just pour in. You could have 650 million people pour in and we do nothing about it. Think of it. That’s what could happen. You triple the size of our country in a week.

But, as The Washington Post pointed out, not only this is unrealistic, it’s pretty much impossible.

But one of the reasons why post-truth so aptly sums up 2016 is the very nature of the new elite who are taking their place. Somehow rich, privileged, white men have portrayed themselves as anti-establishment and, strangely, it has worked. They have appealed to emotion – and the basic facts about the very essence of who they are have been ignored.

There are so many reasons why people are rightly angry at the elites; at the establishment. Let’s just hope 2017 becomes the year when, instead of scapegoating immigrants and minorities, we start taking action against the real causes of the problems we all face.