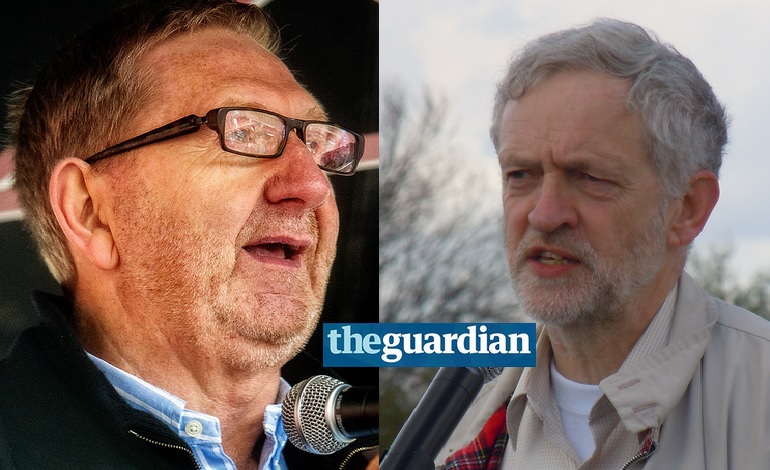 The Guardian began the first week of 2017 with a fake news story about Jeremy Corbyn. Drawing from an article in The Mirror, it led readers to believe that support for the Labour leader from Unite union boss Len McCluskey was in question.

But comments made by McCluskey, from which The Guardian derived its assertion, do not suggest that at all. Although the publication’s decision to allude to this situation does say a lot.

McCluskey says one thing, the media report another

McCluskey was commenting on the Labour Party’s hopes at the next general election. As The Mirror reported, he said:

Let’s suppose we are not having a snap election. It buys into this question of what happens if we get to 2019 and opinion polls are still awful.

The truth is everybody would examine that situation, including Jeremy Corbyn and John McDonnell.

For The Guardian, and other mainstream media outlets, this translated into a warning from McCluskey that “Corbyn may step down if polls don’t improve”. Yet ‘examining’ the situation doesn’t automatically equate to stepping down. It could mean re-evaluating policies or messages. It could also mean changing the ways in which those ideas are delivered to the public.

These two are not egomaniacs, they are not desperate to cling on to power for power’s sake.

Again, this could mean the two would be willing to step down. But it might also suggest they would be open to compromise, or shifting the balance of ‘power’ to others. In fact, Corbyn has already suggested a power shift in favour of the party’s members. But for mainstream media outlets, analysis of McCluskey’s statements ended only with the derailing of Corbyn.

The Guardian starts on point

The Guardian did not waste time in illuminating what these comments by McCluskey implied about his current attitude to the Labour leader. In the first sentence of the article, it noted that McCluskey “has insisted he still supports” Corbyn, regardless of the comments.

It also included a tweet that the Unite4Len account had posted. This is the official Twitter account for McCluskey’s re-election campaign as Unite General Secretary. The tweet, The Guardian noted, showed McCluskey’s insistence that his comments “did not mean his backing for Corbyn was ebbing away”.

Who said McCluskey’s backing for Corbyn was wavering in the first place? No one. But The Mirror had begun the “step down” rumour. And The Guardian then picked up that bogus ball and used it to throw McCluskey’s support for Corbyn into dispute. And so, at the hands of the media, the fictitious seed was planted.

McCluskey did comment on his support, as Unite leader, for the Labour Party in general. He said:

It’s always based on critical support. It’s my job to promote Unite’s policies, not Labour’s.

The Guardian‘s latest flawed ‘story’ follows another on 24 December. As Glenn Greenwald detailed in The Intercept, that day the outlet published a piece about Julian Assange. It was based on an interview between Assange and Stefania Maurizi of Italy’s La Repubblica.

In The Guardian article, writer Ben Jacobs claimed the WikiLeaks founder had given “guarded praise” of incoming US President Donald Trump. And he asserted that Assange had said his whistleblowing site was not needed in Russia because an “open and competitive debate” exists in the country. But Assange said neither of these things in the manner Jacobs suggested, and his interpretation of the interview has left Maurizi “furious“. But as Greenwald noted in a tweet:

Since Assange is the Official Devil, anything goes, but if you compare his actual interview to the Guardian's false summary, it's stunning.

The Guardian subsequently amended the article on Assange. But that initial retelling of his words, and the interpretation of McCluskey’s comments, shows that fake news does not just exist outside of the mainstream. It is deeply entrenched within it. And if we are to have an intelligent discussion on how to deal with it, all parties must be included.