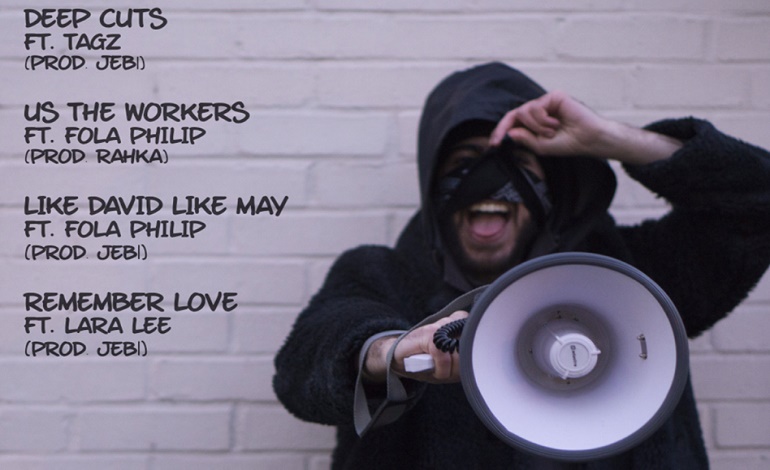 A conscious rapper and community organiser has just released his latest EP. In it, he talks about the many problems facing 21st century Tory Britain. And The Canary is excited to announce that he’s given us the premiere of this groundbreaking collection of tracks.

Coming from a single-parent, working-class family on a council estate in south-west London, it’s politics and social issues which shape Whisper’s music.

Since 2015, Whisper has come into his own. From the grime-heavy anti-gentrification anthem Brixton First featuring Lara Lee from The Voice, to his collection of spoken word Rhyming Guides To… his artistry and ability to twist politics with music and words is fast gaining him a reputation. And his latest EP New Radical showcases Whisper at his furious yet eloquent best.

The Canary is proud to host the premiere of New Radical. Listen:

What is a ‘New Radical’?

Whisper explains what he means by ‘New Radical‘: 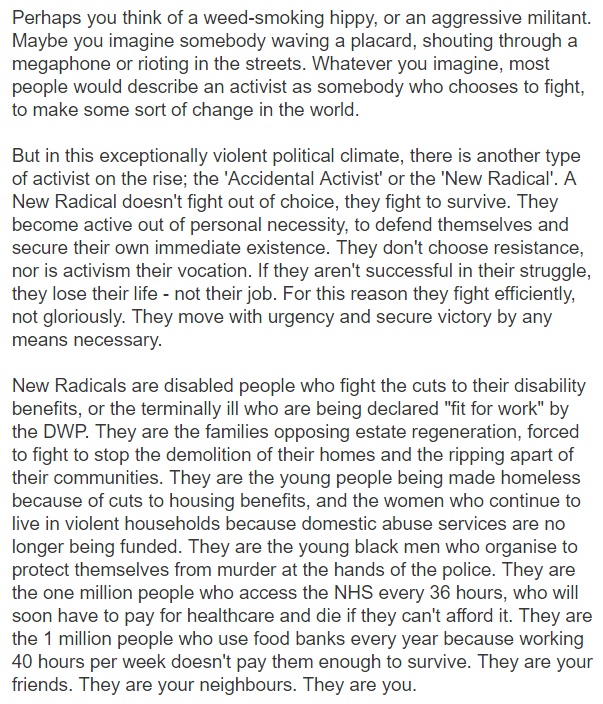 Rage against the dying of the light

To coin a phrase, New Radical is a rage against the dying of the light; the light in this case not being old age as per the Dylan Thomas poem, but capitalism and the Conservative government’s dismantling of everything we hold dear. But that doesn’t mean the EP itself has no light and shade. And while there are various common themes running through the music and lyrics, each track is as individual as the artist himself.

The first is Deep Cuts, which is a direct reference to austerity and the Tories’ cuts to public services. Pacey, dark and grime-heavy, and featuring the rapper and vocalist Tagz, Whisper makes clear his views on the cuts imposed after the 2007-08 financial crash. He spits “They said they loved you, but then they cut you. They never loved you, they only fucked you…”. And he’s also clear about what we should do about it:

Run up in the bank like “gimme the money back!”
Stand back! Grabbing that. Baddin’ the 1%
Then when I’m done there, I’ll run up on Number 10…

On Deep Cuts, Whisper says that austerity is “simple to understand. It’s robbery”. He asserts that instead of funding public services like the NHS, the Tories are essentially taking our money and giving it to the banks. “They are stealing our money, and thousands of people are dying as a result”, he says: “When they cut – we bleed”:

Imagine you’re walking down the street and a frail old man in a suit and tie tries to rob your phone. What would you do? Would you allow it? Likely not. So why do you allow old men in parliament to rob you? They’re stealing your services. You gonna have that? They’re taking you for a dickhead.

Deep Cuts is possibly the strongest track of the four. Sharp, fiery and raw, it has the makings of a grime anthem. And lyrically it is Whisper at his best, with subtle but highly pertinent references to political manoeuvres.

An anthem for the masses?

The second track on the EP is Us The Workers. Slower in tempo, but still with the signature swooping grime bass line and sharp flow from Whisper, it discusses just who actually makes the country ‘work’:

Us The Workers is also personal to Whisper. He discusses the situation with his own father – but also uses it as a metaphor for a worker’s relationship with their boss. He told The Canary he chose to reference his own life because:

Work is personal. Politics is personal. Every decision they make affects us personally, every single day of our lives. I think it’s easy to get lost in the magnitude of politics, but at the very core the main thing that we need to ask ourselves as individuals is: ‘How will this issue/policy directly affect me on a day to day basis, and is that something I want to support or something I need to fight?’ Politics is personal and we need to start taking it personally. They’re taking us for dickheads.

On Us The Workers Whisper’s vocal flow is impressive. Starting with a sense of almost subdued resignation, he builds and builds the storytelling, leading to a vocal, angry conclusion in the second verse:

It’s war now, I’m worn out. Can’t do it anymore, let’s walk out. Fuck your boss bruv, stuff the lot cuz I ain’t gonna be whored out.

The track ends with the repeat of the call-to-arms chorus: “Matey they need us, the workers. Without us their fuckin’ worthless”.

Throughout the EP there’s a distinct theme of choral-like music fighting against the gritty Grime. The vocals were provided in most part by MOBO award-winning Fola on the EP’s second track, along with the third track Like David Like May.

They’re all the same

The opening bars of Like David Like May are unexpected, beginning with a segment of Jeremy Corbyn’s first ever Prime Minister’s Questions. But it’s a devastatingly appropriate hook, as Whisper goes on to talk about how the Conservative government (and the worldwide political establishment more broadly) don’t even try and hide their contempt for us. He spits over dark, sinister and sparse production about the reality of the effects of politics on peoples’ lives:

When a peace sign is radical
And the people fight for capitol
Where the weak all die like animals
Bruv none of us think that’s rational.

Love is all we need

The final track on New Radical is Remember Love. As The Canary previously reviewed, its message is a strong one, asking us to take the anger we may feel and turn it into something positive. The track is a departure from the rest of the EP, and a fitting way to close it. While the grime influence is still apparent, the track’s writing and production is much softer, less abrasive and more measured.

He calls love a “radical” act, and the track urges activists and campaigners to care for themselves in the process of resistance:

If you go too hard, you’ll hurt yourself
You wanna ride you wanna fight
You wanna help the world but first help yourself
Just find your base, find the peace
Breath, rise, find release

Potent Whisper punches crisp and clean….one drop knockouts.. Corrupt politicians are on the ropes… never has sedition sounded so funky. The revolution starts with a whisper.

New Radical is a masterclass in political grime. Edgy, funky and true to the music’s raw origins, it nonetheless manages to take the genre and completely flip it on its head; utilising the breakbeats, bass and heavy use of electronics to make profound political and social points. Whisper’s flow and lyrical content are as impressive as ever, and the production by JEB1 and Rahka EOS is almost flawless.

He is a star in the making, but there’s something about this rapper from south-west London that says that’s not what he wants to be. Whisper just wants to change the world. And he’s doing it, one word at a time.

You can pre-order Whisper’s New Radical here, and the EP is released for sale on 21 March.

– Find out more about Potent Whisper.