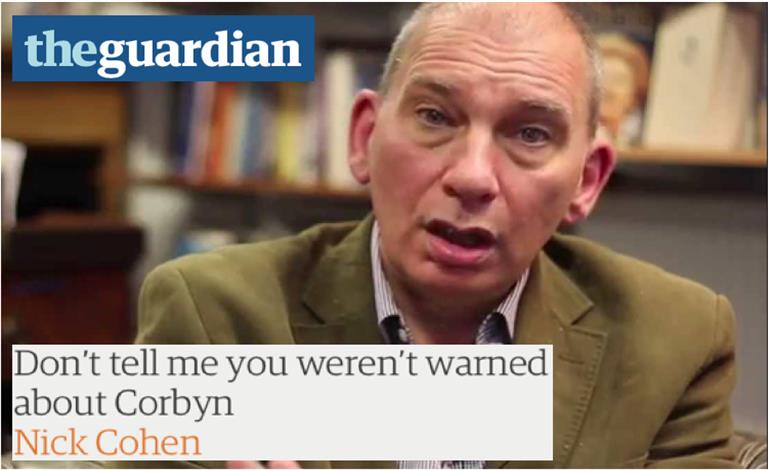 If you were out to parody the self-righteous wailings of the Primrose Hill set, you would struggle to out-do Nick Cohen’s anti-Corbyn rant in The Guardian. But instead of landing a knock-out blow to Labour, Cohen missed his target. He swung a futile haymaker, only to smack himself square in the face.

Nick Cohen and his column

Cohen is a trollumnist. A resident troll, paid by The Guardian/Observer to spew his bile in the direction of the left. His writing aches with tired clichés of the left which he hasn’t bothered to refresh since Bananarama was current. And those decades of rent-a-rant hysteria have been hard on the man. Like the anti-Dorian Gray, I suspect Cohen’s attic is home to a painting of a smiling boy who becomes more beatific year on year.

His latest rant, though, stretches the bonds of decency beyond breaking point. Entitled Don’t tell me you weren’t warned about Corbyn, it is a finger-pointing lecture to working-class voters to listen to the wisdom of Cohen and co. And by the time he reaches his conclusion, he tires of the pointing and goes for just straight-out flipping the bird to anyone who disagrees with him.

He ends his tirade at Corbyn supporters with this:

In my respectful opinion, your only honourable response will be to stop being a fucking fool by changing your fucking mind.

Reminds me of the sort of wit and wordsmithery you’d find daubed in marker in the school toilets.

Of course, this didn’t stop his fellow trollumnists greeting it like manna from heaven. They queued up to heap praise on their fellow class warrior for sticking it to the demonic working-class voter.

Thumping brilliance from @NickCohen4. As invigorating and exciting as listening to a great album: https://t.co/uW67m7umA1

The timing of the column was fascinating. It came on the back of a hideous week for the Conservative government. Beset by scandal, U-turning on the budget, provoking the break-up of the United Kingdom – the May government was in meltdown. But you would never know it from flipping through The Observer, The Independent, or The Guardian – who are all too busy fighting their own petulant squabbles for the right wing of the Labour Party.

A bunch of angry old Trotskyists

Cohen and co. cannot bear a moment’s introspection over the Labour defeats in 2010 and 2015. And God forbid they discuss the slow and painful death of Blairism, which lost the party five million voters. Instead, they adopt the approach of the furious toddler. Fingers in ears, crying eyes clamped shut, and bloodcurdling screams all the way. Today’s conspiracy theory: militant Trotskyists secretly infiltrated the party and painted everyone red.

But what makes this nonsense all the more laughable is that these chaps (for they are mostly chaps) actually are former Trotskyists.

It’s not just Corbyn that they rally to smear. It is any individual or outlet that gives space to working-class, left-wing analysis and opinion. As Theodore Sayeed wrote recently at Mondoweiss, capturing coordinated attacks on Noam Chomsky:

Attacks on Chomsky that seem isolated and unconnected are often the handiwork of journalists and authors who move in the same circles. Kamm for instance is an associate of Nick Cohen’s; he admits to having advised Cohen on how to frame his denunciation of Chomsky in his apostasy book, What’s Left?. Cohen in turn is an ally of Christopher Hitchens who gave him a rave review. In many ways Hitchens was the centre of gravity in this circle around which the rest orbited, its most admired and leading member, a friend to Kamm, Cohen, Francis Wheen, David Aaronovitch, Norman Geras and other contributors to the anti-Chomsky genre of the national letters, in a mutually supportive club of hate against not just him, but against all dissenters on both sides of the Atlantic.

What the last named have in common is they are nearly all British former Trotskyists.

Why is he so angry?

These were the kind of privileged, trustafarian guys who dominated left-wing groups at my University. The sort of chaps who cursed their own privilege for denying them my working-class authenticity. They shouted down women while claiming to be feminists. They demonised the hypocrisy of left-wing classmates for drinking Coke, but spent their summers at the family villa and daren’t tell Ma and Pa they voted Labour.

Then they grew up, networked their way into the commentariat, and started getting paid to do the same thing. Except this time, they’re arguing on behalf of the corporate class.

Cohen and his pals are angry. They are angry because their kind of politics has been shown the door. And they are anxious as hell to get it back.

They want the Tories to be ahead in the polls. They want to promote a civil war in the Labour Party. They want coup after coup to destabilise the leadership and exhaust the rank and file. It has nothing to do with Corbyn’s competence, and everything to do with his values. They are ideologically opposed to left-wing politics.

Interestingly enough, Cohen agrees. Not so very long ago, he wrote:

the English upper-middle class has always turned vindictive when the lower orders emerge from the underground and get ideas above their station.

Indeed Nick. And now, you are their lyricist. To paraphrase tiny Dennis Waterman in Little Britain: “you write the theme tune, you sing the theme tune.”

We aren’t falling for it

Cohen’s denunciation of working-class, left-wing voters may have excited the commentariat. But it induced no such reaction outside his echo chamber.

.@JamesSorah @garyfoskett Poor old Nick Cohen, like Mel Phillips, he just hates everyone. Which is fair enough as it's entirely mutual.

Cussing of a naughty 12 year old and politics of a gobby invertebrate.

Don't tell me you weren't warned about Nick Cohen. pic.twitter.com/M6PzGV3csf

It is clear that the Guardianistas are unamused with working-class Britain getting back into politics. The truth is that they preferred the management school politics of the previous decades. Never mind that the failures of that type of politics led us to a devastating global financial crisis, ideological austerity, and a resurgent far right.

Bottom line: their protestations are all sound and fury, signifying nothing. They have no big ideas. They have no alternative candidate. They have no fidelity to the principles that founded this nation’s greatest achievements: the NHS, our education system, and our social housing programmes. They are a spent force in politics, filling the empty silence with tears and tantrums. Shame on them for their betrayal of all those who depend on them to do better.