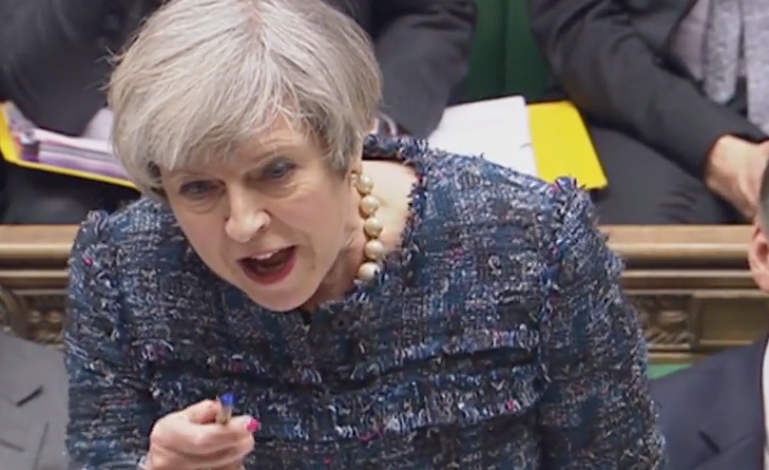 Jeremy Corbyn clashed with Theresa May at Prime Minister’s Questions (PMQs) over education funding. And one thing is clear. Either the Prime Minister is lying, or she is accusing headteachers across the country of lying.

This government is cutting the schools budget by 6.5% by 2020. And today we learn that the proposed national funding formula will leave a thousand schools across England facing additional cuts of a further 7% beyond 2020. Can the Prime Minister explain to parents why cutting capital gains tax, cutting inheritance tax, cutting corporation tax, cutting bank levy are all more important than our children’s future?

Theresa May responded with platitudes:

This government is committed to ensuring all our children get the education that is right for them, that all our children have a good school place… We’ve protected the schools budget. And the national funding formula is a consultation.

But Corbyn pushed her further:

But Corbyn attacked what the government is doing to a generation of young people:

And May responded with the same platitudes:

She then tried to distract attention from the issue by speaking about division in the Labour Party.

But either Theresa May is lying. Or she’s accusing teachers of lying. As The Canary previously reported, hundreds of schools across the country have written to parents about the impact of cuts to their budgets. And a letter from a Cornish school stated:

Meanwhile, according to the Association of School and College Leaders (ASCL), schools are being forced to cut subject choices for GCSE. 44% of the 1,000 members polled revealed they have cut Design and Technology. And 26% cut performing arts courses.

At the same time, schools are dealing with leaking buildings, out-of-date technology, and are having to cut back on things like school trips. But essential support services are also being cut. 95% said that this included reduced spending on books, special needs and mental health support, and IT.

Reduced budgets means fewer staff and, with fewer staff, class sizes have to increase. Schools cannot sustain the level of support they provide to pupils, or the range of subject options and enrichment activities.

This was a pathetic performance from May. All she could do was repeat the same lines which have no substance in reality. She had no evidence to back up her claims. Because all the evidence is the opposite. Schools are facing massive cuts, teachers are being made redundant, and children are no longer able to access vital support services.

Everyone who works in a school or has school age children know this. We can all see the day-to-day impacts that budget cuts are having on our children’s education and our children’s future. Our children’s schools do not need soundbites, lies and smug diversions over Labour Party unity. They need funding. And they need it now.