Met Police: our own boss is a 'significant witness' to Westminster 'terrorist' incident - Canary 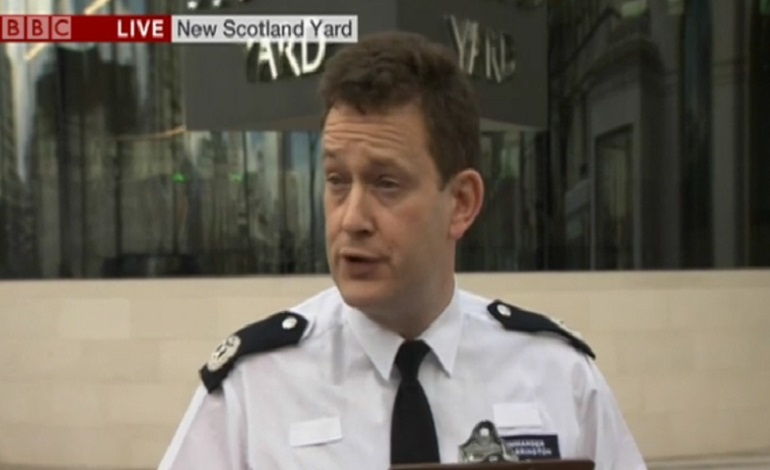 The Metropolitan Police Service (MPS) gave a press conference just before 5pm on Wednesday 22 March, in relation to the alleged “terrorist” incident near Westminster. And it was revealed that the Acting Commissioner of the Met is being treated as a “significant witness”.

A spokesman for the MPS said [from 16:44] that the Acting Commissioner of the MPS, Craig Mackey, is being treated as a “significant witness”, as he was at Westminster when the alleged attack took place. The spokesperson said:

Whilst he is not injured, it would be inappropriate for him to be here to talk about the incident at this stage. Our thoughts and his thoughts are with all of those involved and responding to that incident… I would stress that, if anyone has information about today’s incident, they are urged to call 0800 789321.

Since 2.40pm this afternoon the MPS has responded to an incident in the area of parliament square… The Senior National Coordinator has declared this a terrorist incident. And although we remain open minded to the motive, a full counter terrorism investigation is underway… led by the Met’s counter terrorism command at this stage. I will confirm what’s happened but I will not speculate.

“A person in the river”

He went on to say that they received a “number of different reports which included a person in the river; a car in collision with pedestrians, and a man armed with a knife”. Additional officers, including ones with firearms, were “deployed” to assist police who were already in the area.

He said of travel in London:

I’d like to repeat our request for the public to avoid the following areas: Parliament Square, Whitehall Westminster Bridge, Lambeth Bridge, Victoria Street up to the junction with Broadway and the Victoria Embankment up to Embankment tube station. This is to allow emergency services to deal with this ongoing incident.

The Met spokesperson repeated the request for anybody who has images or film of the incident to pass those to the police.

He then spoke about what the Met knew about victims:

We know there are a number of casualties including police officer but at this stage we cannot confirm numbers or the nature of these injuries. Our response will be ongoing for some time and it is important we gather all possible information and evidence. Public safety is our top priority, and we are reviewing our policing stance across London and thorough the capital this afternoon. There will be additional officers on duty and deployed across the capital. I would like to ask the public to remain vigilant, and let us know if they see anything suspicious, that causes them concern and if they do to call 999 immediately.

When pushed by the surrounding media, he wouldn’t speculate as to whether the incident was over or not, saying “it’s our priority to keep London safe”. “I’ve told you what information we have… I’m not prepared to speculate,” he concluded.

The Metropolitan Police said they were treating the incident as a “terrorist” one, until they “know otherwise”.

A man was shot and several people were also run over on Westminster Bridge during the incident, which began at around 2.45pm.

BBC News has reported that one woman and the police officer have died. It says “a number of others have been hurt – including some with ‘catastrophic’ injuries – in the incident”. Both Houses in Westminster, the Scottish parliament, and the Welsh Assembly have all been suspended.

Police are appealing for any members of the public who may have images or footage of the incident to send them to this address: www.ukpoliceimageappeal.co.uk