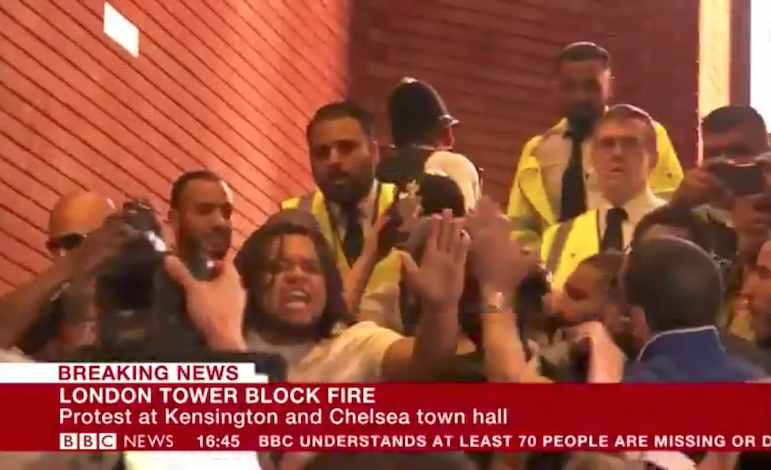 Police have come in to remove people from the council building pic.twitter.com/sDhtcAJakS

Latest scenes from the #GrenfellTower protest where people have now forced their way in to Kensington Town Hall pic.twitter.com/yQVJaqXLKl

Outside, protesters have gathered to call for justice:

They were demanding that a senior council leader come to speak to them. Instead, the council’s Head of Communications gave them a written response. But many protesters were clearly unhappy with that response:

The protesters also demanded that the council release funds to help those affected. The council statement said:

We are already releasing funds to look after the immediate effects of all those affected.

And the protesters asked for a list of the number of people in Grenfell Tower. The council said this was a matter for other authorities, but it would try to provide a number by the end of the day.

Mounted police are reportedly at the scene.

A fire broke out at Grenfell Tower in the early hours of 14 June. Residents had raised safety concerns for years, but claimed their voices had fallen “on deaf ears”.

This is a developing situation. The Canary will be posting updates.