With just one word, the UK's oldest MP cuts through every last shred of Tory/DUP bullsh*t [VIDEO] - The Canary 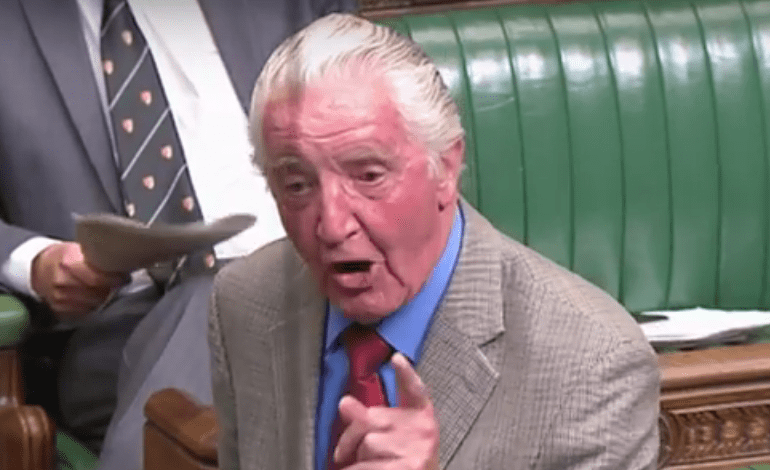 With just one word, the UK’s oldest MP has cut through every last shred of Tory/ DUP bullsh*t. In parliament, Labour’s Dennis Skinner branded the Conservative and Democratic Unionist Party (DUP) deal a “racket”:

This impasse in Northern Ireland has been complicated by the fact that the result of the general election has meant that the government has had to get involved in a protection money racketing system of about a billion pound.

Theresa May lost her majority in the general election. So now she’s bought one from the extremist DUP for £1.5bn.

Skinner then pointed out the only obvious solution:

The only way to get rid of that, may I say as a suggestion, is for the Prime Minister to call another general election.

The unsustainable weakness of May’s position has already materialised. Just days into the deal, the sitting Prime Minister has been forced to plead with the Lib Dems for backing on crucial healthcare policy. Risking further electoral oblivion, the Lib Dems have reportedly said they may back the Conservatives on a case by case basis.

We know that she’s frightened to death… because she knows that the Labour Party would win… We’d get rid of this almighty mess, there’d be no protection racket… and we’d have a decent Labour government that’d get rid of austerity. Get on with it.

The imminent prospect of an anti-austerity Corbyn government has terrified the Conservatives, says Skinner. Their only option was to strike a deal that ‘jeopardises’ the peace process in Northern Ireland.

I think the problem now is that the peace process is likely to be sacrificed in order to save Theresa May’s skin. And that’s a terrible business, because we’ve gone through 20 years now of bringing peace and stability and prosperity to Northern Ireland. All that, in my view, is now being jeopardised by this deal

The Conservatives have promised £1.5bn to buy time in what Skinner calls a “protection racket”. The party of privilege hopes Labour’s momentum will wither away if it can cling to power for long enough. Analysts predict May will be offered as a sacrificial lamb in the hope of blaming the recent catastrophic failings of the party on one individual. The Conservative Party will then present itself as reinvented.

But given that the Corbyn-led movement appears to have won the most important battle, it’s hard to see how the Conservatives will recover. Now that May and the Tories are backtracking on austerity, the Corbyn movement seems to have won the battle of ideas. After that victory, it’s only a matter of time before the economic orthodoxy is toppled. It’s no wonder the establishment party is “frightened to death”, as Skinner points out.