Dennis Skinner video-bombed a journalist's interview. It did not end well for the BBC [VIDEO] - The Canary 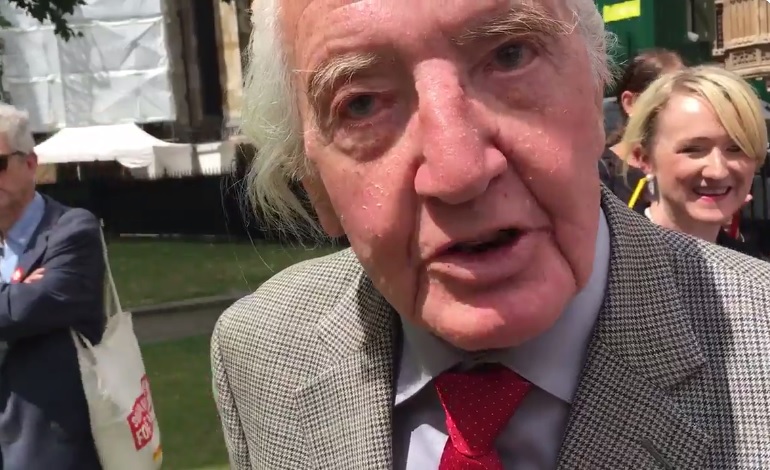 The UK’s oldest MP, Dennis Skinner, has video-bombed an interview with Independent journalist Simon Calder, who also contributes to the BBC. And the incident did not end well for the BBC, or for British Airways (BA). A current strike by the airline’s workers was the focus of the interview with Shadow Chancellor John McDonnell.

But McDonnell barely got a word in as the Beast of Bolsover struck again.

Here’s what happens when you ask the Shadow Chancellor for a solution to the BA strike, and Dennis Skinner MP is behind him: pic.twitter.com/h6oO98dIHJ

Calder, The Independent‘s travel editor and correspondent – who also appears on the BBC – interviewed McDonnell for The Independent on 12 July. Cabin crew were holding a rally outside parliament. Calder and McDonnell were talking about the current two-week strike by BA’s Mixed Fleet workers. Staff have planned another strike of the same length, starting on 19 July. The long-running dispute is over “poverty pay” and the company’s decision to withhold certain benefits from workers who choose to strike.

Here we are, the country’s in a right old mess. And yet here we have a group of workers who simply can’t reach an agreement. What can we do to sort this out?

Before McDonnell could answer, however, Skinner jumped in:

No, it’s a group of management that won’t reach agreement… It takes two to get a strike. Always remember that. But you, as being part of the BBC establishment, don’t fully understand. You can’t have a strike unless there are two sides to it.

At this stage, Skinner stopped talking as cheers erupted among the strikers present. Chants of “Dennis, Dennis, Dennis” eventually broke out in the crowd.

Where do you stand?

Calder’s questioning clearly blamed the workers for not being able to find a solution to the dispute. But as Skinner pointed out, some believe BA’s bosses are at fault. In fact, that’s the official position of the Labour Party. It has backed the striking workers and introduced an Early Day Motion that:

acknowledges the significant pay package of £6.5 million to the boss of the airline’s parent company, International Airlines Group [and] contrasts that package with reports that the starting basic pay of a member of Mixed Fleet cabin crew is roughly 533 times lower than that figure.

McDonnell also vowed at the rally that, once in government, Labour would forbid airlines from using other companies’ planes and staff during strikes. BA is using jets and crew from Qatar Airways during the strike. The Department for Transport approved BA’s use of the Qatari services in June. UK allies, however, such as Saudi Arabia and the UAE, severed ties with Qatar in the same month over its alleged connections to “terrorist and sectarian groups”.

The Tory government allowing BA to continue its operations during the strike puts the workers at a disadvantage. Because the company is unlikely to move on its negotiating position if the strike doesn’t impact on its business. Indeed, BA claims it is operating 99.5% of its services during the action.

A BA spokesperson called the strikes, organised by the workers’ union Unite, “unnecessary”. Referencing a pay deal offered in May, which is worth 7% over three years, the spokesperson said:

It seems extraordinary that a trade union should ask its members to give up their pay and benefits for virtually the whole of July, trying to target the holidays of hard-working families, rather than give those members a chance to settle the central issue of the dispute.

The BA workers, though, obviously do feel that the strike is ‘necessary’ because of the actions of BA. And as the video above shows, Skinner, McDonnell and the Labour Party in general have their backs.

– Join The Canary if you’d like to support our work.