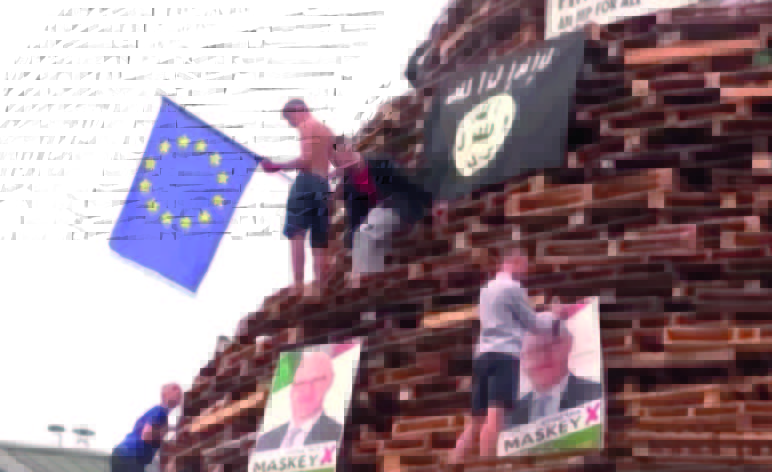 Loyalists set fire to Eleventh Night bonfires across Northern Ireland on 11 July to celebrate the anniversary of the Battle of the Boyne. These bonfires have at times been flash points for both sectarian and ethnic violence and hatred. This year saw bonfires decorated with political effigies, posters of rival political factions, racist messages, and Irish and EU flags.

Although the DUP has condemned these instances, they’re still happening. And this simmering tension is important to acknowledge. Because the government’s deal with the DUP has the potential to undermine what peace has so far been achieved in Northern Ireland.

Obviously, there’s nothing wrong with tradition. And it’s not the case that every bonfire covers itself in hateful displays or ends in a regrettable incident.

It is the case, though, that several of the things that happened this year were not OK. Some of which related to safety – with air pollution becoming dangerously high, and people in surrounding houses suffering structural damage; some of whom were pensioners and young families who have been described as “terrified”.

Other factors were more directly unpleasant. These included a racist banner directed at a Celtic football player:

Promotional posters of a Sinn Féin candidate alongside a Daesh (Isis/Isil) flag:

My posters have been placed on top of a bonfire. I have reported this hate crime & theft to PSNI to allow them to act urgently. pic.twitter.com/Qu9WuD0SeZ

And an effigy of the late Sinn Féin politician Martin McGuinness in a coffin that read “FUCK THE IRA”:

Son of Martin McGuinness said he was not brought up to hate after 'coffin' effigy placed on east Belfast bonfirehttps://t.co/lBPZwInXcz pic.twitter.com/IOlIt9ifmN

I am very thankful that I was raised by parents never to hate anyone or anything. [Michelle O’Neill] is right, the annual display of hate must end.

This is the action of hatemongers intent on indoctrinating bigotry and perpetuating sectarian divisions in our society.

He also said unionists must call “for an immediate end to these sickening displays”.

The DUP – including its leader Arlene Foster – has condemned what happened this year. Speaking about the McGuinness effigy to The Impartial Reporter, Foster said:

I do condemn that because it is not the way in which we celebrate our culture.

It is wrong and it shouldn’t have happened.

She has also said that bonfire builders should be “respectful of their neighbours” and “not play into the hands of those who want to demonise the culture”.

The important thing to note here is that sectarian hatred still exists in Northern Ireland. And while it’s good that politicians condemn it, that may not be enough.

The reason it’s important to take note is because Northern Ireland has managed to achieve a very delicate balance. A peace process which is welcome but still not solid enough to take for granted.

The Conservative government is doing nothing to help that process. In fact, by doing dodgy billion-pound deals with the DUP, it’s hindering it by upsetting the balance. This may temporarily be in the Tories’ interest, but could have negative long-term repercussions for everyone else.

– You can also read more on the DUP from The Canary here.