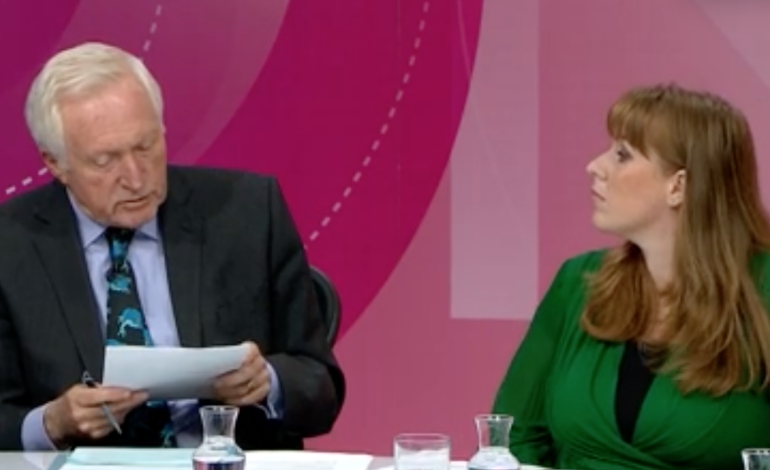 David Dimbleby has helped to reinforce Tory spin invented about Jeremy Corbyn on BBC Question Time. During a discussion on tuition fees, Conservative MP Damian Green repeated [36:21] the claim that Corbyn had promised to wipe out student debt for existing graduates.

But when Shadow Education Secretary Angela Rayner attempted to answer the point, Dimbleby interrupted her to repeat the Conservative line.

We didn’t say that.

Jeremy Corbyn said… ‘I don’t see why those who had the misfortune to be at university in the £9,000 period should be burdened excessively compared to those that went before or those that come after. I will deal with it.’

Again Rayner tried to respond, but Dimbleby again interrupted her.

Rayner was still not allowed to respond, though. She started by saying [37:09]:

But you’re quoting one little element of the whole interview.

She was interrupted by laughter.

You can watch part of the exchange here:

Angela Rayner deals with Green's lie on student debt with a cutting comment about the Tory manifesto #bbcqt pic.twitter.com/kAvHx3hZBY

And this tweet gave the context that Rayner wasn’t allowed to give:

Last night’s debate was conducted fairly and appropriately. When Damian Green raised the issue, David Dimbleby read out the quote in question and then asked Angela Rayner to respond, which she did – precisely the role of the Question Time chairman.

Labour made a clear commitment in its manifesto to abolish tuition fees; a promise it stands by. But Corbyn was questioned by the NME during the election campaign about existing debt. He said:

I don’t have the simple answer for it at this stage… because this election was called unexpectedly… And I don’t see why those that had the historical misfortune to be at university during the £9,000 period should be burdened excessively compared to those that went before or those that come after. I will deal with it.

Context is everything, though. Corbyn recognised that abolishing new student debt could be unfair for existing students. But he didn’t say he’d wipe it out. He said he didn’t yet have an answer.

Instead of allowing Rayner to explain the context, Dimbleby repeated the Tory spin. And that is a disgrace.

This article was updated at 18:05 on 6 October to include a comment from the BBC.