The First Secretary of State has launched a foul attack on press freedom. And it cannot go unanswered. [EDITORIAL] - The Canary 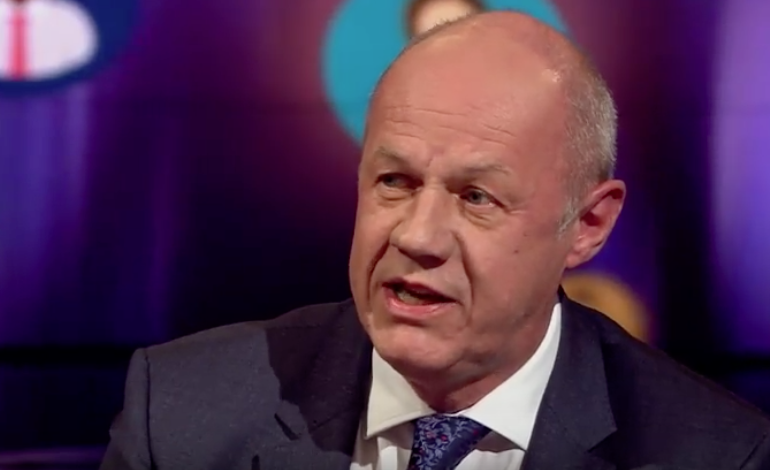 First Secretary of State Damian Green has launched a foul attack on new media outlets which cannot go unanswered. Green accused outlets like The Canary and The Skwawkbox of potentially inciting the murder of politicians like Labour’s late Jo Cox. Here’s why his cynical and ridiculous attack could not be more wrong.

The peddling of hate

Speaking to a swanky lunch for the mainstream media press pack, Green hit out at their rivals in new media. Green accused new, independent, progressive outlets of “feeding an atmosphere of increasing hatred which at the most horrible of extremes led to the killing of Jo Cox”. Websites, he said, need to think more about “who is reading it and what are they going to do next”.

Labour MP Jo Cox was brutally murdered by a man of the far right. As he took her life, he reportedly shouted ‘Britain First’, echoing the anti-immigration, Islamophobic organisation of the same name. Jo was killed by a racist man with Nazi sympathies. For decades, such hateful ideas have been actively promoted by mainstream outlets like The Sun and The Daily Mail. Day after day, these outlets attack ethnic minorities, immigrants, LGBTQ+ communities and people who rely on the welfare state. 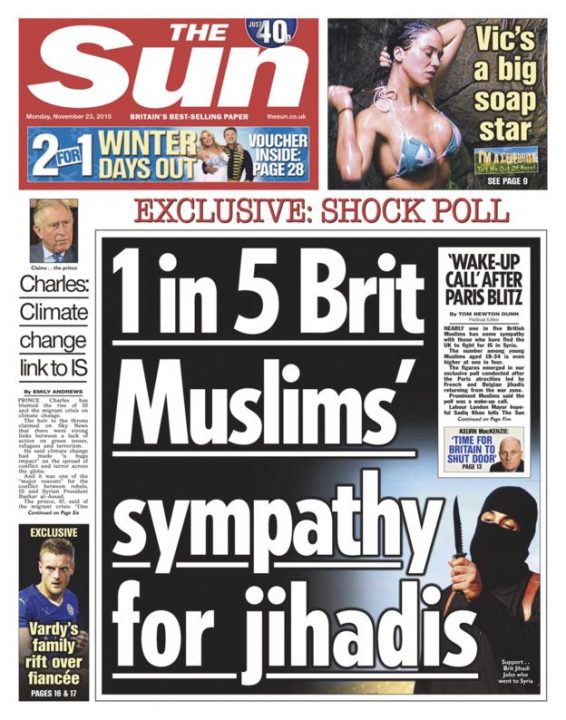 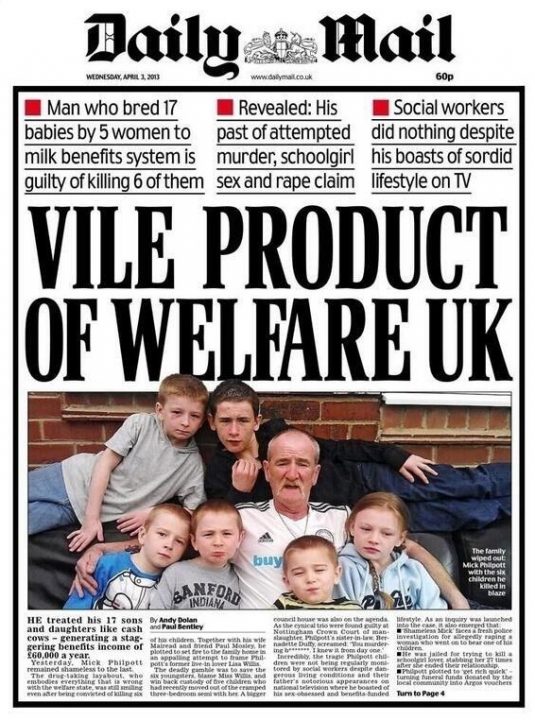 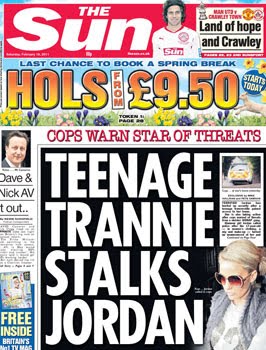 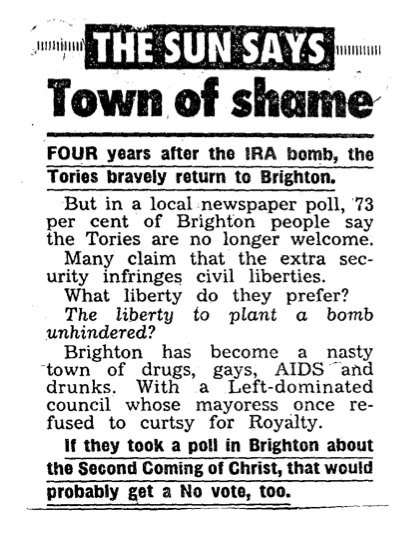 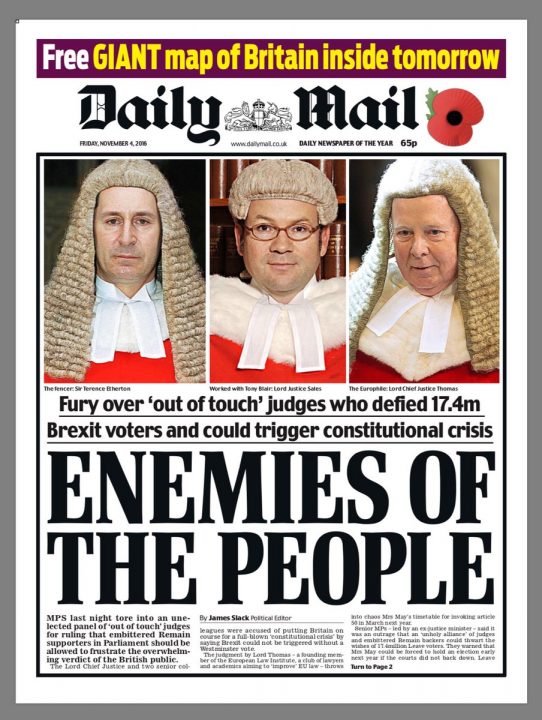 Instead of speaking out against these billionaire-backed peddlers of bigotry, Green aimed vitriol at our country’s handful of independently-owned, progressive news outlets. In the case of The Canary, about the only major media outlet in the UK with a gay woman of colour as Editor-in-Chief.

Green was speaking in the same room as journalists from across the mainstream media. He could have made a stand against bile-filled hate-rags like The Sun and The Daily Mail there and then. But instead, he chose to tickle their bellies and lash out at the only news organisations actually making a stand against them.

Some members of the right-wing press repaid Green for his dutiful service with coverage of his comments. The Telegraph led with this: 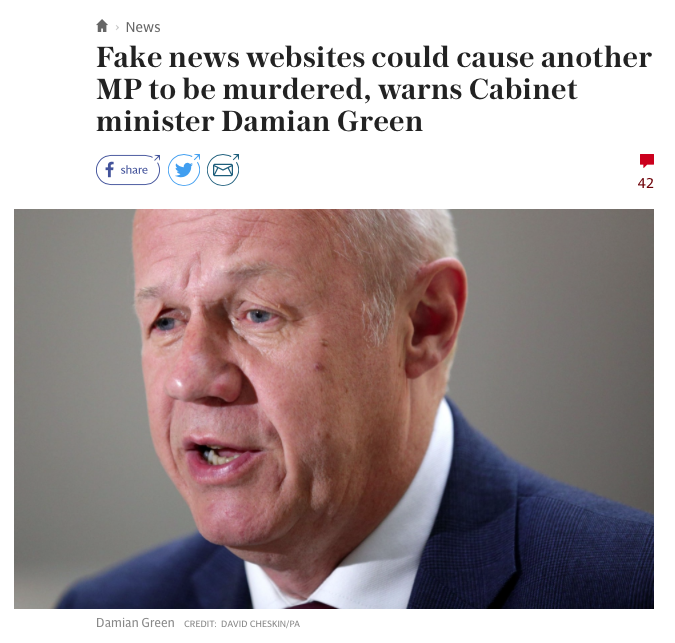 Nowhere, in any story or headline at The Canary, do we incite people to violence; in jest or otherwise. The same cannot be said of The Telegraph, which just months before called for the beheading of “liar” and “traitor” Nicola Sturgeon. 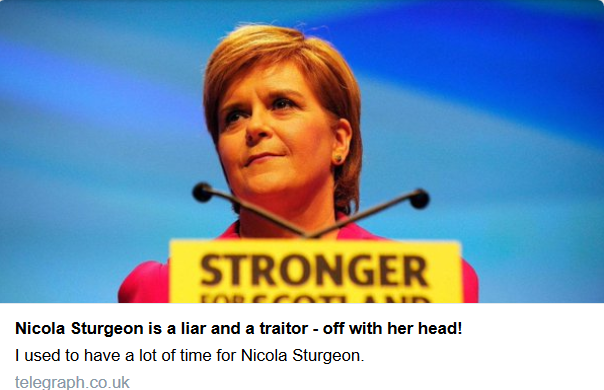 The Telegraph later changed the headline, but continued to brand Sturgeon “another treacherous queen of Scots”.

Yet Green deemed this kind of incitement unworthy of mention.

Green derided The Canary and new media outlets as “unscrupulous blogs and websites that have no regard for any attempt to check the truth”. This is also patently untrue.

The Canary has published more than 5,000 articles since launching two years ago. Thanks to our five-stage process and robust editorial team, almost all were on point. But inevitably, we make mistakes. And when we do, we clean it up. It is our guiding principle that a news organisation should make its corrections at (at least) the same volume as it makes its mistakes. First, we update the article itself and include the correction prominently. Next, we repost the article to our social media as a pinned post, meaning it is the first thing people see on the page. We explain what we got wrong and how, and we apologise. That post remains pinned in place for 48 hours.

We also voluntarily signed up to the independent press regulator Impress. This means that, if we have not fully satisfied anyone who feels harmed by an incorrect story, they have full recourse to hold us to account.

The same is not true of the media outlets in the room with Green. They are effectively self-regulated, through the discredited Independent Press Standards Organisation (IPSO). As Steven Barnett recently wrote for industry magazine Press Gazette:

IPSO is funded entirely by the shadowy Regulatory Funding Company (RFC) which is dominated by a handful of national and regional publishers.

The RFC writes the rules which dictate what IPSO may or may not do, and (as then RFC chair Paul Vickers made clear to the House of Lords Communications committee) must approve any rule changes.

IPSO’s rules are therefore written and controlled by the very newspapers it purports to regulate “independently”.

One of the great failures of the Press Complaints Commission was that, in the words of Leveson, “a few powerful individuals have been able to dominate the system”. Nothing has changed.

The Sun’s Trevor Kavanagh sat on the original “Foundation Board” (itself organised by the industry), which then appointed a panel (via a secret process) which in turn appointed the Chair and Board of IPSO – which now includes Trevor Kavanagh. The RFC has control over “industry representatives” who are nominated by them.

The truth is that we set up The Canary precisely because of the failings of our established media, and the impact that was having on our politics. For decades, politicians and the press have become an ever cosier class. When our country needed a Fourth Estate holding power to account, it was instead fed a diet of celebrity gossip, paparazzi, phone hacking, hoax health stories like the MMR vaccine debacle, and a sea of bigotry and scapegoating.

Now, that narrative is under threat. New media outlets are springing up across the country and the world, and they are presenting the other side of the story. We are shining a light on the innovation, the cooperation, and the courage of ordinary people. And we are holding authority figures like Green to account for their words and their actions. Establishment politicians and press pack alike no longer have a stranglehold on information.

Little wonder, then, that Green and the old press found common cause at their lunch in Westminster. What an accidentally perfect metaphor for the cosy relationships that new media seeks to shake up.

Our mission is to disrupt the hateful messages of the right-wing UK press, reminding people that we have more in common than our superficial differences. By disrupting those messages, we have helped to change the public conversation. This will always be threatening to those who benefit from an unjust status quo. But we couldn’t be more proud of our contribution, or more grateful for the support we have from our millions of readers to keep on keeping on.